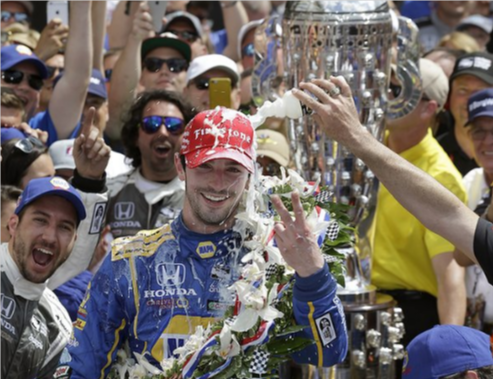 The Indianapolis 500 is always once of the most exciting sporting events of the year. Sunday, the Indy 500 took that notion to a whole new level.

Alexander Rossi was considered a long shot to win the race. The 24-year-old Californian was given 66-to-1 odds. He didn’t let any of that bother him, however. He not only won the historic 100th edition of “The Greatest Spectacle in Racing”; he couldn’t explain how he staged a memorable heist in Hoosier country:

“I have no idea how we pulled that off,” Rossi told the Associated Press. “It’s an amazing result for Andretti Autosport.”

Near the end of the race, Rossi relied on fuel strategy to take the checkered flag. While his opponents stopped for one last fuel-up, Rossi stretched his tank thin. Carlos Munoz, a heavy favorite and the 2013 Indianapolis 500 Rookie of the Year, had to stop for gas toward the end with almost everyone else.

The 24-year-old Munoz was the last man with a chance of catching Rossi. He felt this was his time to win in Indianapolis, having finished second at The Brickyard in 2013 for Andretti Autosport. Rossi might have been a teammate under the Andretti umbrella, but this event is powerfully important for the individuals involved. Munoz didnt want to finish second again; he made one final push towards the end, but Rossi held him off. Munoz fell short despite the fact that Rossi’s car was running on fumes.

This is how deeply the result affected Munoz, a young star with an extremely bright future in front of him: 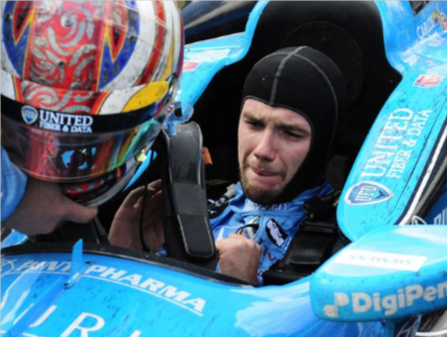 Munoz was outfoxed by a rookie who displayed a level of resourcefulness far beyond his years.

When he finished his last lap, Rossi had stretched his tank to 90 miles to cycle and was racing at a pace of 179.78 mph, which is slow by Indy car standards. As a result, he ran out of gas once he finished the race and his Honda was towed to the victory celebration.

“We rolled the dice and came through and made it happen. This is unbelievable. I have no doubt it’s going to change my life,” Rossi said.

While Munoz was happy for his teammate and impressed by Rossi’s strategy, he was still disappointed in his second second place finish in four years.

With Munoz and Rossi finishing 1-2, Andretti Autosport had a lot to celebrate. Rossi was persuaded to come back to the states to drive for Bryan Herta, who had partnered with Andretti. Herta was the owner of Dan Wheldon’s winning car in 2011, which was the 100th anniversary of the first Indy 500 race in 1911. Now, Herta and Andretti can celebrate not only Herta’s win on the 100th anniversary of the first race, but also their joint victory in the 100th edition of the race as well.

And he will drink milk! #Indy500 pic.twitter.com/0Do0bfqKAM

Rossi, still awed by what he had achieved, remained overpowered by disbelief:

You could very literally say that on the afternoon of the Indianapolis 500, auto racing brings the winner of this race to his knees: 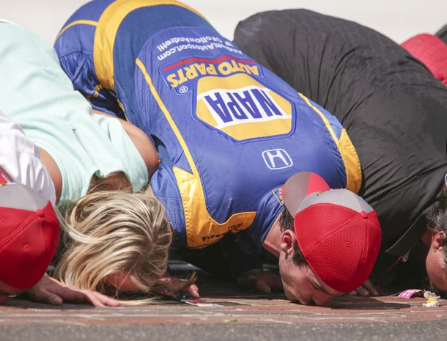 Rossi is the 70th winner in Indy 500 history and the will be the 103rd face enshrined on the famous Borg-Warner Trophy.