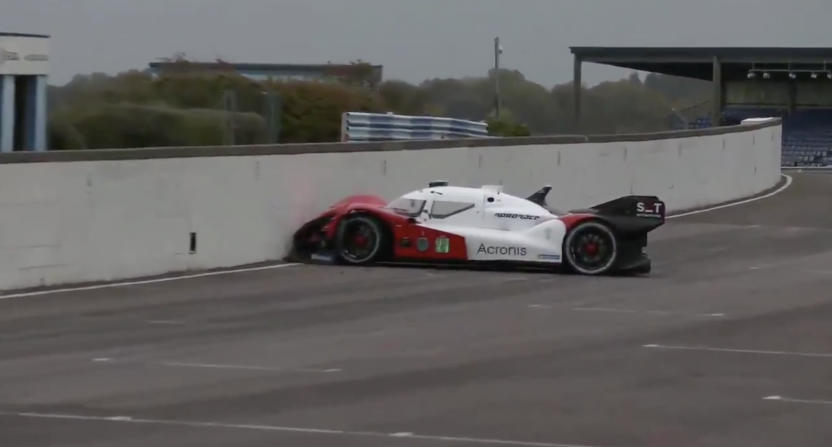 AI has been able to replicate so many things human beings can do that it’s getting a bit creepy, but racing cars isn’t one of them. At least not yet. Video surfaced of a self-driving race car accelerate from a stopped position, hang a right turn on a straightaway and drive itself straight into the wall.

During a beta test for the Roborace autonomous racing series, it was revealed by one of the engineers that something happened on the initialization lap (driven by a human) that caused the steering to lock to the right. Even though the program was trying to get the car to correct itself by turning left, it couldn’t, and drove into the wall.

In a way, it’s kinda hilarious to see what happened because it kind of looks like what happens when your controller disconnects in a racing game. Obviously, the most relieved group of people after seeing this video were race car drivers who suddenly developed an added layer of job security.

Every race driver in the world needs to retweet this https://t.co/YU62WoU7kD

Atleast we know our profession is secure for a little while longer! https://t.co/fgamUp22gN

Think our careers are safe for a little longer 👍🏼 https://t.co/Jq4eUmMqQs

This is what it deserves 😂😂 https://t.co/7PQqUHl2dY

We’re all laughing at the robot car now, but wait until someone from Boston Dynamics gets their hands on one 🤷‍♂️🤖 https://t.co/YIlY6EfuYe

In all honesty, even if AI can efficiently drive a race car, drivers aren’t going away from racing anytime soon. Fans root for people, not things, so a racing series without drivers is pretty pointless.

In fact, the testing and development going on here isn’t exactly for racing purposes but for the hope that autonomous cars can one day be reliable enough for the cars we drive. Throughout the entire history of auto racing, innovations such as the rear view mirror, disc and anti-lock brakes, fuel injection, and seat belts, all things we think are no big deal in our cars today, were tested in racing conditions way before they became standard in the cars we drive every day.

In modern racing, the focus has been on developing alternative power sources for vehicles such as hybrid, diesel, and electric power. And in 2024, a hydrogen powered car is expected to attempt the 24 Hours of Le Mans with the hopes that one day it becomes an alternative for fossil fuel.

For all our sakes, if autonomous cars are someday going to be a thing, it’s best to get these bugs out of the way now and on a closed course instead of it suddenly hanging a right turn at a red light.