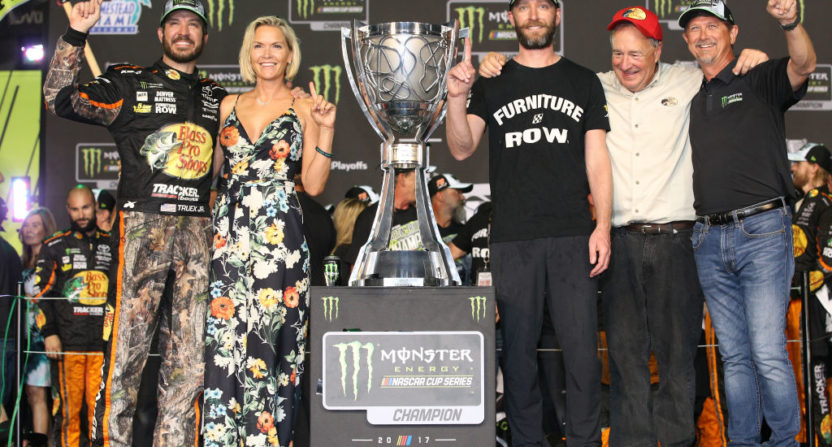 On September 4, 2018, Furniture Row Racing team owner Barney Visser announced that he would shut down his team at the end of that current season. The possibility of the team shutting down had always been rumored if the team couldn’t get enough sponsorship for the entire 2019 season. But when that happened, it still shocked the NASCAR world.

Furniture Row Racing wasn’t just any team. Entering their final season, they were the defending Monster Energy NASCAR Cup Series champions. This was a top team who was a legitimate contender to win every week and was competitive up until the very end. In their last race at Homestead-Miami Speedway, Martin Truex Jr. was trying to send the Denver, CO-based team off into the sunset with back-to-back championships. Unlike Broncos legend John Elway winning back-to-back Super Bowls before he retired, Furniture Row Racing fell just short in accomplishing that feat before shutting down for good. Truex finished second to Joey Logano at Homestead.

In this rags to riches journey, Furniture Row Racing accomplished something that doesn’t happen that often in NASCAR anymore. This single-car team started from humble beginnings, usually occupying the back of the grid, trying to make ends meet with the resources they had. While more established teams had multiple cars in which to get more information from, had hundreds more employees to develop the latest chassis that would make their car just that tiny bit faster or had access to the most modern technology to try and find an edge over the competition, Furniture Row Racing did it their own way, defied the odds and became a championship-contending team within their first 10 years of existence.

Now that Furniture Row Racing has ceased operations, it’s time to remember what impact this team has had in the sport and where this team fits within NASCAR history. A team based out of Colorado consisting of a crew chief from Canada, a driver from New Jersey, and team members from all different corners of the world, this is the story of Furniture Row Racing: The team of outsiders who took over NASCAR.

Furniture Row Racing began operations in 2005, and to say they had a rough start would be an understatement. The team who had Visser’s “Furniture Row” company on his cars as sponsorship would usually lounge in the back of the pack. It honestly wasn’t a surprise; the team was underfunded and weren’t immediately going to compete against the top teams of the sport. In their first season, Kenny Wallace and Jerry Robertson each piloted the car for a single race in the 2005 season and failed to finish in the top 20 until 2008.

While Furniture Row Racing typically finished toward the rear, the team never became a “start-and-park” car, the term put on teams who either choose to run a few laps or cannot complete a race due to limited resources and enter races to collect prize money in hopes of improving their situation in the future.

It would be in 2011 where Furniture Row Racing would show solid growth on the track. The team had great finishes in the crown jewel races. A seventh in the Daytona 500, eighth in the Coca-Cola 600, and a third in the Brickyard 400 were impressive showings, but that was nothing compared to what they did at Darlington.

Grabbing the lead on Lap 360 and holding off Carl Edwards, Regan Smith and Furniture Row Racing celebrated their first career win at the Southern 500, one of the most prestigious races in the sport.

It was at this point where the team finally turned a corner. It was Darlington that put them on the map and got the sport to notice this small team pumping out solid finishes. This win, along with bringing on Todd Berrier as crew chief and hiring Kurt Busch at the end of 2012, meant that business picked up according to team owner Barney Visser.

“I always thought we could [be an elite team],” Visser said in a press conference before Homestead. “For the last five or six years I knew we could. We knew we were building fast race cars and progressing in the right direction. Regan [Smith] won at Darlington, beating Carl Edwards to the finish. That showed everyone that we could build fast cars. Because of that we kept on attracting good people and eventually joined forces with Toyota and forged a successful technical alliance with Joe Gibbs Racing. The chips were starting to fall in the right place and our record of reaching the final four in three of the last four years is a pretty strong statement about the caliber of our team.”

“I think the real serious turning point [to the team] was when [crew chief] Todd Berrier came to Denver to join our team [July, 2012]. He raised the quality of our race cars and operation. He just brought a lot of things to us, and because of him, we started attracting more good people. We heard that Kurt [Busch] wanted to work with Todd, so we brought in Kurt. Todd and Cole [Pearn] came as a team. So with Todd, Kurt and Cole we had a strong nucleus and knew we were headed in the right direction. We became the first single-car team to make the playoffs with Todd, Cole and Kurt in 2013.”

Busch piloted the Furniture Row Chevrolet for the 2013 season, and while he was unable to win while in the 78, he amassed 11 top 5’s and 16 top 10’s. When Busch went to Stewart-Haas Racing, Visser looked at Martin Truex Jr.

Truex was at a crossroads in 2014. After a controversial move at Richmond to try and keep Truex in the Chase eventually led to the downfall of Michael Waltrip Racing, Truex was looking for a new home and found Visser and Furniture Row Racing. It wasn’t exactly Truex’s fault, and no one can prove that he was even aware of what was going on, but as the one who benefited the most, he got punished pretty heavily. You could say the two needed each other at that time and may not have been as successful if Truex had gone to another team and Furniture Row had gotten another driver. That partnership would more than pay off in the years ahead.

After a rough 2014 season, the team really got it together in 2015. Truex, along with crew chief Cole Pearn, won at Pocono and finished fourth in points. Furniture Row Racing went to Toyota in 2016 and won four races, including another Southern 500 victory as well as displaying the kind of dominance we may never see again. At the longest race of the year, the Coca-Cola 600, Truex led for 392 of 400 laps. Kyle Busch came close this year, leading for 377 laps and winning, but even that couldn’t touch Truex’s dominance that night. On that night, Truex led for 588 miles, longer than the distance of the other 35 races on the schedule.

This partnership between Pearn and Truex was crucial in Furniture Row’s success. Both people admitted that things weren’t perfect when they started working together in 2014, but like any relationship, they worked on things and they both got better.

“[Our relationship has] definitely progressed,” Pearn said. “I think the fortunate thing is we’re both pretty easy going but driven people so we got along pretty well right away. It was just a matter of getting better. I had to get better and he had to get better and I think our whole team. We kind of like started really, we had a bad year in 2014 and kind of started at the bottom together. Really just, when you start at that level with somebody and then you grow and continue to have success and that builds upon it. Everything you’ve learned together, it really makes for a close relationship.”

“It’s [relationship with Pearn] been awesome,” Truex said. “He’s really been, for me, he’s been the guy who really transformed my career and taken me from a good driver to a great driver. Win a championship and [win] 17 races in three years. I mean, what we’ve done together has been amazing. Our first year together was tough in 2014. We basically tell everybody that we sucked together before we got good, and I think that just really helped us bond and form a strong relationship that if things get tough, we know how to deal with them. We’ve been there before. So it’s definitely helped us, for sure, to keep our eye on the prize and stay hungry and keep fighting hard for each other and just knowing what it’s like on the other side which makes the success a lot more fun and enjoyable but also keeps you working hard to stay there, which is what we’re trying to do.”

In 2017, everything clicked. With Erik Jones driving a second car, Truex and Furniture Row Racing doubled their win total from their previous best season. But the season came with some serious struggles that really tested the team.

One of the toughest days for Furniture Row Racing occurred at Kansas Speedway in 2017. The night before the race, team fabricator James “Jim” Watson suffered a heart attack and died at the age of 55. After something so unthinkable as that taking place less than 24 hours before you needed to race 400 miles, the team banded together and while racing with heavy hearts, won for Jim.

A few weeks later, Visser suffered a heart attack and needed to have emergency bypass surgery. While he would make a full recovery, Visser had to sit out the final two races of the season. Racing with heavy hearts once again, the team came together once again to give their owner the championship. Though Visser wasn’t able to attend and celebrate with the team, his Furniture Row Racing team went from the bottom to the top of the NASCAR world in just 12 seasons.

CLICK HERE TO READ ABOUT “THE PEOPLE” OF FURNITURE ROW RACING