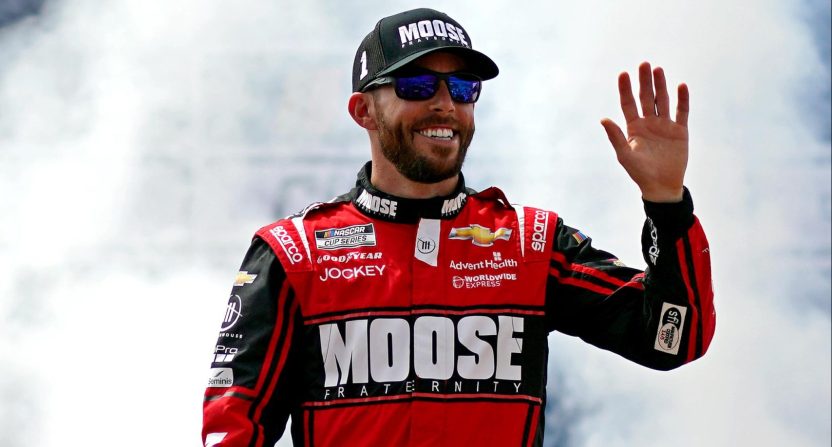 The Federated Auto Parts 400 took place in Richmond, Virginia on Sunday and before Kevin Harvick closed out his second-straight Cup Series victory, things got a little rough, and Chastain, who seems to have a habit of being involved in crashes with Joe Gibbs Racing drivers, was involved in some drama.

After finishing Stage 1 in first place, Chastain was in great shape. That is, until the No. 1 car made contact with Kyle Busch’s No. 18, at the start of the third stage. Both cars went spinning and Erik Jones and Martin Truex Jr. were also involved in the dust-up.

Jones had to call it a day after the crash while Chastain finished the race in 18th place and Busch finished in 9th place.

This crash comes a week after Chastain collided with Christopher Bell’s car, forcing the No. 20 Joe Gibbs Racing off the track. Ross has been involved in a multitude of crashes this season, including a previous run-in with Busch. He even caused two multi-car crashes at the Quaker State 400 in July, prompting fellow Cup Series competitor Denny Hamlin to call him out.

Hamlin and his team were vocal about Chastain’s driving again on Sunday. Per The Athletic’s Jeff Gluck, Hamlin’s crew chief Chris Gabehart was heard saying, “The latest caution is brought to you by Ross Chastain” in the style of a play-by-play announcer.

Denny Hamlin crew chief Chris Gabehart, in his best announcer voice: "The latest caution is brought to you by Ross Chastain."

Meanwhile, Busch told reporters after the race that they “got Chastain’d.”

"We got Chastain'd" this week."

Add Kyle Busch to the list of drivers not happy with Ross Chastain. #NASCAR pic.twitter.com/Oz9sJHUlzI

While the drama continues between Chastain and his fellow drivers, the NASCAR world offered some strong reactions to the latest Chastain-involved crash and its fallout.

Ross Chastain vs. Joe Gibbs Racing is currently the best rivalry in motorsports.

Chris Gabehart is a gem https://t.co/qAWSbGLLLp

"We were his victim this week." – Kyle Busch on Ross Chastain.#NASCAR

Woke: Ross Chastain putting more cars on the lead lap with a caution

All of the drama aside, Chastain remains in the Top 5 in the NASCAR Cup Series standings as the playoffs near.