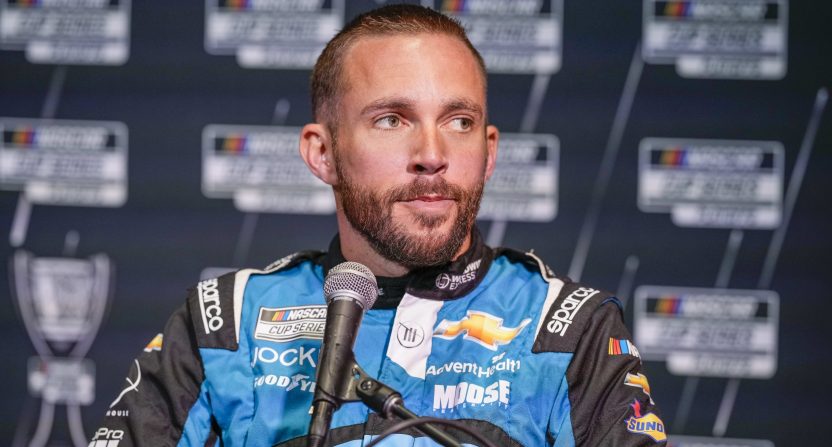 Ross Chastain was the center of attention in Phoenix on Thursday, as reporters pressed for more details on his incredible move at Martinsville Speedway last Sunday.

That unprecedented move, in which Chastain steered into the outside wall and floored the gas to pass two cars on the final lap to earn a spot in the championship race this Sunday, has been the talk of the NASCAR world ever since.

Four days later, Chastain is still as amazed as everyone else that it worked.

“I still don’t know why it worked,” Chastain said (via Zack Sturniolo, NASCAR.com).

Chastain said he learned the move playing Nintendo’s “NASCAR 2005: Chase for the Cup,” but transferring a video game feat to a real race track is easier said than done.

“I look back at it. I look at the physics of it,” Chastain said. “I have people explain to me what happened and what I felt and why that car did not slow down, why it kept air in the tires. Why the suspension — the right-front suspension broke. The right-front upper control arm is broken. But I was able to get across the line before I really could feel it. And then down into Turn 1, I just kept it pinned on the wall because it was broken.

“So why it worked? I don’t know, but I have no ideas or plans to ever do that again because it was not pleasant.”

While the amazing lap made Twitter buzz and will replayed in NASCAR highlights for years to come, many observers have been critical. Driver Kyle Larson said earlier this week Chastain’s move was, “Not a good look. … It’s embarrassing.”

More drivers checked in on the issue Thursday, and while they were diplomatic in their response, it’s clear they weren’t fans of what happened.

“I don’t know if it’s the best for a few reasons,” Joey Logano said. “One, it’s really, really risky — not only for the driver, but for the fans. There’s a lot of risks there. I don’t know if we should be willing to take that kind of risk.

“But it’s also the move you make in the video game when you can’t get around the corner fast enough. Isn’t it? Like so? And what’s it look like when there’s 10 of us doing the same thing at the same time? And it happens race after race after race. Well, eh. It’s not that cool any more, is it, when you say like that, right? So I think yeah, it was awesome and made top-10 plays as it should. Like all that was really neat. I just don’t think it’s the greatest thing.”