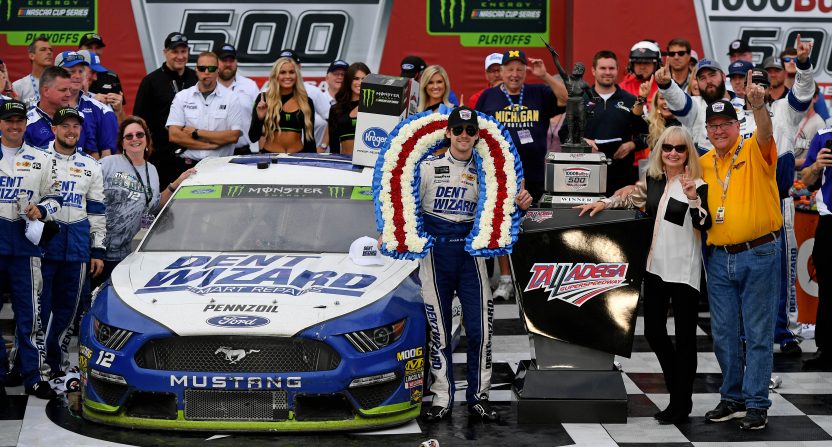 Superspeedway races can always be a crapshoot, but as long as you can somewhat avoid the inevitable crashes, the same people usually show up by the end to compete for the win. Ryan Blaney is one of those drivers. Before this past weekend, Blaney hadn’t won at Daytona or Talladega, but he was always a formidable force at those two tracks.

In just his second career Monster Energy NASCAR Cup Series race, Blaney led 15 laps at Talladega. In 2017, Blaney finished runner-up in the Daytona 500, and in the 2018 race, led a race-high 118 laps en route to a seventh place finish.

When Blaney showed up at Talladega, he knew he needed to win. After suffering suspension problems at Dover, Blaney was on the outside looking in within the NASCAR Playoffs. Sitting 22 points behind the top eight and already lacking Playoff points, Blaney needed to win or else he’d likely be eliminated in the Round of 12 for the second consecutive season. In a hard-fought battle which consisted of three major crashes that took out most of the field, Blaney escaped that plus a spin of his own on pit road and defeated Ryan Newman in a photo finish to pick up his third career win.

Blaney talked to The Comeback about his Talladega win, hanging out on the Boulevard in the infield, and his hopes for the rest of the season. We also chatted a little bit about Joker. The interview was edited for clarity.

Phillip Bupp: Now it seemed throughout the season, you had the car and the speed, but something would happen maybe in the late stages to keep you from winning. How big was it for you to, not only advance to the Round of 8, but get that first win of the year?

Ryan Blaney: Oh it was huge. Especially after our problems at Dover, it would come back like that and most likely having to win one of these races here at Talladega or Kansas. Huge to capitalize on that opportunity and be able to, move on and, and be good. So just big day for our team. It’s nice to finally have a day together that kind of works in our favor, which is good.

PB: How’s it like to have a week of no pressure racing ahead of you?

Blaney: [Laughter] Yeah, it’s nice. I mean, you still go out and try to win Kansas for sure, but it’s nice to not have to, bite your fingernails on if you’re going to make it or not.

PB: Now you’re a pretty good superspeedway racer. What’s your mindset when you go to Daytona and Talladega? Do you see them as times where you might get in trouble and lose points to your rivals, or an opportunity to gain points and, like last weekend, get a win?

Blaney: Both. [Laughter] You never really know what’s going to happen there. You can get caught up in a mess not of your doing. I felt like that was kind of three previous superspeedways this year for us have been in being caught up in other people’s mess. And just, it was nice to have a day where you can see the wrecks happen and be able to make a plan and avoid them. But yeah, I mean it’s a big point gainer or point loser, you just never really know what to expect. You just try to go there to think about surviving the whole day and every show, give yourself shot at it towards the end.

PB: And I figured, this past weekend it was probably for you, I mean like you said, you had pretty much a must-win. Really had nothing to lose. Just go out there and see what you can do.

Blaney: Yeah, pretty much. I mean we knew the spot we are in and, obviously going in we needed to win in the race no matter what. I mean that’s the case every weekend [winning the race], but knowing the spot we were in, knowing what we had to do and take care of. That kind of gave us a chance to be really aggressive, get really aggressive on the track, and make some bold calls and bold moves and it’s almost a good thing when you’re in a must-win situation. You don’t want to be in that position, but at the same time it’s good to just go out and not have to worry about points. Just really try to go win the race and make a statement.

PB: Now the talk about manufacturers teaming up and having plans to only work with each other was pretty prevalent. Did Ford have any prerace plans for you all? And did you experience any Chevy or Toyota drivers avoiding you during the race?

Blaney: I mean, speedway races, the more friends, the better. It’s a strength in numbers thing at those races, and what better people to work with you than your manufacturers. So I know a lot of people kind of coordinate and help. I didn’t really see what the big deal was, if Chevy wanted to work with Chevy and Ford wanted to work with Ford… At the end that race, when there’s all the cards on the table you work with whoever you can. You saw the 11 push the 6 up there to the front [on the final lap].

So it’s just, it’s just whoever you can find towards the end of those. Yeah, maybe throughout the day you try to line up with your manufacturers, or teammates to try to build runs and build lanes and get enough cars to make a lane move. And that’s just part of strategy. I mean you want to be with people who you think will stay with you. You don’t want to get hung out and you have more confidence in the people who drive on your team or Fords, in our situation, to stick with you and be able to follow you wherever you go.

PB: Now over the weekend you’ve spent some time in the Talladega infield. For people who have never experienced [the Talladega Boulevard], could you describe the atmosphere?

Blaney: Oh it’s great. I mean, I love going to Talladega. The new infield they had, number one, was really incredible. They did that fan experience really nice, and the new garages were amazing and a lot of tracks have been doing that here the last couple of years from Talladega to Phoenix to Richmond. Dover had a brand new infield. So it’s just increasing fan experience on that side of it. But then, Friday night during that big one on the Boulevard, all the fans were having a great time.

That’s, that’s a really good night for those, for those guys and drivers to go out and really get to hang out with all the race fans. And that’s something I try to do a lot of. Our sport isn’t possible without all those people supporting us along the way. So the atmosphere is always second to none at that place, and Talladega does a great job of really accommodating the fans and helping out.

Ole 12 team had a hell of a get together tonight. Cheers to ya. pic.twitter.com/PvtlGVwx3t

PB: Was your post win celebration on similar level?

Blaney: Similar, [laughter] yeah, it’s been a hectic week that’s for sure. It’s kind of messed everything up, racing on Monday, it kind of shortens your week. But we had a really good get-together [Wednesday night] at my house with all my team on the 12 and all their families coming out, all their kids, and it was just blast. A kind of low key thing, just a lot of fun. So just showing appreciation, you want to celebrate and appreciate what you guys have accomplished, but at the same time you need to be able to focus on next weekend. After [Wednesday] night we’re focused on Kansas and trying to go win that race and the races after that.

Yeah, it was definitely a fun time. Head hurts a little bit more than it should, but that’ll eventually fade away and we’ll be able to go racing here in a couple of days.

PB: Nice. Going off topic. Have you had a chance to see Joker yet?

Kind of a different perspective on that stuff.

PB: Yeah, and I’m sure you’re also looking forward to The Rise of Skywalker. I’m really excited to see how the trilogy ends.

Blaney: Yeah I am, those most recent couple movies they’ve come out with have been good, and it’s a new little story they’re tellin. But at the same time keeping right with where it all started. and I’m excited to see them wrap it up and, and kind of figure out where they go with it, how they tie together some characters. But I can’t wait for Christmas and for that to come out. It’s coming pretty quick.

PB: Now going back to the track, we’ll get you out of here on this. Looking forward, the Round of 8 has to be pretty big for you. Earlier this year, you finished fourth, third, and that 37th at Texas you were solidly in the top five and you led 45 laps. How’s the confidence in the hopes of you making it to the Championship 4?

Blaney: It’s high. I feel like the Round of 8, those three tracks, like you said, have been really good to us. From two great finishes at Martinsville and Phoenix, and we were leading at Texas when we blew up and had our problem. Those tracks have been great for us this year and for previous years. So it’s just about trying to capitalize on this big opportunity we’ve got and going to some places that, like you said, have been really good to us in the past, and trying to figure out how you can be just that little bit better at those places to try to win the race in advance.

It’d be great to, like Joey did last year win in Martinsville, then you have two solid weeks to focus on Homestead. You don’t have to worry about bonus points; it’s just a winner-take-all thing. So I feel really confident going into the Round of 8. Obviously morale is really high right now on our team to go out and go try to win Kansas, and then to try to win those other three races before you get to Homestead and lock yourself in. But, yeah a good round for us, just a matter of executing best we can.