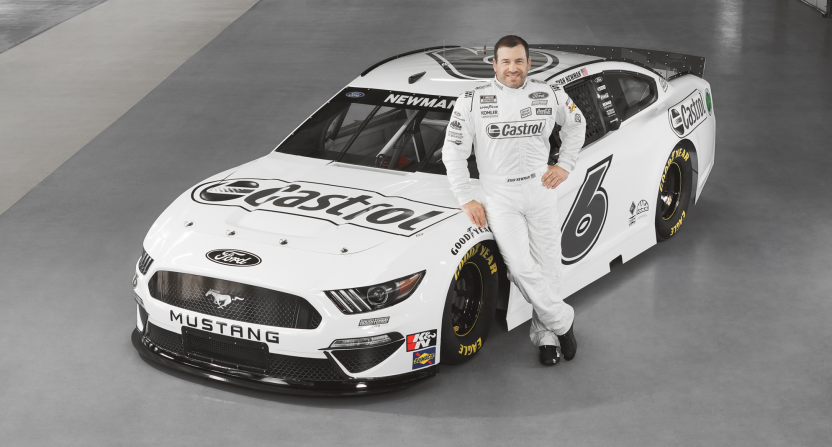 In 2020, Ryan Newman was about 1,000 feet from winning his second Daytona 500. But in the blink of an eye, a potential win turned into potential tragedy. Newman’s car sailed into the air and then got hit in the driver’s window by Corey LaJoie. The car came to rest upside down, and everyone feared the worst after seeing the destroyed remnants of Newman’s Ford.

Newman was knocked out and suffered a brain bruise, but none of his injuries were life-threatening. Just 48 hours later, Newman walked out of the hospital under his own power, holding the hand of both his daughters. Newman came back to competition when the NASCAR season resumed in May due to the COVID-19 pandemic.

Twelve months later, Ryan Newman is back in the news, but under much better circumstances. Last week, it was announced that Roush Fenway Racing (co-owned by Red Sox and Liverpool owner John Henry) became the first carbon-neutral NASCAR team, verified by independent third party company ERM CVS. To celebrate the achievement, Newman raced an all-white car with gray Castrol logos in this past weekend’s Daytona Road Course race. Newman finished 20th on the road course.

Newman talked to The Comeback about his Daytona 500 crash, his team becoming carbon-neutral, and the upcoming Homestead race. You can check out the action as the NASCAR Cup Series makes its annual stop at Homestead-Miami Speedway with the Dixie Vodka 400, Sunday at 3:30 p.m. ET on Fox.

Phillip Bupp: How has the season been for you so far?

Ryan Newman: I mean, 14 laps in the Daytona 500 we got crashed, so that was an obvious answer. The road course was a substandard by what we did last year, and the Clash, for that matter. So we struggled a little bit there, but that’s not going to define the first quarter of our season by any means. So really would like to have a second shot at answering your question after Homestead this coming weekend.

PB: Well, it’s interesting to get that perspective from you because like you say, first 14 laps of Daytona, that was out of your hands. And the road course could have been a bit better, but… it might not be the position you want to be in right now, but you’re kind of seeing a little bit of a setback that you hope to overcome.

Newman: Well, no doubt. I mean, that’s just points that we’ve lost. That doesn’t mean that other guys aren’t going to lose points and we can gain them back. And the reality is we’ve lost an opportunity of locking ourself into the Playoffs, which really doesn’t mean anything if you can’t perform in the Playoffs. So the struggles that we’ve had are realistic, and the ability to overcome those are realistic as well.

PB: I wanted to talk about your crash at Daytona last year. I know you don’t remember what happened that day. I don’t know how you feel about seeing the crash on video, but have you seen the video of the crash?

Newman: Oh yeah. I’ve seen it from every angle.

PB: How soon after did you see it for the first time?

Newman: When I was in the hospital, I guess that was the first time that I saw it. I don’t necessarily remember that. I mean, I was on medication, they had me knocked out to let me come back to. And then really not until I had a heart to heart with my dad, who showed me the video. And he gave me that, “Listen son, this is why you’re in here.” And I was like, “Oh. Yeah, That explains it.” Because realistically, I never even had a headache. It’s as crazy as you could ever imagine. I don’t remember ever even having any kind of headache at all. But if you saw my helmet and you saw my car, you’d think that I would be lucky to even have a head on top of my shoulders.

Newman: No, yeah. I mean, I’ve had that for years. Back in 2003 when I had my Daytona crash they used that in highlights, my lowlight for years, and still do. So it’s not the first for me. It’s just my first real near-death experience. And I guess at some point you’re going to go through that, whether you live through it or not.

PB: For sure. Do you think about that crash while you’re driving? Do you feel it changed your driving style?

Newman: Not at all. Because I don’t have any recollection of it.

Newman: I compare it to, and it’s not a good comparison because I’ve never had this experience, but I compare it to somebody who’s had experience in a car accident before. Whether it’s getting rear-ended, somebody crossing the center line on you and you live through it. Right? But if you remember that accident, it changes your life forever. If you don’t remember that accident, you just know that it happened, but it doesn’t affect you. And what happened to me doesn’t affect me because of that, because it was deleted.

PB: Well going along those lines, after the fact, now looking back, has it helped reshape your perspective of life, maybe off the track?

Newman: Oh, I think no doubt. I mean, if a near-death experience doesn’t bring you closer to God and the people around you then you’re not living. And I feel like I definitely have, I’ve been blessed by a lot of people, had a lot of prayers that got answered and more respectful in a lot of capacities. No doubt.

Proud to announce that Roush Fenway Racing is the first carbon neutral NASCAR team, working with our friends at @CastrolUSA and led by our fearless driver @RyanJNewman #drivingforchange

PB: Now something Roush Fenway Racing has done recently is you’ve become the first carbon-neutral NASCAR team. How important is it to have that distinction, and how crucial was Castrol’s involvement to get the team to this point?

Newman: Oh, it’s very important. I mean, from a global standpoint, from a sponsor standpoint, even if you tie it into our relationship with Ford, and everybody at Roush Performance. I mean, this is important. This is a step towards everyone’s future. You know, I think it’s also a step that we knew about and should have and could have done, and I applaud Castrol for leading us, to guide us in this direction to make us a more efficient and environmentally responsible team. And being carbon-neutral is a big part of it, but it’s not the only part of it. So there’s several different levels and layers of being human and responsible to our environment here.

PB: The takeaway I got is, and it’s something that… it can be easy to see, like when you say “carbon-neutral,” that a lot of people would naturally think of just the [race] car. But there are so many other things that can be done within a NASCAR team that what you’re racing on the track, yeah, that can be… but there are plenty of things outside of that which you can do.

Newman: For sure. For sure. Yeah. It’s not just what comes out the exhaust of the Castrol Ford or the Oscar Mayer Ford or anything else for that matter. There’s several different aspects of it, from the power within the shop, being efficient there… it’s simple things like changing your light bulbs to more efficient light bulbs with even brighter capacities and lumen capabilities. So lots of different perspectives outside of, again, the burning of fuel and the responsibility that we have with recycling things like oil and different fluids.

Check out the @CastrolUSA Carbon Neutral car getting wrapped for the @DAYTONA Road Course!#DrivingForChange | #NASCAR pic.twitter.com/kM2zJPN54B

PB: Now, speaking of the cars, do you foresee a future where stock cars have some sort of alternative energy? And is that something you’d like to see NASCAR work toward?

Newman: Well, that’s something that I think is going to be a part of everyday life in the future. The kicker for me is I’m a traditionalist. And I like the sound, and that’s going to be the challenge, I think, that everybody has, is to incorporate that sound and that feel and that sense, right? I mean, we go to sporting events and we watch… let’s just say we watch basketball or football or whatever, but they still got the marching band in the background. They still play music. They still sound out sirens when you score a goal, right? The sound is a big part of it.

And that’s a big part of what’s special about stock car racing, to me, is the cars pushing the air, and the exhaust sound, and the speed, and the tire squeal, and all that stuff. Now granted, the tire squeal won’t change, but the engine sound, that rumble, that V8 rumble is special. It always will be special. And that’s something I think that’s going to be a challenge in the future, no matter what the next-gen car or any kind of vehicle in the real world is about.

PB: Yeah. I went to the Formula E (all electric racing) race one year in New York City, and that was a different experience, not being able to hear the engines.

Newman: Yeah. I mean, it’s just, it changes it. No doubt.

PB: Now, looking ahead, we’ve got Homestead coming up. Last year’s race didn’t really end well, but you’ve had some good runs to track. What’s the mindset entering the weekend and what are your expectations?

Newman: Oh, just to hopefully show and prove that our mile and a half program has gotten better. You know, we struggled a little bit with that last year. It felt like we had some promising races, but then the next one just didn’t happen the way we wanted it to. And really that… this is, to me, this is what used to be Fontana. This is the first race of the season that makes up the spinal cord and the backbone of what makes our season. Granted, there are road course races and superspeedway race in the Playoffs, but you’re going to win a championship in Phoenix. You’re not going to win a championship on a road course. You can put yourself in the Playoffs, but you’re not going to win that championship there. And that’s why these next few races, when we get to  Homestead, Atlanta, Phoenix, Bristol, Martinsville, places like that, those are the important ones, because those are in the last 10.

PB: For the rest of the season, is it safe to assume making the Playoffs is the goal?

Newman: Winning the championship’s the goal. Got to make the Playoffs to do that.