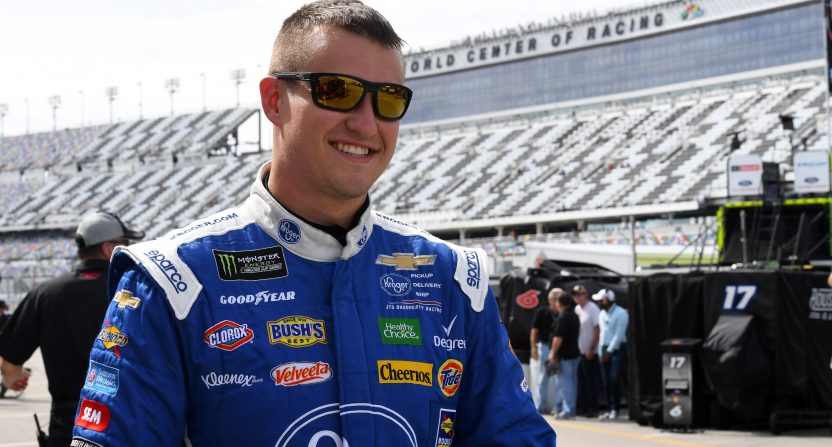 In an industry where more and more opportunities are being given more based on money than talent, Ryan Preece is trying to buck that trend. That doesn’t mean Preece hasn’t had to bring in some money on occasion to keep his career going. But now that he has his foot in the door, Preece is trying to slam that door open and let his talent do the talking for him in his rookie season in the Monster Energy NASCAR Cup Series.

Preece made a name for himself in the Northeast in the Whelen Modified Tour. A rather overlooked market for NASCAR talent, the modified division has been the place where such modified mainstays like Ray Hendrick, and NASCAR Hall of Famers Jerry Cook and Richie Evans dominated the landscape in their respective eras. Among those who went from modified to Cup, Jimmy Spencer, Geoff Bodine, and Steve Park all won races in the Cup Series.

Preece won the modified championship in 2013 and finished runner-up in four other modified seasons. The Connecticut native is a very popular figure in the Northeast among the very dedicated modified fans in the region. Preece hasn’t forgotten those who believed in him when he was younger and, in a way, maybe brought that modified fanbase back to Cup now that they can watch one of their own take on the best in NASCAR.

Preece told The Comeback, “I think there’s a big following in the Northeast, or well anywhere from North of West Virginia on up, whether it’s all of New York, Maine, Vermont, New Hampshire, all of that. And NASCAR really doesn’t go up in the Northeast other than New Hampshire and Watkins Glen, and kind of [Dover], if you wanna call this the Northeast, but … So as far as that, it’s been really good. A lot of support from them, especially from the modified, there’s a lot of people that love modifieds up in the Northeast. So it’s been really good, and it’s kind of brought a fan base back to NASCAR, I guess the ones that didn’t really watch. They stopped watching when Steve Park left.” [Park stopped racing in Cup full-time in 2003]

While racing modifieds, Preece tried his hand in racing the Xfinity Series. Preece did the best he could but wasn’t getting anywhere driving for underfunded teams. Facing a crossroads, Preece borrowed some money from a friend and paid his way into a couple races with Joe Gibbs Racing and a chance in top equipment. In what would be two of the most crucial races of Preece’s future, he finished second and first at New Hampshire and Iowa respectively.

Despite taking the risk of investing so much and betting on himself to succeed in those two races, Preece didn’t really let the pressure get to him, and in fact, still doesn’t to this day. A story that sounds sexier to those of us on the outside looking in, Preece kept things simple and just saw it as another chance to go and win.

As a result, Preece ran a partial schedule with Gibbs in 2018, culminating in a win at Bristol and paying back his loan with his $100k Dash 4 Cash bonus. Showing everybody he has what it takes to compete on the national stage, Preece made the big step into the Cup Series. Driving the #47 Kroger Chevrolet for JTG Daugherty Racing, Preece is spending every week learning and improving as he progresses in his rookie season.

This season has seen some growing pains, but there have been some bright spots. In his first race in the #47, Preece dodged multiple crashes late in the Daytona 500 and finished eighth. When you’re trying to avoid a crash like that, it comes to a bunch of driver skill, great communication with your spotter, and a whole bunch of luck.

Preece capitalized on his Daytona finish by finishing third at Talladega, showing everybody that he can be a contender in superspeedway races. Unfortunately, that doesn’t translate to other tracks and that’s why Preece is 24th in points. Despite some of the difficulties of being a rookie or the Chevy not being as successful as Ford and Toyota this season, Preece certainly has the skill and that hasn’t stopped JTG and Preece from giving up.

“You just have to keep working,” Preece said. “You all have to keep working together to accomplish a goal. At the end of the day, sitting there and looking or saying that this or saying that isn’t gonna get you to that end goal. I think really, it’s just coming down to finding the right balance and getting it to where we need it to be and start racing and keep moving forward. Kind of how we were at Atlanta.”

On if he’s seen improvement in these first 12 races, Preece said, “Yeah, absolutely. I think we just got to keep improving on everything that we’ve been working on, and we’ll get there. I mean, if we can just keep working on that speed, and get ourselves in position to race with these guys, we’ll be all right.”

Ryan Preece is someone who knows how to race. Even though he now lives in North Carolina, he clearly hasn’t forgotten his New England and modified roots. Those things are right there with Preece and that will help drive him throughout his NASCAR career. Preece certainly has the skill and the right mindset to be a top driver in the Monster Energy NASCAR Cup Series. While it may be enticing (or necessary) for an owner to sign somebody who’s bringing in a bunch of sponsorship money, it’s important to never overlook someone like Ryan Preece, who’s determined to be the best and is willing to bet on himself to get there.