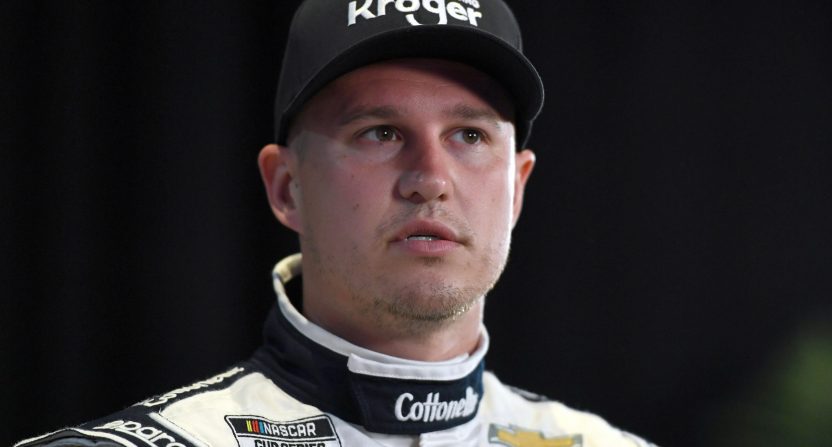 This Sunday, the NASCAR Cup Series will resume their 2020 season. NASCAR has been on hiatus since March 8 due to the COVID-19 pandemic. The sports world has had to adjust without live sporting events, and NASCAR has had their drivers race virtually in the eNASCAR Pro Invitational Series.

Now, with more precautions, NASCAR will begin racing at Darlington. Without fans in attendance, NASCAR revealed how teams will have to adhere to social distancing protocols and recommendations, and have included fines and possible ejections for crew members who fail to adhere to follow orders such as wearing masks or staying within their car throughout their time at the track. Despite taking these precautions, it’s debatable if even that can be enough due to a lack of available tests, but there will be racing.

Ryan Preece didn’t have a great start to his 2020 season. If you look at the current points standings, Preece is 33rd after four races. That looks bad, but it hasn’t been, because the team was terrible. Preece was competing for the win at the Daytona 500 before crashing out with two laps to go. Some genius pit strategy had both JTG-Daugherty Racing cars first and second with less than 50 to go, but an engine issue cost Preece a potential first win. A points penalty gave Preece negative points at Auto Club and in their final race before the hiatus, Preece scored his season best finish of 18th at Phoenix. As the teams come back, Preece will be looking to turn things around and climb up the standings.

Ryan talked with The Comeback about the NASCAR Cup Series starting back up, his team adjusting to social distancing rules and the changes to the season, as well as his participation in the eNASCAR Pro Invitational Series.

Phillip Bupp: How much are you looking forward to getting back on the track?

Ryan Preece: Well, to be honest with you, this is the first Monday, we woke up in what, six or seven weeks to have something to look forward to. I’m doing really good and I really cannot wait to get to Darlington Sunday and kind of jump at everything, getting everything going again.

PB: How have you and JTG-Daugherty adjusted as a team in order to work during the pandemic?

Preece: I know us and the drivers, we kind of have to isolate ourselves from everything. So it’s weird not going to the race shop and doing that whole stuff. At the same time, it’s necessary precaution for everything that’s going on right now. Following along with the updates, we have a little group app that we’ve all been following along on and kind of getting those updates. I feel really good about everything that they’re doing, and I feel good about getting back to the track.

PB: In May, there will be midweek races, and no practice and qualifying to start. How does that affect your team in your current situation?

Preece: I feel good about it. I feel like there’s been plenty of times, even though teams haven’t been able to go to the race shop, a lot of stuff is done through simulation, which is a tool that a lot of teams have now to, kind of, perfect your setup. We’ve had plenty of time to work on that I would say, and, and I feel good about it. The last I talked to my crew chief was yesterday, and he felt really good about everything that we have in place for the next few weeks to get through Darlington and Charlotte. And I feel confident that we should be, we should be solid and, you know, kind of turn this year around for us.

PB: Do you think a lack of on track practice will help close the gap among the entire field, or will that spread them apart?

Preece: You know, I think it’s going to tighten it up to a certain extent. I think it just depends on how well the simulation’s done through for when you show up. I think it’s going to create a lot of comers and goers just because there’s no qualifying. You’re going to see some guys fall back to the beginning until they get into the car closer, and I think there’s going to be a lot more adjustability built in your setup. I’m excited to see kind of how it all plays out for the first racetrack to be going to Darlington, that’s a tough one. I’m excited for it and I hope everybody tunes into Fox at 3:30 (ET) on Sunday.

PB: What about fitness? I don’t know your fitness regimen per se, but going from a couple of months, being at home and practicing social distancing to now racing twice a week, needing to fit a bunch of races in that time. Will this packed schedule help those who have been able to keep themselves fit during this time?

Preece: I kind of just do my karting. My big thing is racing fitness, which is, it’s kind of different from everything else. I have this, what we call a Rotax Kart, and I’ll go run laps in that thing or run it around wherever I can to keep yourself in what I call “race shape.” I’ve been still doing it kind of weekly, once or twice a week. I think I’m going to be just fine, but as far as fitness goes, I think a lot of people have kind of been doing their own thing. I do notice a lot more people running when I’m driving down my street or whatever it may be; I see a lot more people being active outside rather than going to the gym or wherever they usually go. It’s nice seeing all the people doing some yard work and outside, and instead of… It’s almost made me kind of have to push pause on everything.

PB: You were involved in iRacing during the hiatus, and you were one of the better racers in the [Pro Invitational] Series. How long have you been doing iRacing, and what did you need to do to really get a handle of it?

Preece: Oh, so iRacing was something that I did when I was back in high school, or kind of came out right towards the end of my high school career. It was something like, I just did a little bit. I didn’t really do a ton of it. Then obviously I got older, and my racing career, obviously it just got a lot busier than to where I wasn’t able to do it more and I hadn’t done it in quite a few years. When I first got on, when everything happened, I was a little off, ’cause it’s not easy, but it was a lot of fun and put a lot of time and practice into it and obviously we almost won a couple of them, but we had some success so that was good.

PB: What are some similarities and differences in your driving style when it comes to iRacing and the real thing? What can and what were you able to do in both, and what can you only do within one or the other?

Preece: Well iRacing, there’s some things that are different. The aero effects aren’t nearly as dramatic as what they are in real life. That’s something that you can’t really take away, but at the same time, the tracks are a hundred percent true. They are real, everything about them. Every bump, every scene it’s a hundred percent accurate. There are a lot of things we can take away, but there are some things obviously that are different. It was a lot of fun in the end, and I feel like I’m going to continue to use this as a tool to prepare, especially since we don’t get any practice and your first time going into Turn 1 is going to be Lap 1. So it’s going to be extremely important to be as prepared as possible.

PB: Given the viewership of iRacing broadcast and overall interest, would you want to see the Pro Invitational Series resurrected in some form either mid-week during the summer when you know, there’s not much sports content even before the pandemic or maybe during the offseason in the winter?

Preece: I think there’s some things that would have to be worked out. I just think there’s a lot of preparation that goes in that, doing something like that might consume a lot of time to be prepared for the main task, but at the same time, you know, I think an hour or two, once a week before the track you go to, isn’t going to hurt ya.

PB: Going back to the real thing, you had a rough start to the season. You had some bad luck. Crashed at Daytona. The engine problem when you were doing well at Vegas and in the penalty at Auto Club. You’re 33rd in points, but you still got 22 more races until the playoffs. What’s your mindset as the season’s effectively reset, going forward?

Preece: We’ve hit reset on 2020 that’s for sure. I think it’s just a great opportunity to be able to sit down and talk with my crew chief, my engineers, and everybody at JTG-Daugherty… and turn everything around, build some momentum, and kind of get back to where I felt like we could have been. We could be talking about this season being totally different with two things changing. You know what I mean? It could have been a heck of a year so far. It’s just unfortunate circumstances. Wrecking with two to go at Daytona. Running I think it was second at the time or, or third, and then Vegas having the motor expire running second or whatever it was too with some pit strategy, a great pit strategy call. It’s just unfortunate, but at the same time, I’m confident with JTG-Daugherty and everybody there with the equipment they give us. Chevy and Hendrick power, they’ve been giving us great motors. It’s just that when you push the limits, that’s what happens sometimes. So this is an opportunity for us to turn it around and get the season going.

PB: Given the season’s transformed and it’s now fluid as it is, are you in a situation where the team is more willing to take risks and go off-strategy because nobody really knows what’s going to happen, try to get a win, or are you still in a position where you can stick with the status quo and move up the standings?

Preece: I think you just have to take every race different. It’s a race-by-race thing and if there’s an opportunity for us to be aggressive, whether it’s on the track or on pit strategy and we need to take that, we’ll do that. It’s just going to be a race-by-race thing.