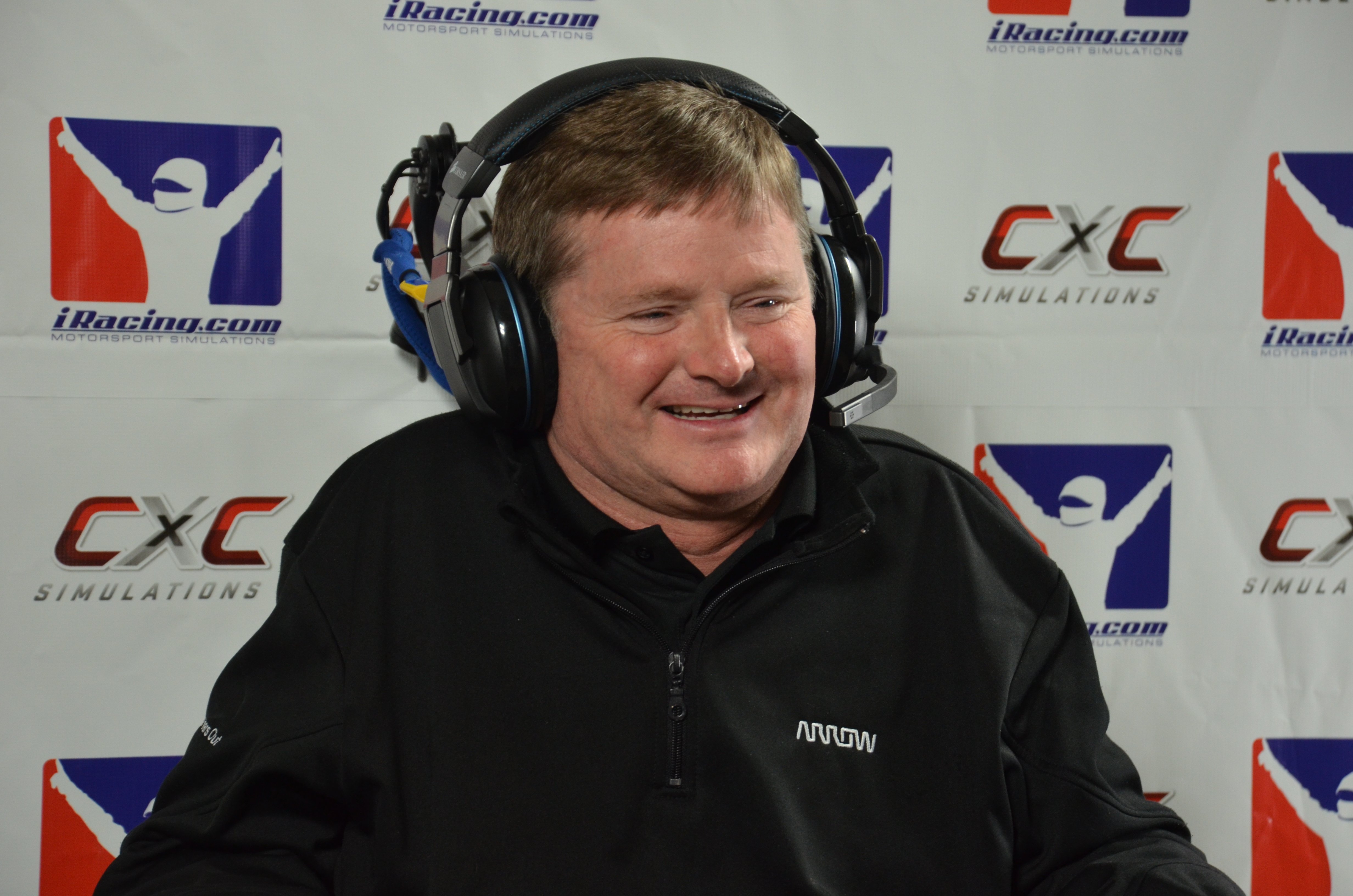 One thing is for sure. Sam Schmidt still sounds like a racecar driver.

“I was pleased that I had really decent race pace,” said Schmidt, reflecting on his run, “I’ve got a lot of things I think I can change and improve for next year.”

The race, that he’s referring to, was this year’s iRacing Pro Race of Champions, an online event that brought together some of the world’s best drivers, across a variety of series, for a simulated race around a virtual Watkins Glen International Raceway. For most of the field, which included NHRA veteran Ron Capps, sports car driver Alex Gurney and 2012 NASCAR Sprint Cup Champion Brad Keselowski, it was an opportunity to have some fun by testing themselves against their cross-discipline peers. (Not to mention a chance to push the limits without having to worry about tearing up real sheet metal.) But for Schmidt, being back in the field, virtual or not, meant a good deal more.

“I’m always up for a race, I’m a very competitive guy. And, you know, first time in 15 years to be able to race in any format has been super cool.”

Fifteen years ago appeared, at one time, to be the end of Sam Schmidt’s driving career. Just months after registering his first career victory in the Indy Racing League, Schmidt crashed in an offseason testing session, suffering serious injuries, including a severed spine. The accident left Schmidt a quadriplegic, but to use the parlance of the track, it certainly did nothing to slow him down.

In 2001, he founded Sam Schmidt Motorsports, (now Schmidt Peterson), which has fielded entries in the IndyCar and Indy Lights series for more than a decade. In fact, the team has won seven Indy Lights championships, and in 2011, captured the Indy 500 pole behind driver Alex Tagliani. Schmidt’s time in charge of a race team has been successful, and gratifying, and, to hear him tell it, more than a little nerve-wracking.

“For 15 years I’ve been a team owner, and I have to find the drivers, and the team members, and the sponsorship and the resources to support it. And it’s really stressful and really frustrating. So on this side of the fence, with the SAM project,” which, as Schmidt cheerfully points out, stands for semi-autonomous racing, and not for his own name, “it’s just been a great release and a pleasure.”

That pleasure, that latest step in Schmidt’s racing career, came as a result of a collaboration between Arrow, a Denver-based electronics company that sponsors Schmidt Peterson Motorsports, and CXC, which develops and builds racing simulators. For a mere $54,000 or so, you too can own one of their “Motion-Pro II” rigs, and the ability to try out high performance cars at some of the world’s most famous tracks. (Hey, nobody said that virtual thrills come cheap.) But then, how can you put a price on giving a racing lifer like Schmidt the opportunity to return to competition?

“You just saw the racer come right back again,” said Chris Considine, founder and CEO of CXC, and himself a former racecar driver, “That stubborn determination. I mean, I’m sure his guys had to remind him that he had to eat lunch, dinner, you know, things like that, to pull him away from the thing. He was just glued to it, you know. And in the end he was fast, and he was really racing with people.”

To ask the question that’s probably occurred to curious readers by this point: How exactly does it work?

Schmidt’s control over the car comes via cameras, which track his head movements by way of markers on his hat, as well as a tube in his mouth that senses pressure, and is used for throttle and braking. It’s a system that Schmidt has used previously to return to the track in a custom Corvette, as featured in an ESPN “Sport Science” segment. But it was one of Schmidt’s own drivers who first sparked the idea of a return to racing.

“This was actually, the idea of Townsend Bell,” explained Considine, “He is one of our development drivers at CXC. And he was driving Sam’s Arrow simulator here, after we had built it for them. And he suggested that it might be a great idea if Sam raced in the race of champions.”

“I was hoping that everybody would be required to use the same head controls and system that I was, just to even the field,” noted Schmidt, “That was not the case, but it was still a heck of a lot of fun… It’s a great format for somebody in my situation to be able to compete against anybody.”

“I think everybody secretly was a little worried,” offered Considine, when asked about the initial expectations, “But I have to say, watching him work… I wish we had video, the way they worked… they looked just like a racing team. The driver was giving them all the information they needed, and they were dialing this thing in. And they worked for hours and hours and hours doing this. And you could just see the lap times start to drop.”

Schmidt ended up coming home 16th in the race, held late last week, after getting caught up in an early wreck that, it’s worth mentioning, he himself did not trigger. But in a field of 25, simply running respectable times, and hanging in with the rest of his peers, was undeniably impressive.

Or, to put it in Schmidt’s own words following the race, “There’s still about eight guys that got beat by a guy with no hands and no legs.” I guess the trash talk never really leaves the system either.

“Yeah he’s such a racer right?” added Considine, “He told us, ‘oh yeah 16th that’s great. But I’m kind of disappointed that it wasn’t a top-10.’ And I’m thinking to myself, if it was a top-10, you’d be telling me you’re disappointed it wasn’t a top-5 or top-3, or you didn’t come home with the win. It’s never enough for racers, you know? And that’s great! That spark never goes away. And to see him switch immediately back into that mode was really cool to watch.”

Schmidt realizes, of course, that the impact of his participation was far more important than his finishing position. “We had a lot of people watching, a lot of comments, a lot of people just sort of inspired by the process. And hopefully this will drive people to get out of bed…their disability should not limit them in this type of life, or work life, or daily life. Unless they’re on a ventilator they’re not any worse off than me, and they’ve just got to get on with it, and find out what gets them up every morning, what floats their boat, and get back to doing it. Hopefully this will inspire some people to do that as well.”

“Yeah I mean it’s a pretty amazing experience to watch anything you create get used liked that and inspire people like that,” said Considine, praising the work of his own crew, “It’s kinda humbling, you know, but I have to say, it’s really a team effort. To watch all of our guys emotionally connect with something they created, is really cool. When they come in after hours and watch the fruits of their labor, you can just see it click for them. And it’s really them, it’s those guys that built it.”

So what’s next for the SAM project? Schmidt says that the Arrow team continues to work to improve his level of control of the car even further, and that more potential exhibitions, and speed tests, could be on the horizon. In fact, the group has thrown out the idea of Schmidt attempting to obtain his driver’s license again, at some point in the future. Oh, and then, the 2016 edition of the Pro Race of Champions is now less than a year away, and it didn’t take too long for Schmidt to start looking ahead. There’s still ground to be gained, after all.

“I think I recognized some things towards the end of qualifying which could help me considerably with just qualifying speed next year,” said Schmidt, “You’re always trying to turn over every rock and improve as much as you can, whether it be in yourself or the equipment, and I think we can improve both for next year.”

Once a racer, always a racer.