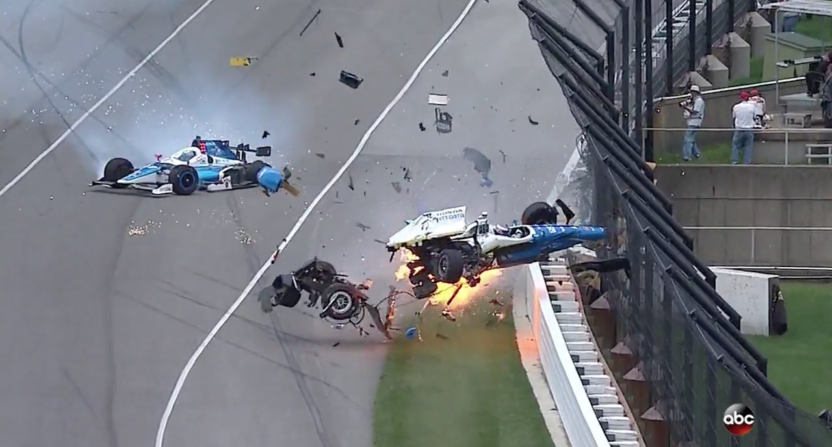 I have been a racing fan all my life. I have seen some horrific crashes that have resulted in serious injury and have been fatal. I’m not being hyperbolic, I have never seen a crash like this and everyone involved on the track and in the stands being able to not only survive but walk away.

This crash started when Jay Howard, who had been laps down after running out of fuel in his first stop, moved up on the track so the lead lap cars could pass him. The margin of error in being in the racing groove and in the “marbles” (where you don’t want to be) is very slim and Howard got into those “marbles.”

When you get that high, you cannot turn so Howard went into the wall. While on three wheels, Howard couldn’t turn and was just a passenger. Unfortunately, pole-sitter Scott Dixon had nowhere to go and all hell broke loose.

When I saw the aftermath live and saw Dixon’s engine on one end of the track and what was left of his car on the other, I knew it was a serious crash. I was not expecting what I saw on the replay.

This is one of those crashes that just defies logic and thankfully that’s the case. Indy Cars are some of the safest cars in racing but they are still vulnerable. The car can withstand front, rear and side impact but the driver’s compartment is open and a head first impact from the top of the car is still possible and can be fatal. Dan Wheldon flipped into the catch fence with the top of the car first and that was how he was killed in 2011.

That very easily could’ve happened to Scott Dixon. Not to mention Dixon’s car could’ve landed on top of Helio Castroneves, who as he tried to avoid the debris on the track, went low and went underneath the flying Dixon.

Dixon’s car ripped the catch fence on the inside of turn two and the race had to be red flagged for about 20 minutes with Fernando Alonso in the lead. A photographer on the other end of the fence was stretchered away but seeing him on the ABC broadcast, it seems like he will be okay as well.

Dixon got out of the infield care center and you wouldn’t have though he was in an incredibly serious crash. This wrapped up a rough week where Dixon was robbed and held at gunpoint at a Taco Bell drive-thru.

So yeah, to those who say they can be a race car driver because they drive 70 mph on the highway and think that’s the same thing as 220 mph. Wanna say that now?