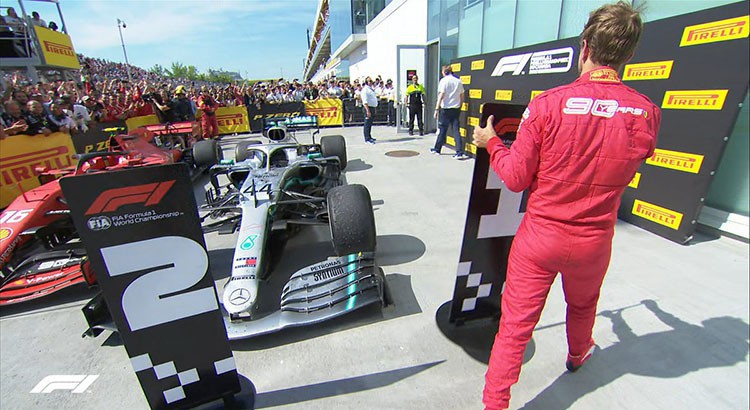 Formula 1 loves to shoot themselves in the foot and they have done it again at the Canadian Grand Prix. For reasons unthinkable to rational minded people, the person who crossed the line first actually finished second.

Ferrari’s Sebastian Vettel had been leading for the majority of the race when he went wide on lap 48 of the 70 lap race. As he was trying to corral his car from the grass surface, Mercedes driver Lewis Hamilton pounced but was blocked by Vettel in his attempt to get back on the track.

The stewards chose to penalize Vettel five seconds which was added to his race time at the end. There is a rule about needing a safe entry when going off-track but Vettel’s point was that he was forced to go into the racing line because he had grass on the tires and because of the narrow circuit, had no choice but to take the racing line to safely control his car.

Because of the penalty, stewards took away the remote possibility of an exciting Ferrari vs Mercedes battle for the win, on a track that is supposed to be one of the more exciting circuits of the F1 calendar.

Hamilton only needed to be within five seconds of Vettel and he did that, clinching his 78th win and his fifth win in seven races in 2019.

In a 2019 season marred by a lack of passing and a lack of motivation that a late race battle for the win actually happens because the winner can only be within one of two teams (maybe Red Bull if conditions are perfect) and the winner usually wins by seconds. So in a rare instance where we actually get a chance at an exciting finish, Formula 1 decided to crap all over it by overreaching and over-regulating their sport.

Vettel stopped his car at the beginning of the pit lane and wasn’t planning to attend the podium ceremony. After apparently being alerted he would be further penalized if he didn’t, Vettel showed up to overwhelming cheers and switched the position boards to give Hamilton’s car second.

Lewis Hamilton was put in a very awkward position after the race. Of course he won and was the beneficiary of the call but he didn’t make the decision and he didn’t want to win that way either but the fans booed Hamilton, as well as the stewards, for the finish.

It got so bad that even though he didn’t want to be on the podium, Vettel said in his interview that fans shouldn’t boo Hamilton. He’s right, people should be booing Formula 1 instead.

Formula 1 may be well within their right to penalize Vettel and they can preach safety until the cows come home but F1 constantly over-regulates their sport that they hurt the sport more than help and fans suffer as a result.

In this instance, Formula 1 took away the possibility that this could possibly be a “racing incident.” When something happens, it’s always gotta be somebody’s fault to the point where we’re afraid to actually race because any tap of the car goes to the stewards for a penalty.

This is why Americans hate F1. Sure, no one is expecting, or want, NASCAR level banging and bumping but Americans and everyone else around the world value hard racing. Take that away like the stewards did today, why are we even watching? This isn’t on the level of the 2005 United States Grand Prix but I can be sure that Formula 1 probably lost some new fans who tried the sport after watching Dare to Survive on Netflix.

That’s what’s unfortunate about Formula 1. Liberty Media can dress it up all they want with great, fast cutting documentaries and landscapes of beautiful locations and celebrities, but once they see the racing, they see what Formula 1 really is. A bitter political organization masked as a racing series who does more to make their fans hate what they want to love.