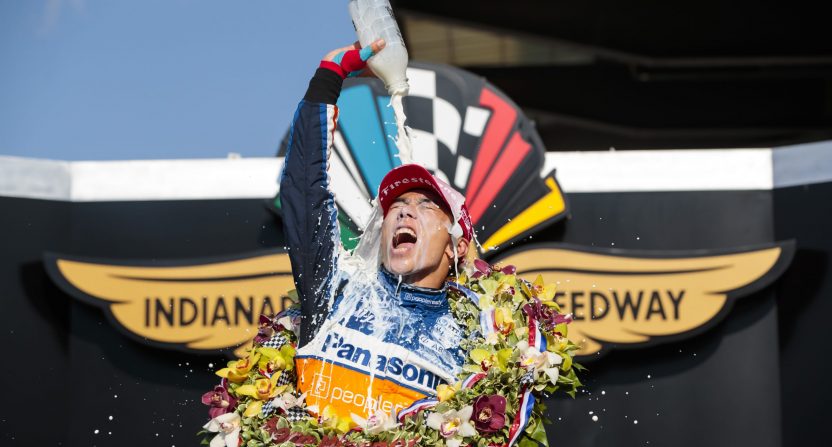 A late crash where Spencer Pigot crashed into the end of the pit wall resulted in Takuma Sato becoming a two-time Indianapolis 500 winner. The 2017 winner, Sato passed the dominant Scott Dixon right before the caution came out with 5 to go and snuck by with the win.

The start was rather eventful. Zach Veech pinched Ed Carpenter into the wall in Turn 1 of Lap 1. And then a few laps later, James Davison had a brake rotor explode on his right front tire, causing big flames to come out of the car.

A bizarre end to James Davison's chances of an #Indy500 win.

Dixon dominated, especially in the first half of the race, and the only one to keep up with him on race pace in the first half was Rossi. Rossi suffered a setback when he missed pit road and wound up being separated from Dixon.

That'll be big time lost, but he's got plenty of laps to make up the deficit, #Indy500 on @NBC: https://t.co/THKlb49aWT pic.twitter.com/HyI4tj54Nt

On a restart just before halfway, Conor Daly tried to cut it tight and got it too tight, catching himself on the cement strip inside the turn and spinning. Through all the smoke, Oliver Askew tried to miss the spinning Daly and took on a nasty hit on the inside wall. Askew admitted he was shaken up, which is completely understandable, but was okay.

A massive crash for Oliver Askew in the #Indy500.@IMS added SAFER Barriers designed for safety, and we're so glad they exist as he and Conor Daly are OK. Watch the race on @NBC: https://t.co/B6M3MXYpFe pic.twitter.com/2T6m3Y8ZYL

Alex Palou was having a strong run but his Indy 500 run ended on Lap 122 to effectively hand the Indy Rookie of the Year title to Pato O’Ward.

Spaniard @AlexPalou has dreamed of racing in the #Indy500 for years.

A crash ended the rookie's day just past the halfway mark. Coverage continues on @NBC. pic.twitter.com/3FWcbTS5eS

Rossi was Dixon’s biggest competition but on the ensuing pit stop, Rossi was black flagged for an unsafe release when he almost hit Sato and was sent to the back of the pack. Rossi tried to march through the field but he got loose coming out of Turn 2 and went straight into the wall.

PENALTY for an unsafe release for @AlexanderRossi!

Last year's #Indy500 runner-up will try to charge through the field NOW on @NBC: https://t.co/THKlb49aWT pic.twitter.com/ha8dhLe1Bl

Trying to race his way back to the front, he crashes out of the #Indy500 on @NBC: https://t.co/THKlb49aWT pic.twitter.com/MvINVIPrkO

With Rossi out, Sato got up to Dixon to take the lead late. He and Dixon were 1-2 heading into the final laps which came to a halt when Pigot crahed. The crash was rather innocent but when he hit the attenuator at the end of pit road, it resulted in an ugly crash that left a mess. Pigot was shaken up and was taken to Methodist Hospital in Indianapolis but he was awake and alert.

In what will be a controversial decision, IndyCar officials didn’t throw a red flag to try and have a green flag finish. The decision to not red flag the race ensured Sato his second ‘500 win. A former Formula 1 racer who finished on the podium at Indianapolis, Sato became the 20th multi-time winner. Sato became the first Japanese racer to win the Indy 500 and he is now the first Japanese racer to have multiple wins at the Brickyard.

"WE WON IT!"@TakumaSatoRacer is a two-time #Indy500 winner! @IndyCarOnNBC pic.twitter.com/jMA4CrBU1Y

.@TakumaSatoRacer is a two-time #Indy500 winner, and he's loving that milk! pic.twitter.com/Cb7QI71kj5

For Dixon, this has to be a letdown for him. He was solidly up front in every practice and qualifying session. He was up front the entire race and then he fell back to 2nd and finished there. Dixon is dominating the IndyCar Series and will likely win the championship, but for the 2008 Indy 500 winner, he will remember this one for a while.