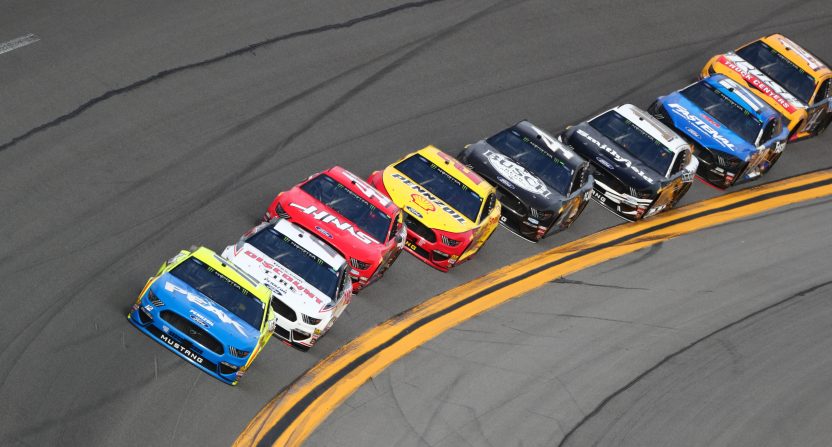 One of the great things about restrictor plate racing in NASCAR is that just about anyone can win. With engines restricted and the draft being more important than anything, a less powerful car can get a top finish and possibly win as long as they’re able to avoid all the crashes and make the right moves at the end of the race.

If you gamble, this also means that every driver has good odds. Even the favorites are coming in at 8/1 due to so many contenders having a shot and the uncertainty of racing at Daytona. That uncertainty may be a red flag for a gambler because it’s difficult to get a feel for a winner but if you’re having difficulty in predicting a winner, that also means Vegas is having difficulty doing the same. So as long as you get the winner, you’re going to make some big money. Here’s who you need to be aware of if you plan on putting some money on the Daytona 500.

This is a race where choosing a favorite isn’t as important but if you are planning to bet on multiple drivers, it’s probably smart to at least have one or two to cover your bases.

Up until a day or two ago, Brad Keselowski (17/2) was seen as the odds-on favorite but after suffering a penalty at the Gander RV Duel, he finished 20th out of 21 cars and will start toward the back and now Duel winners Kevin Harvick (8/1) and Joey Logano (17/2) join him as odds-on favorites. The bad starting spot shouldn’t have an issue and unless there’s a crash within the first part of the race, Keselowski should get up to the front rather quickly.

All three are favorites for a reason, because they are most likely to win. As far as other picks among the first 10 or so favorites, you can’t go wrong with picking a Ford. Ford drivers have not only been strong all month but they seem to be incredibly organized to keep their cars up front as they have shown in recent restrictor plate races. Clint Bowyer (12/1) and Ryan Blaney (12/1) should be worth considering as a favorite to win.

There is some good value in this range of drivers who may not be favorites but are in great equipment and have had past success on these tracks. Aric Almirola (15/1), who was so close to winning last year, won at Talladega so he should be up there. Advance Auto Parts Clash winner Jimmie Johnson (15/1) is a non-Ford driver who needs to be considered, along with Ricky Stenhouse Jr. (18/1).

Defending champ Austin Dillon (35/1) hasn’t made much noise this week but he didn’t really make much noise last year until the final lap so while I’m hesitant to believe someone will go back-to-back Daytona 500 wins for the first time since 1995, Dillon has at least shown he could do it.

One person who I really like and still has some good odds is Paul Menard (35/1). Menard may be with a single car team but the Wood Brothers work closely with Team Penske and they’re all favorites to win. Menard led the majority of the Clash and was so close to winning that and has been strong in practice all week. I would have made Menard at somewhere like 20/1 so if you want a value pick, Paul Menard is the way to go.

Here is where we’re really going to dig deep to find a potential winner. These drivers may not be in great equipment but there’s just something about them where if the planets align, they may pull off a Derrike Cope or Trevor Bayne type upset and get a shock win.

When odds were first posted, all eyes focused on how amazingly low Matt DiBenedetto’s odds were. Originally at 200/1, DiBenedetto was the one who everyone pointed to that was an easy bet. That was because DiBenedetto is in the best equipment so far in his Cup career. It’s not top equipment but Leavine Family Racing is at least midpack quality and DiBenedetto is good on restrictor plate tracks, finishing fourth in his Duel. His odds get lower by the day but at (50/1) as of Friday, Matt DiBenedetto is probably a must wager for at least the minimum bet just incase he pulls off the win, but you better do it quickly.

Two others who should be considered at (100/1) are Ryan Preece and David Ragan. Preece is a bit of a wild card since he doesn’t have much experience on restrictor plate tracks but he’s a talented modified racer and was top in Friday practice. Ragan almost won the Daytona 500 in 2011 but has two wins on restrictor plate tracks. Daytona is a big race for Front Row Motorsports, who always look to strike at these tracks. It wouldn’t be completely impossible to see Ragan take home the win for the underdog team.

There are a few people who probably should be avoided for one reason or another. Chase Elliott (10/1) is a great driver and is willing to pull off some aggressive moves that he very well could win but his odds seem too high, likely due to his many fans voting for him. If Elliott was at 15/1, I could see it but there are others who have better odds and are more likely to win.

One team to avoid is Chip Ganassi Racing. I don’t know what’s going on with that team this week but it seems like their drivers are uncharacteristically slow out of the gate, which is a shame since Jamie McMurray (60/1) is set to retire after the 500. 2017 Daytona 500 champ Kurt Busch (18/1) and Kyle Larson (22/1) may improve later in the season but I would avoid them this weekend.

The beauty of the Daytona 500 is that because the race is so unpredictable, you don’t need to know a lot about NASCAR to put a few bucks on the winner. Essentially, just like the actual race, it’ll probably come down to whoever is the luckiest on Sunday. The driver who avoids the crashes, picks the perfect spot to attack and has a little bit of help will win the Daytona 500. And that statement can describe almost everybody in the race. Good luck!