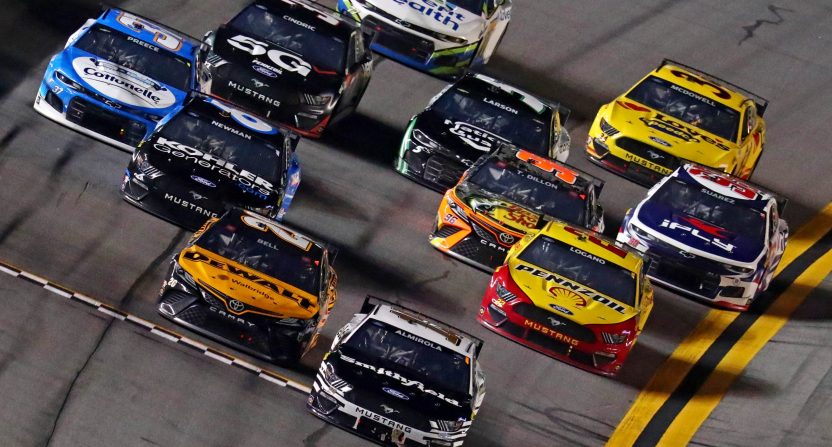 The great thing about a race like the Daytona 500 is that the people betting have as good of a chance to predict what happens as the oddsmakers. Each one of us can do all the research we want but when it comes down to it, a lot of luck is factored into who actually wins “The Great American Race.”

You can look at this randomness as a bad thing because you have less control picking a winner or see it as a good thing because even the odds-on favorite brings a pretty good return on your money.

(Odds are from BetMGM and are accurate as of Saturday, February 13)

There are eight drivers with odds at 16/1 or less. The biggest question is going to be if Denny Hamlin can become the first driver to get a three-peat at the Daytona 500. It’s certainly possible, and at 5/1, he is the odds-on favorite but I can’t see it happening. However, if Hamlin does win, it might be because I’m not in Daytona.

I have been lucky to attend the Daytona 500 twice and when I was there, Kurt Busch and Austin Dillon won those races. So in the past five Daytona 500’s, Hamlin won the three I wasn’t there for. If you believe in superstition, you may want to bet on Hamlin. And if Hamlin wins, I’ll have to see if one of the other 39 drivers will want to pay my expenses to go to Daytona next year so they can have a chance to win.

Seriously though, these are the three favorites to watch.

I normally stay away from the very popular drivers because the money put on them lowers their odds a bit but Chase Elliott is the champ and that’s going to bring some momentum. In their limited time on the track, Elliott hasn’t exactly lit the world on fire but a fifth place finish in Duel #2 was solid. Elliott knows Sunday is the big day and I have a feeling he hasn’t shown all his tricks yet.

Daytona and Talladega have been all about manufacturer teamwork and Ford seems to be the best at having the kind of teamwork that wins these races. Joey Logano is someone who can race on superspeedways and since his Daytona 500 win in 2015, he has finished sixth or better when running at the finish. The only time Logano didn’t finish was last year but like most drivers, if he can make it to the finish, he can win.

Ryan Blaney has done just about everything he could to win at Daytona but has not yet finished the job. Blaney finished second in 2017 after some drivers ahead of him ran out of fuel. He finished seventh in 2018 after leading 118 laps. He crashed in 2019 after winning the second stage. And in 2020, Hamlin just got ahead of Blaney at the finish line. In 2021, Blaney had the lead in the Busch Clash (on the road course) until Elliott crashed into him in the final chicane. Maybe that bad luck is past Blaney this year and he can win the biggest race of his career.

These are the drivers situated between 18/1 and 30/1. They are in a spot where they might not be the first person you think of when it comes to winning but after they win, you realize that it wasn’t a complete surprise. There is a lot of value among these 10 drivers and here are three to watch.

The winner of Duel #2, Aric Almirola can race at Daytona and Talladega. His two wins have taken place on superspeedways and was half a lap away from winning the 2018 Daytona 500. With a top team and the knowledge to position himself in these races, Almirola is always a threat.

When it comes to Ricky Stenhouse Jr., he’s either going to win or crash (and maybe crash others) trying. Stenhouse is all about the Ricky Bobby method where “If you ain’t first, you’re last.” And in a situation where the win is what matters, it might be beneficial to take a chance on Ricky at Daytona.

The guy who spun Almirola to win the 2018 race, Austin Dillon won Duel #1 and has a car that can move through the field. Dillon won on the 20th anniversary of Dale Earnhardt’s lone ‘500 win. As we come up on the 20th anniversary of Dale Earnhardt’s death, Dillon putting the #3 back in victory lane 20 years after that would be the ultimate for any Earnhardt fan.

There is still some value in this group but you’re now looking for diamonds in the rough. It’s still possible to find a winner and if you can find that, you will be raking in the cash. A total of 12 drivers are situated between 35/1 and 80/1 and these three are your best bets.

I was impressed with Christopher Bell in the Duel and I feel he’s set for a big year. Moving to Joe Gibbs Racing, Bell is in prime position to compete for wins and that might begin in Daytona.

Last year, I placed Newman in this spot and up until the final 500 feet, I thought he was going to win. Unfortunately, Newman had a horrible crash and everyone held their collective breath for his well-being after the hits he took. Thankfully, Newman survived and was largely unscathed. He had a bruised brain but Newman was able to walk out of the hospital a couple days later and now he’s back. Newman hasn’t missed a step so he’s certainly capable of winning this time.

Other than speeding on pit road, Austin Cindric looked great in Duel #1. The Xfinity Series champion won the Xfinity race and is looking to go back-to-back as he enters his first Cup Series race. Cindric will need to limit errors like speeding on pit road but for someone in top equipment like at Team Penske, 50/1 odds for Cindric is great value.

This is where we get to the last of the bunch. Some of these drivers might be good for a top 10 if the planets align but a win might be out of reach. Stranger things have happened and there are a couple who could shock the world.

Daniel Suárez probably should be up in the dark horse category but at 100/1, he’s certainly a long shot. With a new team that’s partly owned by Pitbull, there’s a lot of buzz with Trackhouse Racing. Will that translate to a win? That remains to be seen. Though I will say that with their focus on STEM education, I’m looking forward to seeing how this team performs.

I have no clue why he has worse odds than Derrike Cope but Anthony Alfredo is in a car that in the right circumstance can win at a superspeedway. I’m not saying he’s definitely going to win but at 500/1 odds, in a car that could win, it’s not as much of a long shot as you’d think. I would’ve put Alfredo at 100/1 so maybe put a few bucks on him with the added value. You never know.