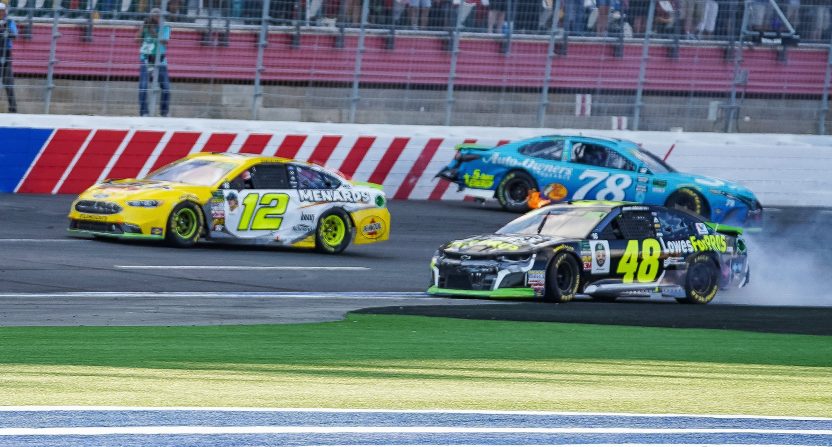 I have been a NASCAR fan for 25 years. And no matter what sport you are into, if you’re interested in it for that long, it takes more for something to impress and excite you than when you first got into that sport. I watched the first Roval weekend at Charlotte Motor Speedway and I didn’t know what to expect. But I knew I was looking forward to this race and had high expectations on what I would see.

After watching cars race on the Roval, it felt like I became a fan all over again. For one day, I didn’t think about low ratings, sponsors leaving the sport, or a worry that rule changes were ruining NASCAR. I saw close, hard racing with drivers who were racing like crazy to make passes on a tough passing track and do their best to stay out of trouble.

We already had a great race that we thought was going to end in a fuel mileage battle that seemingly became impossible for anyone to make the end of the race. And then Ricky Stenhouse Jr. overshot Turn 1 and the rest of the race would become something we’ll talk about for a very long time.

First, on the ensuing restart, leader Brad Keselowski overcooked the corner just like Stenhouse and headed to the wall. Kyle Larson did the same and hit Keselowski, and then a good chunk of the leaders became involved as the cars funneled into the left hand bend.

A big pileup in Turn 1 at the @CLTMotorSpdwy ROVAL late in the race!

We thought that was enough, but with the restart coming with a few laps to go, it would come down to a fight between Martin Truex Jr. and Jimmie Johnson. Truex, the defending MENCS champion who already advanced to the next round but is going for every win he can get as Furniture Row Racing ceases operations. Johnson, the seven-time champ, hasn’t won all year and was in danger of being eliminated but second place would have him in on points.

But this is the first race on the Roval. And Jimmie Johnson had a 51-race winless streak. And unlike preconceived notions that Johnson would be a “vanilla” driver and settle for second, Johnson wasn’t going to do that. Johnson kept it in the gas but carried too much speed into the final chicane and in trying avoid hitting Truex, still hit Truex.

Ryan Blaney saw the two spinning ahead and couldn’t believe his eyes. He got through and scored his second career MENCS win and will forever be known as the first to conquer the Roval.

But that wasn’t all. Back further in the pack, Aric Almirola, Alex Bowman, and Larson were fighting to avoid being the unlucky person in the final elimination spot. Larson’s car was damaged and everyone knew it wasn’t going to be fast with the right front tire bowed out to where it was barely touching the ground, but considering each position was worth a point and he was a few points on the outside, looking in, Larson had nothing to lose to try and finish and pass people if they wrecked at the finish.

Like Blaney capitalizing on people’s misfortune on the finishing straight, Larson did the same. After being told of the carnage ahead, Larson was told that Jeffrey Earnhardt spun out and stalled before the finish line and needed to pass him to go into a three-way tie to advance. Larson, hitting the wall twice on the frontstretch, willed his damaged car past Earnhardt and to the finish, putting himself in a tie with Almirola and Johnson. Johnson would become the odd-man out and his bid for an eighth championship wouldn’t happen in 2018.

That's an incredible race for one point that put Kyle Larson in the next round of the #NASCARPlayoffs. #TeamLarson pic.twitter.com/Q0bEdaNYv4

What we saw on Sunday was one of the best finishes I’ve ever seen. We talk about some of the classic finishes in NASCAR history, Pearson/Petty at Daytona, Allison/Yarborough at Daytona, Busch/Craven at Darlington. And this finish will be remembered alongside those classic moments that we’ll never forget.

What Marcus Smith and Speedway Motorsports Inc. have done is take something they have had for 60 years and reinvent it to show us something we have never seen before. Bruton Smith and Humpy Wheeler did that to the speedway, installing lights around a speedway that size, changed the game when I started watching NASCAR in 1992. Marcus Smith did the same thing this past weekend with the Roval. In enough time, we’ll try and figure out how NASCAR can possibly top this for next year but for now, let’s just enjoy what we saw and worry about that a little later.