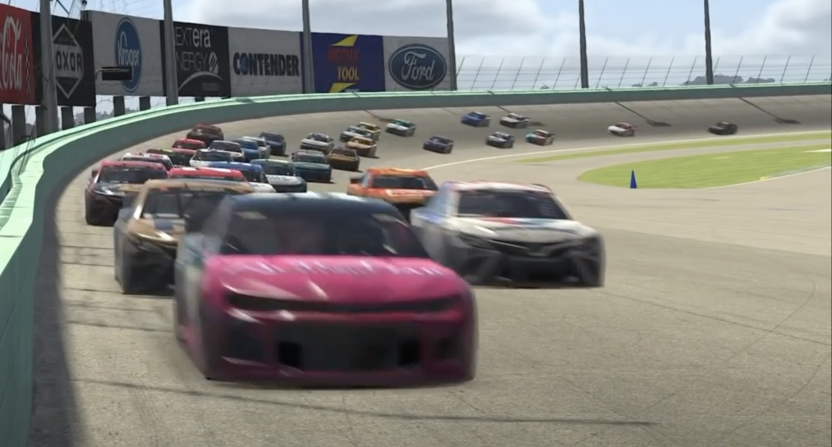 The racing world is slowly going back to real life racing. NASCAR is set to come back May 17 while the World of Outlaws starts this Friday. IndyCar is set to return in early June while Formula 1 hasn’t really announced any solid return plans. But that all means that the televised iRacing experiment that featured pros virtually racing from home is coming to an end.

For nearly two months, various racing series around the world have done some sort of virtual racing. The most popular by far was the eNASCAR iRacing Pro Invitational Series. Set to air their final race from virtual North Wilkesboro Sunday, the series gets over a million viewers per week on Fox and has been the thing that catapulted other series to bring out their own product and have their own pros race. IndyCar had a six-week series called the IndyCar iRacing Challenge while the Outlaws and Formula 1 (through F1 2019) hosted online races. In addition, invitational events popped up either on TV or streaming on Twitch.

In the two months we haven’t had any real life racing, there has been plenty of virtual racing for people to watch. And while it wasn’t exactly the real thing, it was better than nothing. esports is very popular and it’s enjoyed by many people, but many of the esports leagues are focused on Generation Z and younger audiences and are mostly streamed online. Having iRacing on TV was an opportunity to put esports at the forefront of sports and give many people their first taste of esports as a spectator sport.

That leaves the question: was televised iRacing a success? To answer that, I had to answer three main questions that would help answer my main question.

1) Did televised iRacing bring awareness to a mainstream audience?

There’s no doubt that just by being on TV, in addition to a lack of options, more people tuned into a virtual race than they ever would have had there been real-life racing all this time.

While other forms of iRacing were grouped in with everyone else in the above tweet, the eNASCAR iRacing Pro Invitational Series was far and away getting more viewership than any other virtual broadcast when races were on Fox and FS1.

Given the average NASCAR fan skews older and the average esports fan skews younger, this was a perfect opportunity to have everyone try something new regardless of age. When NASCAR goes back to racing at Darlington, it’s possible younger people who have been more about esports will try watching the real thing.

Personally, I watched more esports in the past couple months than I ever did before. Not only did I watch the broadcasts, I took a look at various drivers’ Twitch streams to get an additional experience. A huge proponent of iRacing, NBC Sports’ Parker Kligerman suggested having a camera in each car and having that camera stream on Twitch via the driver’s channel. There are plenty of barriers that keep from making that work right now, but younger people are on Twitch (a reason Amazon has been putting Thursday Night Football broadcasts there) and it’s a way for a driver to reach more people. So if it can work, it would be worth doing.

2) Did televised iRacing leave a positive impact in the series that raced and on iRacing/esports itself?

Having iRacing on TV was originally designed to be fun for the participants and an escape from dealing with the COVID-19 pandemic. For the most part, it did just that. We saw some great racing and got to be even closer within the personalities of many of these drivers. But as we saw, that added feature wasn’t exactly a great thing.

Some drivers took iRacing way too seriously, some didn’t take it seriously enough. Some drivers seemed to only be involved due to an obligation either from fans or sponsors and things very quickly became more than just a bunch of drivers having fun for the fans. At the same time, organizers still tried to act as if it was a fun escape when it wasn’t totally that. And that was just the tip of the iceberg.

A bunch of real life consequences occurred due to virtual racing and other than Bubba Wallace losing a sponsor when he rage quit a race, it really showed the bad side of the gaming industry as a whole. A week after the Wallace sponsor issue, Kyle Larson was fired from his real team for using a racial slur during a virtual race. And then over on the eIndyCar side, the end of the First Responder 175 at virtual Indianapolis resulted in multiple embarrassing moments.

The first such incident included defending Indy 500 champ Simon Pagenaud and Formula 1 driver Lando Norris. Norris was leading late and Pagenaud clearly said on his Twitch stream he was looking to “take Lando out.” Pagenaud claimed he was trying to pit and apologized to Norris but not too many people actually believe Pagenaud.

"We take Lando out, let's do it!"Simon Pagenaud official's live stream from the laps before his collision with Lando Norris.#IndyCar #iRacing

Following their crash in the #IndyCar #iRacing Challenge, Lando Norris spoke to Simon Pagenaud live on his Twitch stream. His followers couldn't hear what Pagenaud had to say, so Norris explained, then vented his frustration about the driving standards in the race.#IndyCar #iRacing

Norris didn’t have to be so condescending but he’s got a point. iRacing is a simulation that rewards you the more you play. Like in anything, practice makes perfect. So while in reality, even though there’s no points or prize money and it’s all supposed to be fun, it’s still something that people have spent countless hours practicing. And when someone pulls off a move like Pagenaud did and it shows he didn’t really care, it makes you feel like you wasted your time.

The second incident happened right at the finish. In the final turn, Pato O’Ward turned Marcus Ericsson to eliminate both of them. And then right before they reached the finish line, Santino Ferrucci turned Oliver Askew, allowing defending Supercars champion Scott McLaughlin to get the win. The O’Ward/Ericsson incident was plausible enough that it was a “racing incident,” but like the Pagenaud/Norris situation, many felt Ferrucci’s move was intentional. For his part, Ferrucci remarked on his Twitch stream it was “so intentional” and didn’t feel it was a big deal, believing the crash was entertaining for the TV audience.

One thing I learned through iRacing is that it doesn’t appear many IndyCar drivers respect Ferrucci. We don’t need to recap his history (you can read that here) and how that led him into IndyCar, but yeah, the drivers weren’t thrilled with him.

Despite all these issues, this shouldn’t affect the actual series. A few people might look back and get the sense that NASCAR drivers are racist or IndyCar drivers are a bunch of immature dolts who can only turn left but those things aren’t true and those series are going to move on.

Having said that, these childish and inappropriate actions will further the stereotypes that have plagued the gaming industry, squandering an opportunity to show the masses that they aren’t that. Which leads to…

3) Did televised iRacing motivate me to sign up for iRacing?

I have to admit, iRacing does look fun. The tracks are realistic in terms of the surface and the cars have realistic handling. Not everything is perfect but it’s the most realistic simulation the average person can get their hands on so far.

In the beginning, I was planning what I would need to purchase in order to compete in iRacing. I didn’t need anything elaborate but I would want to get a wheel and either a PC or a copy of Windows that I can install on my Mac. And then after the pandemic is over and I (hopefully) get back to working full time, I can buy what I need and sign up for iRacing.

Now, it just seems like people like Larson, Pagenaud, and Ferrucci simply confirmed why I don’t play online in the first place. iRacing suspended Larson and Executive VP Steve Myers condemned what happened at virtual Indianapolis, but if the pros aren’t going to take iRacing seriously, that doesn’t give me much faith that the rest of the community does either. Right or wrong, those drivers have put iRacing, and eSports in general, in a bad light.

I might be overreacting and I’m too focused on a few bad apples, but when I’m looking to spend nearly a thousand dollars just to have the equipment to sign up and pay $15/month to race, I want to feel confident I’m going to have fun. That I’m not going to feel like I’m wasting my time when someone wrecks everybody just because. And that I’m not going to be threatened or be called something horrible just because. At least if someone calls me a horrible name if they disagree with something I write on this site, I get paid for that. I don’t have to pay a bunch of money for the “privilege.”

So, was televised iRacing a success? Well, it wasn’t perfect by any stretch, and things could’ve been much better given the opportunity presented. But in the end, it was still a net positive in terms of the exposure iRacing and eSports got. I can’t say I personally will sign up for iRacing anytime soon, but this experiment was a huge step in showing a mainstream audience what gaming can be and how iRacing can be entertaining as a spectator sport. With real racing returning, that doesn’t mean virtual racing has to go away. And if iRacing, NASCAR, IndyCar, and any other series can keep this momentum going, there will be more virtual racing to complement the real thing, and that can only be a positive for everybody.