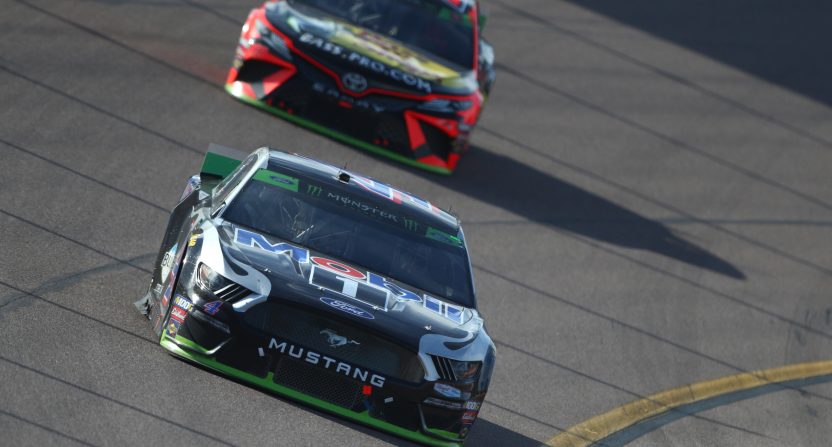 The 71st NASCAR Cup Series season is wrapping up this weekend and the more things change, the more they stay the same. The series introduced a new rules package meant to improve the racing at many tracks. And after 35 races, we head to the 36th and final race at Homestead-Miami Speedway.

This year’s Championship 4 is dominated by Joe Gibbs Racing cars and with good reason. Gibbs cars won 18 of 35 races so far, including 17 from the three (Kyle Busch, Denny Hamlin, and Martin Truex Jr.) who are racing for a championship. The lone outsider, Stewart Haas Racing’s Kevin Harvick, started his winning form late but he turned it on at the perfect time to get in a familiar position at Homestead.

The great thing is if you look at the odds, all four drivers are pretty equal so this is anybody’s title. The Westgate in Las Vegas has Busch and Truex as 5/2 co-favorites with Hamlin and Harvick just behind at 14/5. All four have a legit shot at the championship so which of these four will do just that? You can see all this and more on free sports streaming sites.

It’s strange to call Kyle Busch an underdog (because he really isn’t) but he hasn’t exactly had the best 2019 season. I say that given Busch won four races and amassed 16 top 5’s and 26 top 10’s. We all wish we could have such a terrible year.

The reason why many haven’t really looked at Kyle Busch as a favorite is because his last win was in early June at Pocono. Busch is in the middle of a 21 race winless streak which is rather uncharacteristic but he seems to step up in the face of adversity.

Just look at the year he won the championship. Obtaining a medical waiver after breaking his leg and foot at Daytona and when he came back a few months later, Busch fought to move up the standings and get in the NASCAR Playoffs. From there, Busch progressed in each round and then defeated Harvick to win his first Cup championship. I guess what I’m trying to say is that Kyle Busch has been through much worse on the track and succeeded so overlook him at your own peril.

If momentum is any indication, you can give Denny Hamlin the trophy right now. The only one of the four who hasn’t experienced what it has felt like to be a Cup Series champion, Hamlin can make a claim he has had the best 2019 season of the four.

Beginning the year with his second Daytona 500 victory, Hamlin tallied five more wins and earned a career high 19 top 5’s and 23 top 10’s. After having a winless 2018 season and some unfounded talk about being replaced for Christopher Bell, Hamlin re-signed with Gibbs and has rewarded JGR by having a career year and is racing for a championship for the first time since 2014.

One thing that can propel Hamlin to a title is the man can win in high pressure situations. Along with the Daytona win, Hamlin has wins in the final race of the past two playoff rounds, including a must win at Phoenix. It’s tough to go against someone who has come through on so many must win situations and a win at Homestead would be the perfect bookend on a magical season.

Kevin Harvick is the only non-JGR and non-Toyota driver in the Championship 4 but Harvick definitely deserves to be in this spot. A bit of a late bloomer this year, Harvick got his first win in mid-July but when he won at Loudon, he was getting back to his phenomenal 2018 form, including having a win at the Brickyard 400.

With 14 top 5’s and 20 top 10’s, Harvick’s stats weren’t exactly like 2018 but they fit a pretty successful Kevin Harvick season. In fact, in Harvick’s 2014 winning year, he had similar stats so it’s not out of the realm of possibility that at the end of the day, Harvick will be enjoying some Busch Beer in celebration.

In his first season at Joe Gibbs Racing, Martin Truex Jr. didn’t skip a beat from his time at Furniture Row Racing. Not only does Truex have the most wins this season (7) but he has the most wins in the Playoffs (3).

Truex really became an all-around winner in 2019. When he won the championship in 2017, Truex was a specialist on the intermediate tracks as he won seven times on those 1.5 mile tracks with a win at Watkins Glen. This year, Truex won at a road course (Sonoma), two short tracks (Richmond twice and Martinsville), a one mile oval (Dover), and at two intermediate tracks (Charlotte and Las Vegas).

I’m picking Truex to win this year’s championship because he is now an all-around racer. Truex has no weaknesses and has only been stronger now that he’s with JGR. Truex was dominant two years ago and I could make a compelling argument he’s even better now. And when you take into consideration that Truex was one position away from winning last year and thus would be competing for a third consecutive championship, he will definitely be there at the end of Sunday’s race.