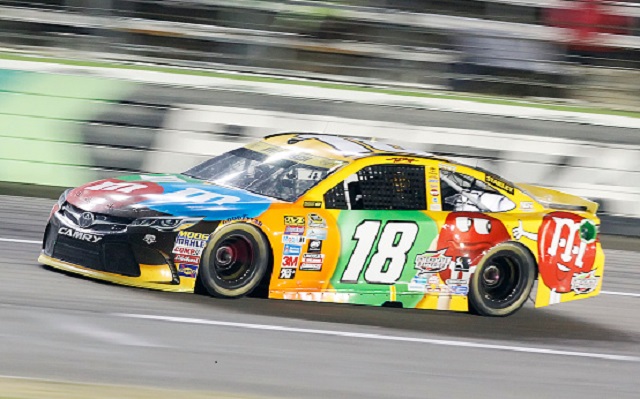 The NASCAR season wraps up this Sunday at Homestead-Miami Speedway. For the first time, in all three series, four drivers will race in a “winner take all” race to determine the champion. The Camping World Trucks will race Friday, the Xfinity cars roll off Saturday and the main event, the Sprint Cup finale, will close things out Sunday.

No matter who becomes champion, the day will surely be memorable and possibly historic. Three-time champion Tony Stewart will be in his final Sprint Cup race and there is a chance for Jimmie Johnson to achieve NASCAR immortality, joining Richard Petty and Dale Earnhardt as a seven-time champion.

So who has the edge going into Homestead and who is walking away with the Sprint Cup championship? Here’s what you need to know about each of the “Championship Four.”

Kyle Busch has come back from a lot to get to this point. Last season started with Busch breaking his right leg and left foot in a brutal crash at Daytona. Forced out the first 11 races and not knowing if he would get back to his winning form, Busch rehabbed and returned in May for the Coca-Cola 600.

In older point systems, Busch would be mathematically eliminated after missing just a race. But in the current Chase playoff/tournament point system, a win along with being top 30 in regular season points gets you into the playoffs. It took Busch a few races, but he eventually won at Sonoma and after winning three races in a row (including the Brickyard 400), Busch weaved through the unknowns of the new tournament system and won at Homestead to complete his comeback and win his first Sprint Cup championship.

This season, Busch has been a bit more methodical in his racing. Early wins in Martinsville, Texas and Kansas pretty much sealed his spot in the playoffs. Adding another win at Indianapolis made it four wins for Busch. Not winning in the playoffs meant Busch had to survive on points. In elimination races, Busch finished second in Dover and Phoenix and only finished 30th at Talladega because he would advance if he hadn’t run into trouble. Busch will look to improve on 2nd and become just the 11th person to win back-to-back championships.

Carl Edwards has come the closest anyone has ever been to winning the Sprint Cup championship and not actually won it. After leading the regular season, Edwards also took over the 2011 Chase for the Sprint Cup and with just four races left, Edwards was out to a 14-point lead.

Tony Stewart was 19 points behind at that time and if he wanted to win his third title, he needed wins and needed them badly. That was just what Stewart did, winning the next two races at Martinsville and Texas. Stewart needed to win because Edwards finished ninth and second, and needed the bonus points of winning to catch up to Edwards. After a second-place finish by Edwards and a third-place finish by Stewart at Phoenix, the two were separated by three points.

Going into Homestead that year, Edwards won the pole and led the most laps, but was forced to be behind Stewart at the end as Stewart drove for the win and tied Edwards in points. And due to having more wins, Stewart won the championship.

Edwards hasn’t forgotten that and five years later, Edwards is back with a chance at his first championship. He and Busch are teammates, and I’m sure either will be happy if the other wins the title. But if the two are fighting for the win, don’t be shocked to see the teammate rules go out the window and it’s every man for himself.

Jimmie Johnson is going for history. After winning five straight Sprint Cup championships from 2006 to 2010, Johnson launched to stardom to become one of the legends of the sport. Only Cale Yarborough had come close to what Johnson did and he could only win three straight.

Adding a sixth title in 2013, Johnson sat one away from the pinnacle. If Johnson wins on Sunday, he will tie Richard Petty and Dale Earnhardt as seven-time champions, most of anyone in the sport. If there were any doubts of Jimmie Johnson’s place in NASCAR history, this would take care of that.

This postseason, Johnson seemed like he could turn his winning form on and off like a light switch. In the previous two rounds, Johnson won in the first race each round and automatically advanced. Because of this, Johnson and his team probably have had the least stress of any team (if that’s actually the case), but he and Chad Knaus sure have the experience to go through and survive a high pressure situation like winning a championship.

Joey Logano probably should have won the Sprint Cup championship last year. At the very least, he should have had an opportunity at Homestead. The Daytona 500 champion that year, the 25-year-old Logano was well on his way to winning his first Sprint Cup championship. After winning the week before and clinching a spot in the third round, Logano and Matt Kenseth went for the win and Logano drove Kenseth hard into turn 1 in the final laps at Kansas, spinning Kenseth out and onto the win.

Kenseth took offense and the resulting spinout essentially ended Kenseth’s chances of winning the championship. While he was out, he wanted to make sure Logano couldn’t win either. So after the Talladega race, Kenseth got revenge on Logano at Martinsville, essentially driving Logano into the wall and caused Logano to be eliminated. Kenseth would be suspended for two races because of the crash.

Over the next year, Logano expressed regret about his involvement, or lack thereof, in the situation. Logano still didn’t really feel like he did anything wrong at Kansas, but felt that if he was maybe more mature about things afterward and had called Kenseth to at least explain his side and try and get Kenseth’s side, it could have smoothed things over and he may not have gotten wrecked by Kenseth.

It’s very realistic to see either of these four drivers win the Sprint Cup title on Sunday. With all drivers having some success at Homestead, this could be the closest title race yet. Last season, Kyle Busch had to win the race to win the Sprint Cup championship and that will likely be the case this year too.

What this comes down to is, in a one-race season, who do you trust to get you a win. That, plus the the fact that Toyota has been the dominant manufacturer in NASCAR this year, leaves me to believe that Kyle Busch will win the Ford Ecoboost 400 and win his second consecutive championship. But like most races, we probably won’t know who wins until the final and 10,522nd lap of the Sprint Cup season.