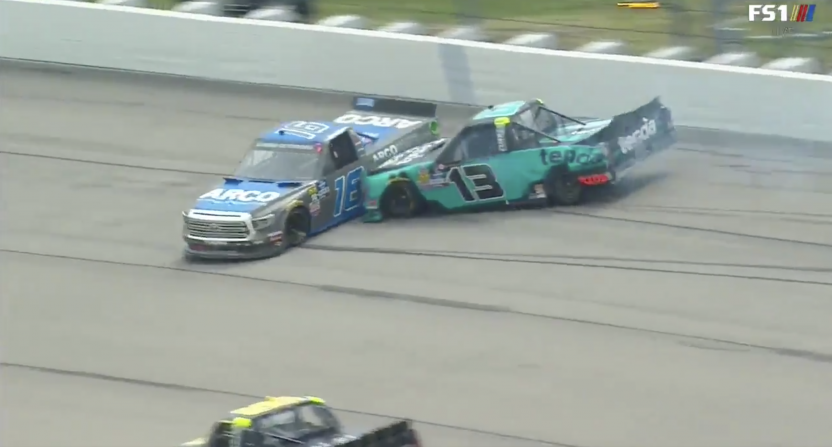 The Monster Energy NASCAR Cup Series had the weekend off for Father’s Day but that didn’t stop the excitement. The Gander Outdoors Truck Series was supposed to race Saturday night at Iowa Speedway but thunderstorms forced a Sunday doubleheader with the Xfinity Series.

There was plenty to talk about after this Truck race as one person was ‘parked’ by NASCAR for dangerous driving and the winner got his win stripped for failing inspection.

Ross Chastain, who recently declared he would go for the Truck championship, originally won the M&M’s 200. It was a move that not only got Chastain in the Playoffs (once he gets into the top 20 in points) but won a $50,000 bonus by winning the Iowa leg of the Triple Truck Challenge. And that money is huge for a team like Niece Motorsports.

Not so fast. Nearly an hour after the win, Chastain and the #44 Chevrolet failed postrace inspection and the win (and the cash) went to Iowa’s own Brett Moffitt. It was discovered that Chastain’s truck was “low on the front” and with the new rule passed this year, results are taken away for those who fail postrace inspection. That meant Chastain lost the points, lost the playoff points for the win and stage wins, lost the $50k, lost the opportunity to go for $150k next week, and will likely be fined more money and points this weekend.

Chastain got away with a potential ‘uncontrolled’ tire penalty during the race. It was pointed out on the Fox broadcast that because the Cup Series didn’t race this weekend, the camera system used to determine uncontrolled tires wasn’t installed and they used the old method of having the official on hand make the call. They obviously didn’t think that was uncontrolled but it probably would have been if caught on their system.

Now onto the Johnny Sauter-Austin Hill fiasco that happened during the race. After some hard racing, Sauter put the bumper to Hill and got past him. May have been a bit early to make that move but it’s the final stage and Sauter didn’t spin Hill. Hill came back and spun Sauter, showing his disapproval of the move, which seemed to be a bit of an overreaction.

While we’re on the topic of overreaction, knowing he was out of the race, Sauter drove up and rammed into Hill, making sure he wrecked, trying to ruin his race. Sauter was going to be out but NASCAR kept him out of the rest of the race, got invited to the officials hauler, and may face a suspension and fine sometime this week.

Past forms of retaliation have sometimes resulted in a suspension. Matt Kenseth and Kyle Busch have been suspended and there’s a good chance Sauter will be suspended as well. If he is, NASCAR must make a decision whether or not that invalidates him for the Playoffs since you must take part in every race (unless a driver obtains a medical waiver). A suspension seems appropriate not just for safety reasons but Sauter’s move could have resulted in another driver crashing into them and ruining their race for something they weren’t a part of.

This is why NASCAR is more lenient on two drivers throwing punches than when someone intentionally crashes their vehicle into the other. There’s a safety component but you not only don’t want innocent bystanders involved in the crash, you don’t want your crew to spend more work repairing your vehicle. At least when two drivers slug it out, it’s only involving them and no cars get damaged.

That being said, that should be the limit to Sauter’s penalty. Something like this shouldn’t prevent Sauter from making the Playoffs so sit him for a race, fine him if you want, but let him keep his eligibility.

That was one hectic race in the Midwest. Not sure if the Xfinity Series can compete with that later tonight but they will try.