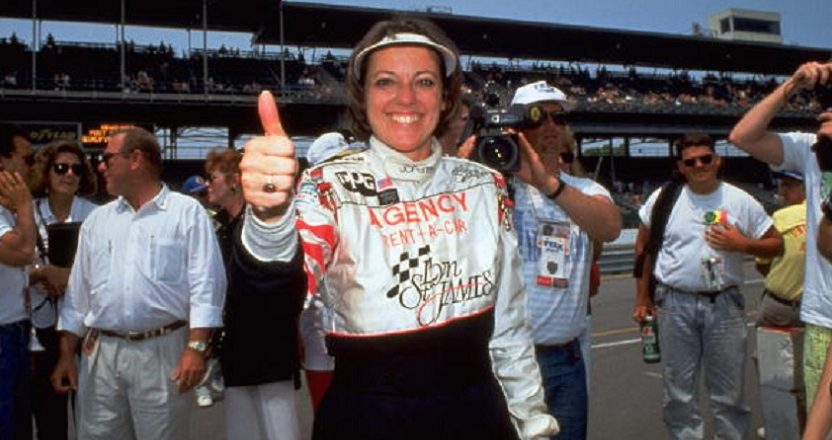 The 1977 Indianapolis 500 was monumental in a variety of ways. A.J. Foyt made history as the first four-time champion of the Indy 500. But the race also signaled a change in the speedway and in modern racing that is still seen 40 years later.

It was in 1977 that Janet Guthrie broke the gender barrier and became the first woman in 66 years to race in the “Greatest Spectacle in Racing.”

Back in the 1970s, women were largely not allowed to be in the pit areas at Indianapolis or in any pit area. If women were in the pit area of an open wheel race, they were usually the wives and girlfriends of the drivers who kept track of lap times. They surely didn’t work on the car and they definitely didn’t drive.

Guthrie tried to change that and it caused an uproar in the garage and in the media at that time. Talk about whether or not a woman could withstand 500 miles surfaced and some felt the race should keep up the tradition of the first 66 years and be men only. When Guthrie passed her rookie test in 1976, but couldn’t get up to speed due to mechanical issues and being on a lower funded team who couldn’t get top equipment, the doubters pointed at Guthrie’s gender as the reason she wasn’t fast. But as an aerospace engineer and a sports car driver for the previous decade, she was certainly capable of racing.

Many felt that if Guthrie was fast enough to qualify, she deserved to race. One of those was Foyt and to prove the doubters and sexists wrong, he had Guthrie practice in one of his backup cars to show she was fast enough with the right equipment.

Despite having the speed to potentially qualify in Foyt’s backup, Guthrie didn’t make a qualifying run in 1976 and had to wait until 1977. But because of the media frenzy surrounding her, NASCAR and Charlotte Motor Speedway President Humpy Wheeler offered Guthrie a ride to compete in the World 600 the same day as the Indy 500 to try and get a bit of PR away from Indianapolis. Guthrie finished 15th in her first NASCAR race, so not only did Guthrie prove the doubters wrong that a woman could race 500 miles, she raced 569 miles in an unknown car to her a few days before the race.

Guthrie would eventually qualify in 1977 and started 26th in the 33-car field. Again, Guthrie faced blowback but this time, it was the owners of the Indianapolis Motor Speedway with the issue. IMS speedway executives, including President Tony Hulman, didn’t want to deviate from his traditional pre-race command of “Gentlemen, start your engines” which started at the Indianapolis 500.

It wasn’t that they didn’t want Guthrie to drive, far from it. According to Foyt, it was Hulman’s idea to have Guthrie drive Foyt’s car in 1976 to help her case that she could race among the men. Hulman just felt that the tradition of saying “Gentlemen, start your engines” was so sacred that he didn’t want to change the wording despite it being inaccurate. It sounds strange to think that would be a problem in 2017, but the Indy 500 is steeped in tradition and it was an issue 40 years ago.

In fact, it was such a big issue that the speedway argued that because the drivers don’t technically start their cars and that a mechanic starts the race car from its rear end, it was accurate to say “Gentlemen, start your engines.” To get around that, Gordon Johncock’s chief mechanic — George Bignotti’s wife, Kay — went over to start Guthrie’s car prompting Hulman and the speedway to change the opening command. In a compromise, Hulman recognized Guthrie as “the first lady ever to qualify at Indianapolis” and then said “Gentlemen, start your engines.”

Guthrie would face early mechanical issues and ultimately finished 29th after racing only 27 laps, but history was made. Guthrie would compete in 1978 and 1979, finishing as high as ninth in 1978, while having a fractured wrist.

Lyn St. James, following a similar sports car path as Guthrie did, would become the second woman to qualify for the Indy 500 in 1992 and competed in seven of the next nine races, achieving a best finish of 11th.

In St. James’ final Indy 500, Sarah Fisher qualified for her first Indy 500 and the 2000 race was the first to have multiple women competing. In 2010, 2011 and 2013, four of the 33 drivers in those races were female, a current record in the Indy 500. Fisher would race nine times at Indy and become the first female driver/owner to compete at Indianapolis. In 2011, Fisher would become the first female team owner to win an IndyCar race when Ed Carpenter won at Kentucky.

In her first Indy 500 in 2005, Patrick became the first woman to lead the race and utilized pit strategy to try to win. But because she had to conserve fuel to make it to the end of the race, Patrick fell back and finished fourth. In her seven Indy 500 starts, Patrick finished in the top 10 in six races and finished third in 2009. Patrick would become the first woman to win an IndyCar race, winning in Japan in 2008.

Over the past 10 years, women at the Indianapolis 500 has largely been an international concept. Since 2007, Milka Duno (Venezuela), Simona de Silvestro (Switzerland), Ana Beatriz (Brazil), Pippa Mann (United Kingdom) and Katherine Legge (United Kingdom) made their debut and have kept on the tradition of having at least one female driver in the Indy 500 every year since 1999. Mann will continue that tradition as she qualified 28th in this year’s race.

When Janet Guthrie began racing at Indianapolis, she defied tradition so much that the speedway was hesitant to change the pre-race command. Over the past 40 years, women racing at the Indy 500 has become such a standard that it has become its own tradition over the past couple decades. What was once a big deal, now isn’t anymore as the command has evolved with the times. After 40 years, it’s tradition to hear the words “Lady and gentlemen, start your engines” and that will be the case for years to come.