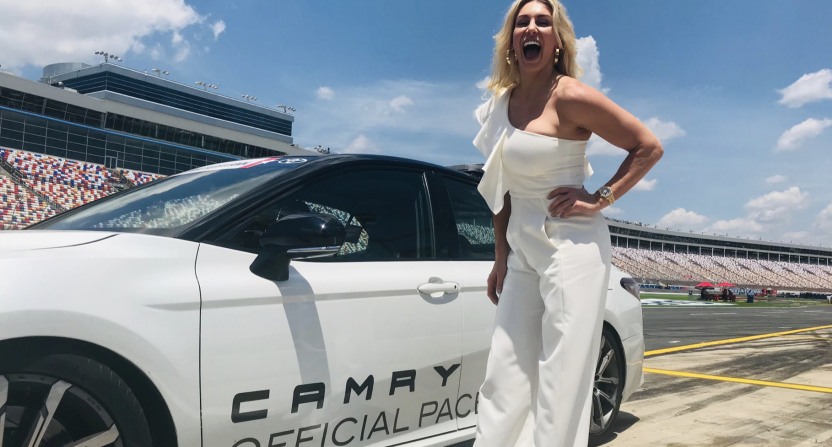 When it comes to the pro wrestling world, this is Charlotte Flair’s world and we’re all just living in it. As women’s wrestling becomes more accepted and more thrilling for fans, Flair’s career has had a similar trajectory. When she entered the company in 2012, WWE still had the Divas division, where athleticism wasn’t viewed as important and the competitors competed for a ridiculous looking pink butterfly championship belt.

Today, women’s wrestling has changed for the better and the now nine-time champion got to main event this year’s WrestleMania. Flair joined Becky Lynch and Ronda Rousey as the first women to main event “The Showcase of the Immortals.”

Now, the women’s division is something that girls can look at and aspire to join. That’s something Flair takes very seriously and hopes that whether they cheer or boo her, she is helping inspire the next generation to get into pro wrestling.

“I think [being an inspiration for girls] is our most important job,” Flair told The Comeback. “For instance, main eventing WrestleMania was so much bigger than me, Ronda, and Becky. It was sending an important message and we did it our way in being athletic and confident. Even for men as well, in having a dream and going for it. In any industry, that’s so important. Nothing beats seeing the little kids trying to high five you when you go down the aisle to enter the ring, it’s the best feeling. Whether or not they’re booing you [laughter].”

Outside the ring, Flair is a busy woman, making appearances wherever she can. That included Memorial Day weekend, when Flair had the opportunity to drive the pace car in her hometown of Charlotte for NASCAR’s Coca-Cola 600. Just like how Charlotte is Flair Country, it’s also NASCAR country, and while this was her first time doing anything as significant as driving the pace car, ‘The Queen’ has followed the sport since high school.

“It was kinda the thing to do,” Flair said. She had been to the All-Star Race and the Coca-Cola 600 as a fan as well as the Daytona 500. And while she admits it’s been a few years since she was heavily into the sport, Flair said “To come back now in my professional gear, it’s a lot different than being a fan and just hanging out enjoying it with my friends.” Asked who on the WWE roster would make the best NASCAR driver, Flair went with ‘The Phenomenal’ AJ Styles “because he likes fast cars.”

Flair was also at the race due to SmackDown coming to Fox this October. NASCAR and WWE for some reason haven’t been together as much as one may think but Flair sees the benefit of cross promotion between the two sports to attract new fans for each and create a stronger bond among fans who enjoy both sports.

“I think it’s important because we have a lot of the same fanbase,” Flair said. “And now being on Fox for WWE, to have new viewers see what we’re doing and the evolution and saying ‘Hey, there’s a female representing a sports entertainment company, not a man.’ To me, that sends a massive message.”

Hey @MsCharlotteWWE, we might be able to help you out at WrestleMania 😉. @WWE | #CocaCola600 pic.twitter.com/qO1Dd0A959

In the ring, Flair recently won the SmackDown Women’s Championship at Money in the Bank after Becky Lynch had to first defend her Raw title and then was beaten down by the recently defeated Lacey Evans. Within seconds after winning the SmackDown title, Flair was knocked out and Bayley came down to the ring to cash in her Money in the Bank briefcase to win the title. It’s now all about winning that title back.

Flair said about that night, “I think I go ‘Well, guess it’s time to become the 10-time champion.’ That’s how I felt when I left [Money in the Bank], I’m like ‘Well I’m nine, gotta be 10.’ I thought it was exciting and obviously being knocked out wasn’t ideal with Bayley cashing in on me while I was knocked out, but I’m looking forward to seeing where the story is going. I’m looking forward to working with Bayley again.”

In just seven years, Charlotte Flair is already halfway to her father Ric’s total of 16 world title reigns. With more and more talented women entering WWE, each title win will be tougher and tougher to achieve but that won’t stop Charlotte Flair.