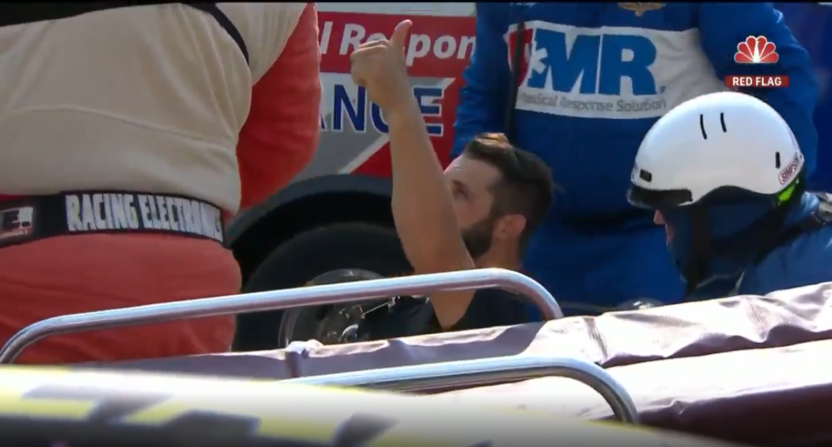 NASCAR’s Big Machine Hand Sanitizer 400 at the Brickyard Sunday saw quite the incident, with a seven-car crash on pit road leading to a member of Ryan Blaney’s pit row team getting caught between cars. The crew member, rear tire changer Zachary Price, was alert afterwards and gave the crowd a thumbs-up (seen above) before being taken away in an ambulance for evaluation. Here’s video of the pit road crash that started this:

It's a PILEUP on pit road at @IMS!

The red flag is out in the #Brickyard400 after a serious incident on pit road.

And here’s video of what happened to Price afterwards (the replay starts around 0:29), with Brennan Poole’s car pinning him between itself and Blaney’s car:

Brave people that climb over the wall on pit road.

Happy to see the @Blaney pit crew member smiling with a thumbs up after a crash in the early goings of the #Brickyard400 on @NBC. pic.twitter.com/CCAak9kCCO

Todd Gordon, Blaney’s crew chief, said on the team radio that Price would be okay:

Blaney told his crew member will be all right.

Rough transcript of what Todd Gordon told Blaney on the radio after crew member hurt leg: He'll be alright given time to recover. Looked a lot worse than it was.

And another team’s tire changer slid over to help Blaney’s crew for the rest of the race:

Team Penske provides the pit crew for the No. 32 Go Fas Racing team.

The Indianapolis Motor Speedway pit road is notoriously narrow, as mentioned in one of those clips above, and it has seen some notable collisions before. But this one looked particularly scary, especially with Price getting caught between cars. It’s good to see that Price was alert and smiling after this, and to hear that he’ll be all right in time. As per Matt Weaver of AutoWeek, Price was transported to a local hospital for further evaluation.