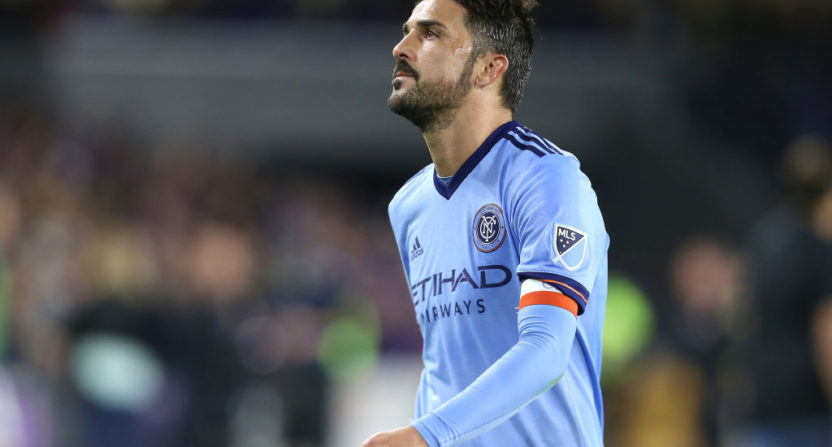 New York City FC and the Chicago Fire are, by consensus, two of the best four teams in MLS. The Fire are hanging with Toronto FC at the top of the Eastern Conference and Supporters’ Shield standings on the back of a savvy midfield and a couple of attackers having career years, while NYCFC sit immediately behind them with one of the most balanced rosters in the league.

Those two met on Saturday afternoon. Surprisingly enough, it didn’t make national TV, and operated in relative obscurity as the opening match on an extremely busy American soccer day. However, by the time it finished, those of us watching were left breathless and wholeheartedly entertained by a fast-paced, action-packed game.

The final was 2-1 in favor of the hosts despite Chicago playing a man up for a remarkable 80 minutes after Yangel Herrera picked up two yellow cards in the first 11 minutes. It’s a huge win for NYC, whose Shield chances took a blow midweek when they failed to beat massively short-handed Toronto at home, and it’s a tough, tough loss for the Fire, who in all honesty should have won fairly easily after Herrera’s early red.

This loss illustrated Chicago’s primary weakness, and the reason why they aren’t high on my list of MLS Cup contenders. The Fire struggled again when facing a team dedicated to scraping out a result by playing tight, compact defense in the center of the field. Not to mention, playing on the tight dimensions of the Yankee Stadium pitch only compounded to that. They only managed a 0-0 draw in Orlando on June 4th despite seeing OCSC go down to 10 men within 25 minutes and nine men with 30 minutes left, and they couldn’t score once in 120 minutes against bunkering USL side FC Cincinnati in the US Open Cup, eventually losing in penalties by Mitch Hildebrandt.

It’s a curious development for a team that thrives on long passing build-ups and close-range combination plays in the final third. They generally score their goals one of two ways: gradually moving the ball from back-to-front before getting it into the attacking half and whacking a ball in from the touchline to Nemanja Nikolic; or spreading the field early and spraying through-balls through the central channel to Nikolic or far wide to David Accam, who then connects with the Golden Boot leader. Bastian Schweinsteiger, of course, is at the heart of both of these.

One would reasonably assume they could come closer to replicating their chance-creation skill against bunkering opponents than others in MLS considering their propensity for quick passing and general coolness playing with the ball in tight spaces. But as shown by Orlando and Cincy and now NYC, this is not the case.

When Herrera was sent off in the 12th-minute, Patrick Vieira set his team up in an ever-flowing 4-3-1-1 that used Jack Harrison’s ability to track back and David Villa’s incredible work rate to clog the central channels to give Chicago room on the wings rather than in the middle, eliminating many of Schweinsteiger’s otherworldly effects. This gave the Light Blues the ability to jump quickly on the counter — using Villa’s winding runs, Jonathan Lewis’s smart off-the-ball movement, and Maxi Moralez’s speedy distribution — while doing as much as possible to force the Fire to create in less threatening areas of the field.

Vieira’s strategy was made clear when the broadcast mic’d him telling Lewis and others at halftime to stay compact centrally and try to prevent Chicago from penetrating through the middle. It was very informative, and if you haven’t seen it I recommend watching:

This is the best (and really only worthwhile one ever) clip of a coach giving instruction to his players.https://t.co/8NCWY0OofQ

As a result, Chicago were forced to possess the ball wider and deeper, and rarely were they able to move it from those zones into Zone 14. Alexander Ring, NYC’s defensive midfielder, was brilliant, and the Pigeons’ full backs, Ben Seat then Mikey Lopez and Ethan White, did an excellent job of pinching in at the right times to add more numbers in their defensive half and continue to force the Fire wide.

They were so organized in the middle of the field that the visitors started resorting to constant low-percentage crosses originating from Zone 15 (link above) rather than passing and moving into the channels and Zone 14. Getting to the touchline was even a problem, as shown by Schweinsteiger, Juninho and, Arturo Alvarez’s passing chart, which shows a lot of red coming from the right side of the attacking half:

This is Juninho, Schweinsteiger and Arturo Alvarez’s passing map against NYCFC. Notice how little passes went into Zone 14: pic.twitter.com/pOXHTqGqSI

A lot of that red is unsuccessful crosses from Zone 15. That’s desperation.

Similar things happened in Orlando and Cincinnati. It’s a consistent problem for one of MLS’s best teams and it’s one that will come back to haunt them later in the season, especially in tournament play against the inevitable upstarts like last year’s Montreal Impact.

Chicago are very good, but if they keep dropping games like this, they won’t be winning any trophies this year.