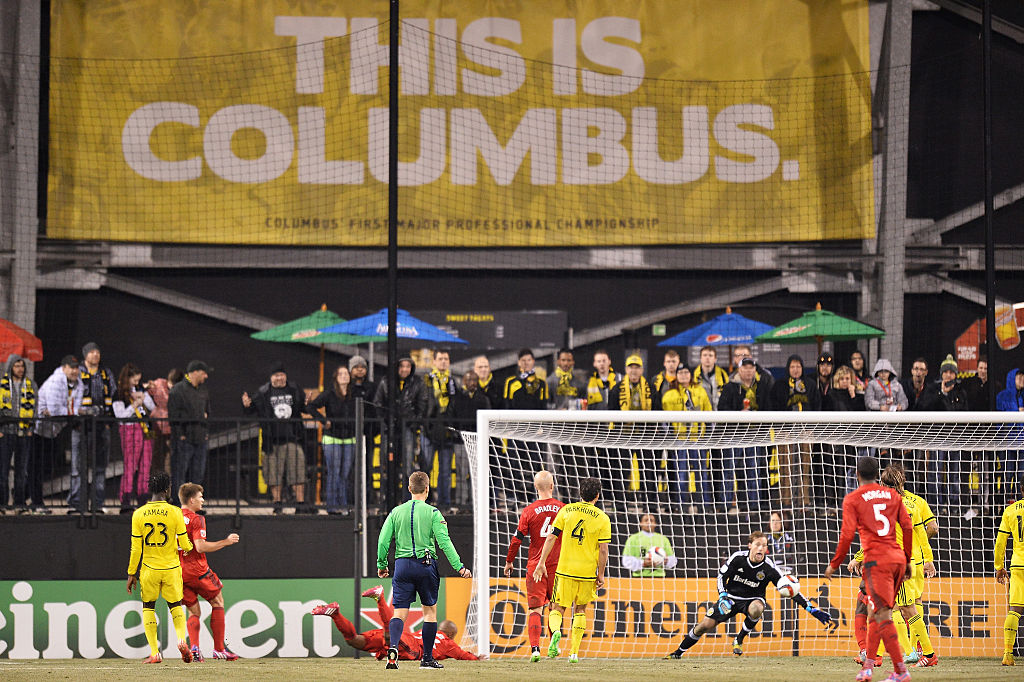 COLUMBUS – The city of Columbus, Ohio is used to hosting the biggest game in American soccer… just not this one.

Ever since 2001, the all-important USA-Mexico World Cup Qualifier has been held at Columbus Crew Stadium (now Mapfre Stadium).  Over the last 14 years, Columbus has emerged as the unlikely yet beloved spiritual home of American soccer.  When the first USA-Mexico game took place in Columbus in 2001, nobody could have ever predicted the legend and folklore that would develop, from La Guerra Fria to Dos a Cero.  The 2013 victory was the fourth consecutive 2-0 win for the USMNT over Mexico in a World Cup Qualifier at Columbus.

Soccer has swept Columbus once again this weekend, but the next USA-Mexico qualifier is still a couple years away.  This time, Columbus hosts the MLS Cup Final as Crew SC face the Portland Timbers (4 PM ET, ESPN).  And for the first time in a very long time, that same enthusiasm and support for the national team is in place for Crew SC.

“The first time I’ve ever seen a USA-Mexico environment at a Columbus Crew game was the 2015 playoffs.  Columbus is winning, so it helps the brand here,” ESPN analyst Taylor Twellman said.

It’s a final that American soccer loyalists should be fond of seeing.  Portland and Columbus are two teams with established, albeit different traditions.  Although a relatively new MLS franchise (joining in 2011), the Timbers have a long and storied history that dates back to the days of the NASL.  Crew SC are a charter member of MLS and Mapfre Stadium is the league’s first soccer specific venue.

Moreover, this is not a matchup that would be possible in other top leagues around the world.  Think of Portland-Columbus as the equivalent of Newcastle-Southampton playing for the English Premier League crown.  Portland has the 9th highest payroll in the league and resides in the country’s 22nd biggest television market in the United States.  Columbus has the 12th highest payroll and sits in the 32nd biggest market (ranking only ahead of Real Salt Lake).

After a season that saw high-profile expansion in New York City and Orlando with world-renowned stars like Kaka, David Villa, and Andrea Pirlo, it’s fitting that these are the two teams that are contesting MLS Cup 2015.  The highest salaried players on the pitch on Sunday?  It’s not Frank Lampard and Steven Gerrard, but Federico Higuain and Liam Ridgewell.

As MLS concludes its 20th season, the league finds itself laying the foundation for what could be considered its third era.  First came the infancy of MLS as it scratched and clawed through growing pains to get to a place where the league could create sustainability.  Then came the adolescence of the David Beckham years when MLS made its first move to become a player on a larger stage both at home and abroad.  Now, the league finds itself coming into adulthood with a rapid period of growth and expansion, drawing more top players and hitting new markets.  MLS will soon welcome teams #21, #22, and #23 with Atlanta, LAFC, and Minnesota and now even up to 28 teams could be on the horizon.

This era of MLS might just be defined by how well American soccer can balance the fiscal responsibility and parity of the past with its ever-growing future ambition.

That ambition can be seen in teams like LA Galaxy, Toronto FC, and NYCFC spending huge amounts of money on the likes of Giovinco, Bradley, Altidore, Dos Santos, and others.  Nevertheless, there are very few fans outside those supporter groups that want to see the big MLS spenders become an elite class like the old Top 4 in England where the same teams filled the top of the standings every single year.  The upcoming challenge for MLS in this next era will be to strike this delicate balance with the accuracy and precision of a Kei Kamara header – how do you ensure that every team has a chance to succeed while also providing opportunities for growth?

“I think you can have a nice mix,” former Crew SC striker and current ESPN analyst Alejandro Moreno said.  “You can have the big names that come in and lift the profile of the league becuase it is still a league that’s looking to solidify its place in the market.  What you would want to have ideally is that the big names perform on the field… what maybe works for Columbus Crew is not the same as the New York or LA teams.”

“If you don’t invest intelligently, if you throw your money at 2 or 3 players and the rest of your team has real deficiencies, then it shows up on the weekends.”

Former MLS MVP and current lead ESPN analyst Taylor Twellman was optimistic that the league could find a scenario that works for everyone, much like Major League Baseball.  MLB has seen a number of traditionally small-market or lower spending teams find success like this year’s World Series champion Kansas City Royals.

“Of course they can [maintain parity] as long as the rule is you can only spend it on 3-4 players,” Twellman stated.  “I think this league can grow rapidly in the quality of play if you came up with a formula, a luxury tax or whatnot, so that if Toronto or NYC want to go spend $50 million it doesn’t kill the Columbus Crews of the world.”

In spite of the recent success of LA Galaxy, the history of MLS says that parity has ruled the day.  Yes, the Galaxy have won three out of the last four cups, but Columbus, Sporting Kansas City, Real Salt Lake, and Colorado have also emerged victorious without household names from world soccer in the last seven years.

Former USMNT goalkeeper Kasey Keller thinks there might be an advantage to the approach taken by teams like Columbus and Portland.

“When you look at the history of MLS Cup, really until the LA Galaxy did it over the past few years, teams with high priced DPs don’t win the Final,” Keller said.  “You’re looking at the Top 15 priced players who didn’t make it into the semifinals.  The clubs that aren’t spending on those handful of players are reaping the benefit of being a team and building almost an ‘us against them’ and benefitting from that and having that team spirt in the locker room that is propelling them further into the playoffs and into championships.”

The Timbers and Crew SC haven’t made moves that would get time on PTI or the Bleacher Report front page, but their front office and scouting departments have made some tremendous decisions.  It seems like ages ago when Crew fans collectively lost their minds when Mix Diskerud was rumored to be joining the franchise.  At the time, the signing of Kei Kamara didn’t create the same kind of buzz.  At best, here was a proven MLS goalscorer who didn’t make it in England that might provide some scoring punch, right?  All Kamara has done is become the face of the revitalized Crew by being the league’s joint top scorer.  For Portland, Fanendo Adi and Diego Valeri aren’t going to sell jerseys like Kaka or Clint Dempsey, but they’ve been instrumental in getting the Timbers to the final.  And that’s not to mention young players like Wil Trapp, Ethan Finley, and Darlington Nagbe that will hopefully be fixtures of the USMNT for a long time to come. 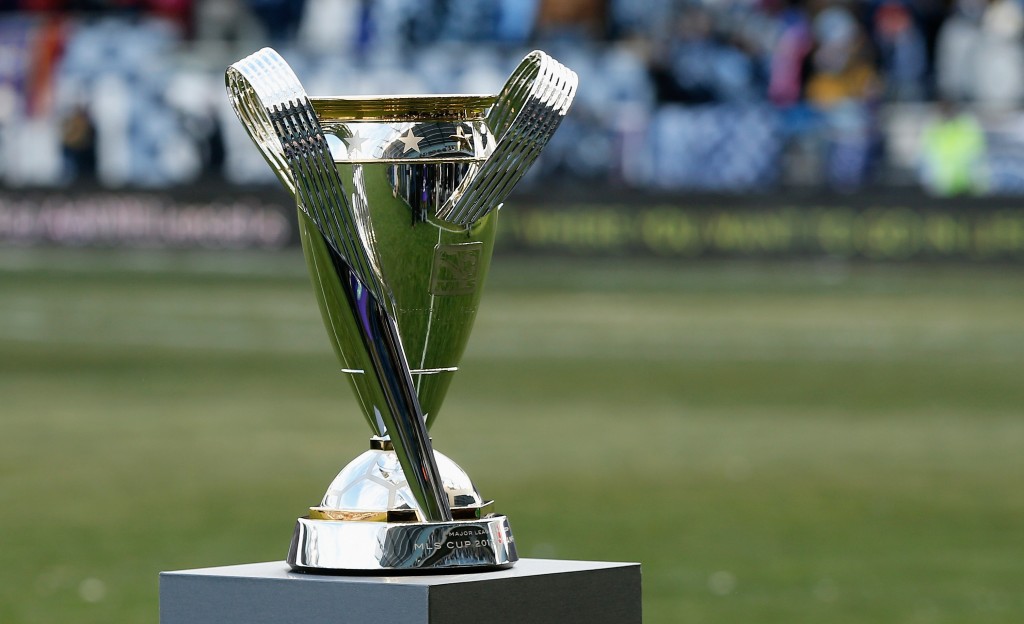 “As Ohio goes, so goes the nation.”

While the saying may have originated in the political sphere, it’s just as fitting for MLS.

It’s been a long journey for Crew SC back to the MLS Cup Final since last lifting the trophy in 2008.  New players.  New coach.  New owner.  Even a new logo and branding.  The transformation of the Columbus Crew into Columbus Crew SC has been one of the great stories in MLS.  Owner Anthony Precourt and coach Gregg Berhalter have brought life to the franchise.  Columbus has sold naming rights to Mapfre Stadium and set its highest attendance mark in 13 years.  The next step according to former hometown favorite Moreno is for that Dos a Cero US National Team spirit to be there for every Crew SC home game.

“What’s interesting is that when this team and this organization has been successful on the field it has done so because they have been able to find a core group of players that may not be the big names, but are the right names for this organization.  Those are players who connect with the people of this area.  There is something about a player who succeeds here in Columbus and how well-liked and well-appreciated they are by the fans.  When you translate that to international level it is clear there is a relationship between US Soccer and the USMNT playing well in Columbus.  If you can have that support you have for US Soccer and have it every week for Columbus Crew, then you know you’re doing something.  The job of this organization now is to create that bridge that doesn’t just show up for Dos A Cero but for every weekend.”

In many ways, Columbus is seeking to replicate the success MLS has found in smaller markets like Portland and Kansas City.  Portland’s famous Timbers Army has sold out every home game since returning to MLS and the remarkable atmospheres in the Pacific Northwest in particular have challenged the rest of the league’s teams to catch up.

“In some ways it kind of started around 2009 with the Sounders and the Whitecaps and the Timbers coming in a year or two later where you push the envelope in attendance,” the former Sounder goalkeeper Keller remarked.  “You also have to look at the rebranding and what Kansas City was able to do.  Now we’re starting to see a lot of rewards on those teams coming in and pushing things and getting attendance numbers to where people are taking notice and you’re rivaling the NBA.”

But for this moment in time in Columbus, Ohio, the Timbers and Crew meeting is a fitting symbol for where MLS is as a whole – trying to honor American soccer’s past while also planting a flag for the future.