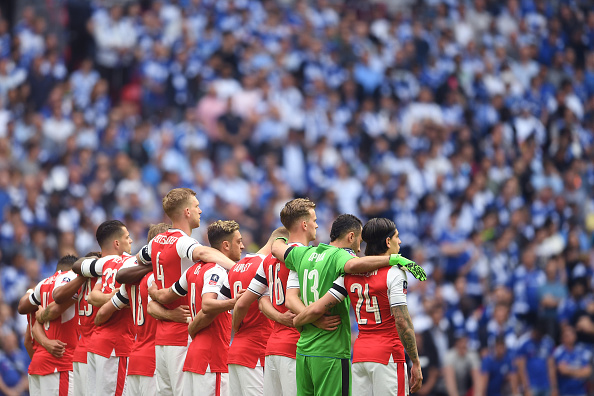 Arsenal managed to salvage some pride from this season with a 2-1 win in today’s FA Cup Final on Saturday. A controversial goal from Alexis Sanchez and a second-half winner from Aaron Ramsey was enough to see off Chelsea.

The match featured it’s fair share of controversy, with a suspect goal and a sending off. However, Arsenal were worthy winners, and with 13 FA Cup trophies they further their record as the most successful in the oldest club competition in the game.

Arsenal was the better side all afternoon, especially in the first half. The Gunners put Chelsea under pressure but never opened up much of a lead. The lone goal of the first half did come early on, however. Sanchez put Arsenal up with a goal that could have been called back for a number of reasons—most notably the fact that Aaron Ramsey was offside and made a move towards the ball, despite not actually making contact. Sanchez also handled the ball shortly before scoring.

Strangely enough, the goal was originally waved off. Referee Anthony Taylor consulted with his linesman and decided to award Arsenal the goal. It was a strange sequence that became even stranger after replays showed both the handball and offside. The Gunners weren’t complaining, however.

For much of the first half, Chelsea was on the ropes. Arsenal could have gone two or three goals up on a few occasions. Danny Welbeck, a thorn in the blue’s back line all day, hit the post. Ramsey chested a ball wide from about a yard out. Arsenal looked the better side, but their inability to put their opponent to the sword was risky.

The second half looked like Arsenal might rue their poor first-half finishing. Antonio Conte’s club looked increasingly dangerous. It seemed like they had found their footing. Victor Moses, however, handed Arsenal a lifeline. The Nigerian had already been booked, when he decided to theatrically go down in an effort to win a penalty. Taylor saw right past the attempted deceit and gave Moses his marching orders.

That should have given Arsenal the boost they needed to kill off the game, but in the FA Cup, and with Arsenal things are never so simple. Diego Costa, despite playing a man short scored with 15 minutes remaining. His deflected shot got past David Ospina who struggled to get a hand on the effort.

It was a goal out of the Blue, but Chelsea attempted to prove the old adage that you’re at your most vulnerable right after you score. Not two minutes after Costa’s equalizer, Ramsey put his side back in the lead. Olivier Giroud, who was just brought on, chipped a pass into the middle for the Welshman. The Chelsea defense, who failed to track Ramsey’s run, had fallen asleep and the advantage was back to Arsenal.

The Gunners would see out the remaining 10 minutes rather well. Chelsea tried to grab another goal, and nearly did thanks to a Costa header, but Ospina was up to the challenge at that point. Mesut Ozil had a chance to make it three one in the latter stages but he rang one off the post. The German international didn’t have to sweat that miss though, as the final whistle blew shortly after.

Arsenal can now take some positives from what has been a sub-par season. While they missed out on the Champions League next season, they will get their hands on some silverware. They’ll enjoy this win for now, but a potentially world-changing summer now lays on the horizon for the FA Cup record champions.