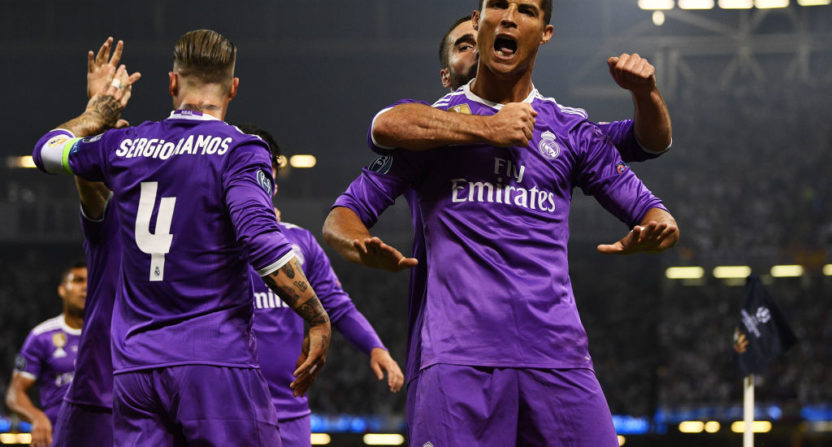 Real Madrid became the first club in the modern Champions League era to repeat as champions. Backed by a pair of goals from Cristiano Ronaldo, Madrid made quick work of, Juventus, beating the Italian champions 4-1.

Since the implementation of the modern format, no team has managed to do what Real Madrid did—though Manchester United came close in 2009.

Saturday’s match was played at a high tempo throughout, and that suited Los Blancos.

Juventus started strongly, however. The Italians put Madrid under pressure straight from kick-off. Gonzalo Higuain forced Kaylor Navas into a pair of saves early. Miralem Pjanic had the best chance in the first ten minutes, however. The Croatian thumped a low shot to Navas’ right, but the Madrid keeper was up to the task.

Despite the encouraging signs for Juventus, no goals meant Real was able to settle. The 11-time winners grew in confidence as the first half continued. Using their talented full backs, the Spanish giants created plenty of overlaps. Madrid played a number of crosses looking for their formidable front line.

After 20 minutes, Madrid’s best chance came on a Daniel Carvajal overlap. The right-back ran onto the ball and quickly cut the ball back into the path of Cristiano Ronaldo. With his first touch, Ronaldo swept the ball into the far corner to give Madrid a 1-0 lead. The goal was a great buildup and much of the credit should go to Toni Kroos. The German international made a sharp run through midfield before moving the ball into the final third. Ronaldo celebrated with his usual style, and things were looking good for last year’s winners.

Juventus was going to need to equalize as quickly as possible. The longer Madrid kept the lead the more comfortable they would become. Juventus did manage a first-half equalizer, and it was one for the ages. Mario Mandzukic, playing in his second Champions League Final, scored a stunning overhead kick that seemed to defy the laws of physics. The build-up was something special as well. A series of volleys that never touched the group set up the Croatian. Mandzukic had really no other option than to try something audacious. Even in a losing effort, it is a goal that will be remembered for a long time.

Juventus had life, but their second half was about to get very dark. As the game wore on, Madrid were pressuring more and more. The game’s high tempo was exactly what they wanted. Juventus had very little to offer going forward as the match went on.  A stroke of luck on the hour kick-started a dominant final half hour for Madrid.

Casemiro was the beneficiary of a poor clearance, and he fired a shot towards goal that took a deflection. Gianluigi Buffon could do little but watch the ball go into his net. Madrid had put themselves back in front.

Madrid only had to wait 2 minutes before they would increase their lead to 3-1. A great switch of play to Luca Modric gave Madrid’s own Croatian space to cross the ball into the middle. Juventus failed to pick up Ronaldo’s run to the near post and the Portuguese star scored his second of the match.

Ronaldo’s goal essentially put the match to bed. Real Madrid had been in control for much of the half, and by that point, Juventus looked out of gas. Life would only get harder for the Italians when Juan Cuadrado was shown a second yellow. Tired and on the back foot, Juventus would now need to overturn a two-goal deficient a man down.

Marco Asensio would put the final bit of gloss on Madrid’s big night when he made it 4-1 in the dying moments of the game. Gareth Bale was brought on as a late sub and he was able to celebrate his third European Cup in his home country.

Attention will now turn to next season. For Juventus, the big question will be what becomes of their long-time captain Buffon. The 39-year-old might have missed his best and last chance at European Glory. He’s won just about everything in his career, but a Champions League title has evaded him. He’s not getting any younger and he’s going to have to decide how much he has left.

Madrid, meanwhile, will look to do something only two team’s in history have ever managed to achieve. They’ll go for a treble of European Cups. The last time that happened was in 1976 when Bayern Munich beat Saint-Étienne. Before that, Ajax with the great Johan Cruyff won a third consecutive European Cup in 1973.

Until next season, Ronaldo and company will enjoy this win. They’ve written themselves into the history books with a terrific performance. In a few more months they’ll get to try to do it again, and all of Europe’s best teams will be standing in their way. Zinedine Zidane and his men seem up for the challenge.