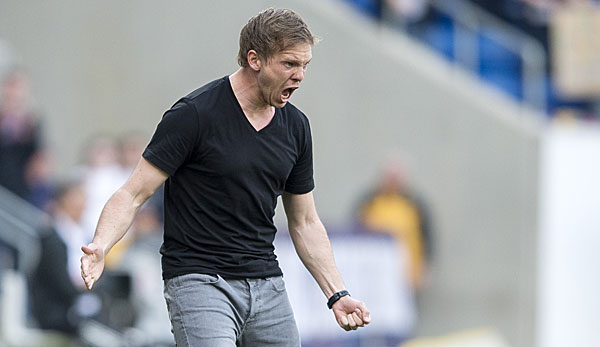 There’s a saying when it comes to hiring someone for a job. “If you’re good enough, you’re old enough.” Hoffenheim put that into good measure when they hired then 23-year-old Julian Naglesmann to be an assistant for their U17 team.

Six years later, Naglesmann was promoted to manage the senior squad. Think about this for a second. Hoffenheim trusted a 29-year-old, who never played professional soccer, to take over their team and bring them out of relegation. That kind of logic doesn’t compute with any team in any sport. Even risk-takers would say this was an insane thing to consider.

But Naglesmann took over and this millennial has led players older than him as well as stare down some of the best soccer minds in the world. Last season, Naglesmann got Hoffenheim out of relegation and finished 15th in the German Bundesliga, surviving relegation by a single point.

Fast forward to today and this small Hoffenheim team has done a complete 180 thanks to Naglesmann. With just three games to go in the Bundesliga, Hoffenheim sit 3rd in the Bundesliga (a point ahead of Borussia Dortmund), clinched a UEFA Champions League spot for the first time ever and will clinch their highest position in their 117 year history.

While Naglesmann was an academy player in Germany, he never did play as a professional. Despite being on a pro team for two seasons, Naglesmann never played. Even though the majority of the top coaches and managers of every sport are have brief and underwhelming careers, they at least played.

And to give you a glimpse of how Naglesmann’s season has gone, Hoffenheim only has three losses this season and has a win and a draw over Bundesliga champion Bayern Munich. At this point, Julian Nagelsmann has a 1-1-0 managerial record against three-time Champions League and Premier League winning manager Carlo Ancelotti.

It’s only a matter of time before a bigger team, whether in Germany or elsewhere in Europe, will want to hire Naglesmann. Right now, he seems comfortable running Hoffenheim, a team in a town with just 3,200 people. I’m only a few months younger than Naglesmann and the closest I’ve come to running a Champions League team is either on FIFA or in Football Manager. Julian Naglesmann will have an opportunity to compete against the big teams in Europe in real life. In an industry where someone in their 40’s is considered young, 29-year-old Julian Naglesmann is definitely old enough.