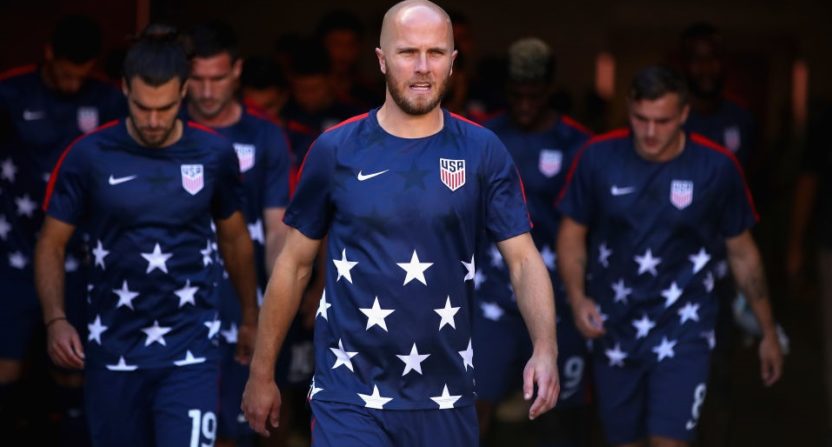 After a lengthy qualifying campaign, the fate of the United States men’s national team remains undecided heading into upcoming games against Panama and Trinidad & Tobago. Granted, it’s still Panama, and it’s still Trinidad & Tobago. But unfortunately for the USMNT, they’re still the same USMNT that lost to Costa Rica twice in this round of qualifying, and needed a last gasp goal to draw Honduras just last month.

Should they beat Panama, the United States will be in pretty good shape to make the World Cup in third place, avoiding a potential playoff with either Syria or Australia, the fate the awaits the fourth place CONCACAF team. That’s a big deal for the United States, because at this point, the last thing they need is another chance to miss the World Cup entirely.

That’s a doomsday scenario for the United States. They’ve qualified for seven in a row, but prior to 1990 the United States hadn’t been to a World Cup in forty years. That 1990 qualification became the new normal, especially after the rousing success of the 1994 World Cup. MLS was borne out of that experience, and despite up and down showings in the World Cups themselves, the qualification has been a steadier process throughout.

But the growing strength of the CONCACAF region (Mexico and Costa Rica are both probably clear of the United States in terms of talent and results, while the lesser teams all have at the very least tremendous home field advantages) combined with a stagnant player pool and coaching upheaval have created a perfect storm over the last year or so. That means that the specter of a missed World Cup is very much on the minds of everyone involved with the program.

How #USMNT's SPI chances to qualify for the World Cup will change based on Friday's result.

Apparently this game is a big deal. pic.twitter.com/VUqsSdLsLK

Driling deeper: SPI chances for #USMNT to finish 3rd/4th in Hex, based on Friday result.

It’s almost unthinkable, but qualification isn’t a right. Should the United States fail to make it, the national team will see immediate changes. Bruce Arena, brought on specifically for the final stages of qualification and then the preparation for and playing of the World Cup, would likely be gone; at the very least, he’d be an immediate lame duck. The national team wouldn’t play another meaningful game until the 2019 Gold Cup, a gap of nearly two years. Veterans of the team, including names like Clint Dempsey and Tim Howard, would almost certainly be finished playing at the international level.

There’d be a massive fluctuation of the senior program, as there should be if such a disaster were to occur, but any progress for the new regime would be difficult to chart given the lack of competitive matches.

And that’s just on the field. Off it, the United States would lose its chance at participating in the sport’s biggest draw. Ratings were fantastic in 2014, with crowds gathering for watch parties all over the country, thousands of people exploding in celebration when Clint Dempsey and John Brooks scored against Ghana. Not everyone knows the ins and outs of soccer, but just about everyone knows the World Cup. It’s a chance to capture fans, and at the very least offers the most easily earned exposure and legitimacy in this country. It’s hard to gauge just how much it would set the sport back, but for a rising game, any loss of progress is an inherent regression.

The United States is also jointly bidding for the 2026 World Cup with Mexico and Canada, and though a missed World Cup likely wouldn’t hurt the bid (the only other credible contender is Morocco, and credible is a stretch), that World Cup would be absolutely crucial to the sport, and any bumps on the way there limit the potential gains on the back end.

But, again, all this is irrelevant if the United States handles business on Friday against Panama, and on Tuesday at Trinidad & Tobago. Bruce Arena has called in an interesting roster, one that speaks to a need to cover for potential yellow card suspensions in the final game and also to a potential formation change; indeed, the Americans have looked more effective playing a 3-5-2 than anything else, and having the right personnel to go after a goal late is crucial. Arena and the team know the stakes. These are as must-win as qualifiers get.

Hopefully the United States can deliver a World Cup appearance.