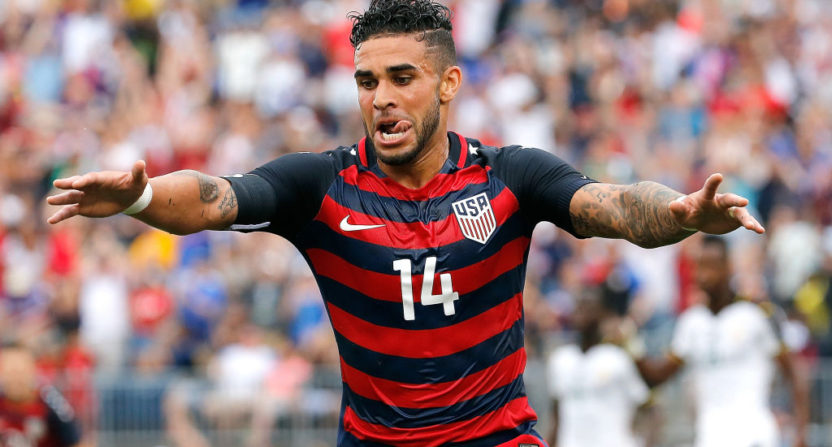 Another Gold Cup begins for the United States Saturday afternoon in Nashville against Panama, and though it is an off-year Gold Cup in which Bruce Arena has not brought his best squad, there are many players who need a good tournament if they want to be included in the World Cup squad a year from now. This squad has an interesting mix of players who are almost guaranteed to go to Russia should the USMNT qualify, some who would need to light the world on fire, and others in between the two extremes. Here are five players who, if they breakthrough with a great Gold Cup, would serve them incredibly well to book a plane ticket to Harrison, NJ in September for World Cup Qualifying and maybe in Russia next June.

Jozy Altidore and Bobby Wood are guarantees to make the World Cup squad. It would be a major surprise if Clint Dempsey wasn’t in the squad for his fourth World Cup too. So there is ostensibly one forward spot left for someone like Dom Dwyer to grab. His style of play is a more direct replacement for Altidore, which is something the U.S. didn’t have in Brazil and really hurt them when he went down injured, making his future with the Stars and Stripes an intriguing one. He figures to start in the group stage as the #9 in whatever lineup Bruce Arena throws out, so he will get his chance to impress early and often. Making it to the World Cup after only being in the national team set-up for a year would be a major achievement for Dwyer, Sporting Kansas City and MLS, and due to the importance of the qualifiers ahead, this is almost certainly Dwyer’s best chance to catch Arena’s eye in a competitive setting. There may only be one spot open for a forward in the World Cup 23, so the competition will be fierce, not just with Dwyer and opposing backlines, but also with some of his teammates, like…

There is no doubt that the 22-year-old Morris is still a prodigious talent. But his hype train has derailed slightly in 2017. A nagging ankle injury has held him to only two goals with Seattle, not to mention he’s one of those tweener players whose best position isn’t very obvious. Because of that, his USMNT future, which once looked to be set in stone, is now in doubt. He needs a good tournament, even against lesser opposition, in order to get himself back on the plane to Russia, and potentially into the squad for the upcoming September qualifiers. He needs to get healthy first and foremost, and then his confidence will come. But maybe that process could be jump-started with so many games against lesser opposition on hand for the U.S. Suffice to say, he needs it pretty badly.

Dax is a beloved figure, leader and midfielder in MLS both for his former New York Red Bulls and his current Chicago Fire. He is 30-years-old, so his best chance for a World Cup is now. He’s also assisted by a relative lack of options in defensive midfield for the USMNT, meaning a good slate of performances could really earn McCarty a great position in the squad. McCarty’s strengths are aspects of his game that other midfielders in the pool outside of the rapidly deteriorating Jermaine Jones don’t possess, which could be an asset in future crunch games. As with Dwyer and Morris, he’ll have a chance to make an impression right off the bat in the group stage, and good performances are a must for his future. Because he’s been in the squad for recent qualifying sessions, he may have an upper hand on other players he’s competing with, but a good Gold Cup won’t do him any harm.

Lichaj has been a popular name that many have wanted to see called into camps since Jurgen Klinsmann’s tenure, and he may finally have a great chance to earn his place at this Gold Cup. Forest’s captain is a versatile fullback who can play on either side, and while DeAndre Yedlin may have the right back spot locked down already, left back is still certainly a question mark. Thanks to his versatility, great performances on other side of the pitch could earn him a trip to qualifiers and beyond in a position that is still quite weak in the pool.

“I don’t make excuses if I play on the left. It’s not playing out of position. If I’m playing right or left back, I can produce something for us or if I’m called up with the USA. I know I can do it there,” Lichaj told FourFourTwo in February, and now he has the chance to prove it in front of Bruce Arena. Versatility is one of the strengths of the U.S. player pool, and Lichaj’s presence would only add to that.

Putting Guzan here might seem weird, because in theory, he should be nailed on for that trip to Russia, and especially the qualifiers in September. But, Guzan’s recent club odyssey with Aston Villa and Middlesbrough, two clubs that were relegated, has harmed his reputation and his play. He played sparingly for Boro before they were relegated, and has yet to start with his new team, Atlanta United. Therefore he has a lot of work to do to potentially ensure his place on the team, but more importantly challenge Tim Howard to be the starter down the line. In theory, Guzan has the least to gain from the Gold Cup and the most to lose, which is why he needs a great tournament more than almost anyone else. One could argue the U.S. has co-starters at the moment with Howard and Guzan, which is not the best setup to be fair. One of these two will eventually earn the starter’s gloves, and if Guzan wants to get close to those, he needs to succeed at the Gold Cup, and he has a chance to do so.

Up to six players can be changed and replaced when the knockout stage rolls around, and it’s possible Bruce Arena could bring in more of the regulars in the squad such as Dempsey, Altidore, Howard, etc. for that final effort for the trophy. But many of these players will play huge roles in the group stage and beyond of this Gold Cup no matter what changes are made in a week or so. Since this is the last chance many of them will have in a competitive setting to impress Bruce Arena, they need to take it if they want to make future USMNT squads before the rest of World Cup Qualifying, let alone that plane to Russia.