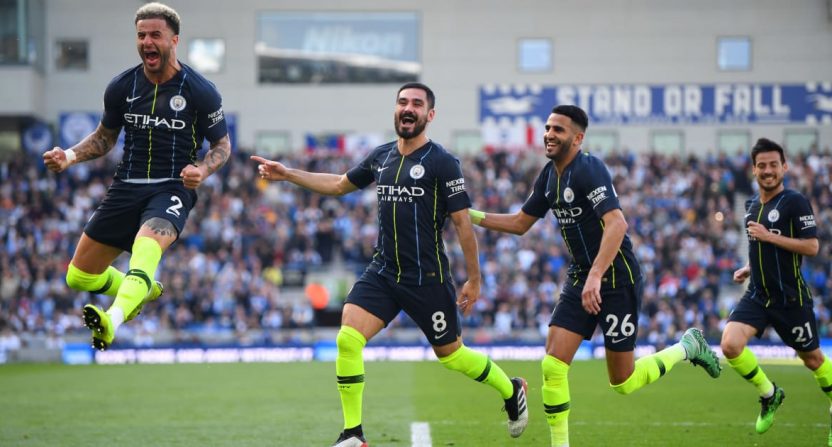 In sports, people always talk about how they wished both teams could win. With this Premier League season, that statement could not be more true when it comes to Manchester City and Liverpool. Alas, winning isn’t about who deserves it, it’s about who has the most points and that is Manchester City who came back from a brief deficit to Brighton to win 4-1.

This was a season that no one has ever seen. In years where Premier League champions have typically won with totals in the 80s, Liverpool and Manchester City entered the final game with 94 and 95 points respectively, and wins would give them second and third highest point totals in Premier League history. Only City’s 100 point title win last season was better.

On the final day, there was an early stretch of excitement as Liverpool took an early lead thanks to Sadio Mane. The lead change meant that Liverpool were in the virtual lead of the Premier League title chase but everyone thought Man City would answer and grab the lead.

The pressure is mounting in the title race. #MyPLMorning

But just 10 minutes later, things got interesting in Brighton. Glenn Murray got on the end of a Pascal Gross corner kick and put in a scare to Manchester City while giving a bit of hope to Liverpool.

That excitement lasted approximately 83 seconds before Sergio Aguero made a turn on Shane Duffy and got a clear shot at goal to equalize. City stopped the bleeding but needed a goal to take the lead and the title.

That leading, and ultimately Premier League clinching goal, came at the 38th minute when Aymeric Laporte crashed through like a bull at a china shop to head in the corner.

Manchester City go up! A MASSIVE goal on this final day of the Premier League season. #MyPLMorning

That was that for Man City where in the second half, Riyad Mahrez and Ilkay Gundogan scored great goals to put them up 4-1 and in cruise control for the Premier League title. Liverpool kept them honest, even scoring late to win 2-0 but there was nothing they could do.

Manchester City had been in control of their own destiny for months. City had to end the season winning 13 in a row and hadn’t dropped points since January 29 in Newcastle. For all the talk about Liverpool slipping and bottling it, they didn’t do that at all. Sure, one could point out that they got a bit lucky on some fortunate bounces in some games but everyone who finishes high gets fortunate every once in a while. Man City had that too in games they may not have been at their best and still got three points. That’s the nature of the beast. Anyway, after only losing once and that one loss being against the champs at the Etihad, there isn’t much else Liverpool could have done to be more efficient this season. This season was more about Manchester City being the better team over 38 games, not because of Liverpool choking it away for some reason.

Both Manchester City and Liverpool have one more game for a trophy. City faces Watford for the FA Cup while Liverpool play Tottenham in an all-English matchup for the Champions League. A City win would give them the domestic treble, which has never happened within the Premier League, FA Cup and EFL Cup combination.

In the rest of the Premier League, Tottenham drew Everton 2-2 but it was enough to finish in the top four and seal a Champions League berth with Chelsea. Arsenal finished fifth but have a chance to make Champions League with a win in the Europa League. United embarrassed themselves one final time this season with a 2-0 loss to relegated Cardiff at Old Trafford.  Along with Cardiff, Fulham and Huddersfield had already been relegated with Huddersfield enjoying a 1-1 draw to Southampton and Fulham losing 4-0 to Newcastle.