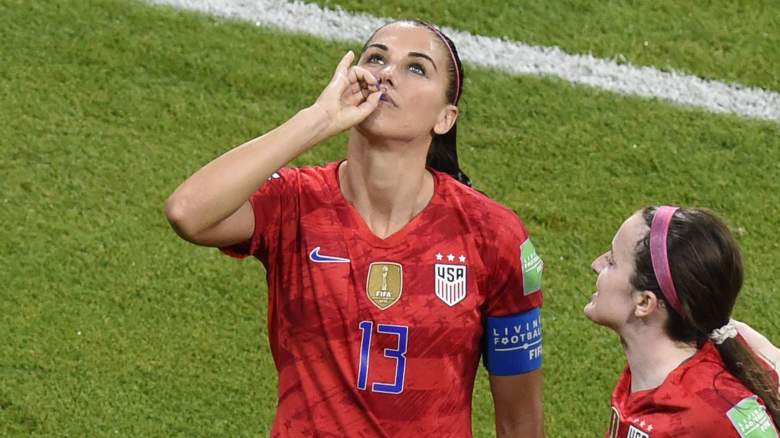 When it comes to tournament play, the fewer teams are left, the tougher it is to win. That was personified as the United States faced England in the FIFA Women’s World Cup semifinal. Having to play without an injured Megan Rapinoe, the USWNT went with Christen Press starting instead. And after that, a Rose Lavelle injury, an England goal called off for offside, and a penalty ruled by VAR which was saved, the USWNT persevered and defeated England 2-1 to go to their third consecutive Women’s World Cup Final

Once it was reported that Rapinoe was out, social media blew up. US Soccer was very cryptic and secretive, only saying she wasn’t benched for disciplinary reasons and to ask Ellis after the game. After noticing she didn’t warm up, reporters in France wondered if there was an injury. Eventually, Fox Sports host Rob Stone revealed during halftime it was a hamstring injury for Rapinoe but no one knows the severity.

Anyway, as has happened in their previous five games, the USWNT got off to a great start. One of those was Rose Lavelle who made it her mission to take on everyone on England, including this incredible nutmeg in the fourth minute.

First big chance of the game goes to the @USWNT!

All set up by @roselavelle with the killer nutmeg on Bright 💀 #FIFAWWC pic.twitter.com/XvhOtcs1Lc

Any questions about inserting Christen Press for Megan Rapinoe were silenced in the 10th minute when she landed a textbook header into the back of the net to put the United States in the lead. That goal continued a streak where USA scored in the first 12 minutes in every game.

No Rapinoe, no problem! The USWNT takes the early lead again and has now scored in the first 15 minutes in every single game this #FIFAWWC pic.twitter.com/Xqu3u0m56V

But if you thought England would just sit back, you were mistaken. Ellen White, tied with opponents Alex Morgan and Megan Rapinoe for the Golden Boot, scored her sixth World Cup goal on a nice flick and finish in the box.

Ellen White takes the lead in the Golden Boot race with her 6th goal of the #FIFAWWC. Great cross from Mead, clinical finish from White. 1-1! pic.twitter.com/U5GoaxbIRv

Seeing herself behind in the Golden Boot race, Alex Morgan stepped up and delivered a running header to put the USWNT back up and back in the lead due to having more assists than White.

Alex Morgan scores her first goal since the opening game and retakes the lead in the Golden Boot race (6 goals, 3 assists)

She's the first player in #FIFAWWC history to score on her birthday 🎂 pic.twitter.com/EGWBNIyaxI

Once the second half hit, England really took control. They caught the USA defense sleeping and had White find the space to equalize. But while they celebrated, a review showed White being just barely offside.

VAR rules out what would have been Ellen White's second goal and second equalizer of the game! #FIFAWWC pic.twitter.com/a1aCGeas4R

England attacked again through White and she was right at the goal when she went down. It looked like White whiffed her shot and went down to try and win a penalty but was initially denied. Going to VAR, it was ruled that Becky Sauerbrunn tripped White and thus England had a chance to equalize.

Ellen White couldn't get a foot on Stokes' cross, VAR took a look, and a penalty is called on Sauerbrunn! #FIFAWWC pic.twitter.com/I7kqxCMLeW

If you’re going to pinpoint the moment where Alyssa Naeher truly become the goalkeeper for the U.S. Women’s National Team, it would be here. Yes, it was a poor penalty but in a huge moment, knowing you needed to step up and keep your team alive, Naeher did just that and kept the USA ahead.

After Millie Bright got her second yellow card, the USWNT were up a player and just needed to protect their lead. Despite looking tired, they held on and even with seven minutes of stoppage time, defeated England.

Now, it’s the big show, the World Cup Final. The USWNT is in their fifth final in eight tournaments and will face familiar foe Sweden or Euro champs Netherlands. This has a very Japan circa 2011 vibe where while the United States were the favorites to win, the underdog opponent got their chance and took out the giants for their own glory. Could that happen this time, or will we see a repeat of 2015? We’ll find out Sunday.