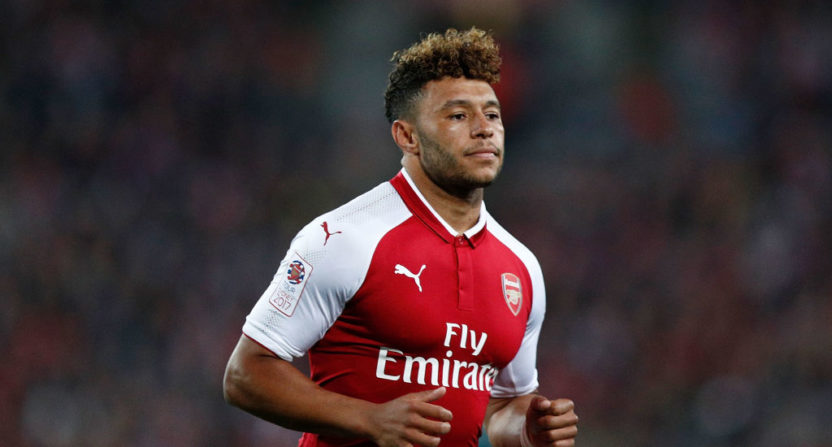 For Arsenal fans, the unfortunate reality they must face these days is that their best players eventually want to leave the club to try to win trophies. It happened with Cesc Fabregas, it happened with Robin van Persie, and now it very well may happen with Alexis Sanchez.

Sure, the club has won three FA Cups in the last four years, but that hasn’t been enough to appease the top players. They want to win more than just the domestic cup. They want to compete for the league and the Champions League as well, something that top teams like Barcelona, Real Madrid, and Bayern Munich regularly compete for.

While Arsene Wenger managed to convince top players like Sanchez and Mesut Ozil to sign for the club, the general feeling over the past decade among top players has been that Arsenal just don’t have that ambition to win the way other big teams do.

And then there’s Alex Oxlade-Chamberlain.

Alex Oxlade-Chamberlain is not a top player for Arsenal. He was supposed to be, or that’s what they had hoped for when they beat out Sir Alex Ferguson to sign the 17-year-old from Southampton. Despite showing flashes of brilliance, the Ox never became a top player, but did emerge as a very valuable squad player who can be called upon to play a role and has made 27 appearances for England. There’s nothing wrong with that, and it’s something that every top team needs.

This season would be the final year on the Ox’s contract with Arsenal and over the summer, he turned down a contract extension that would pay him £180,000 a week, which can easily be argued is way more than he’s worth. Instead of taking the money, Oxlade-Chamberlain decided Arsenal was no longer the club for him.

Alex Oxlade-Chamberlain's agency have posted the following across social media before deleting pic.twitter.com/u1crKm6pSP

Earlier this week, Arsenal agreed to look into selling Oxlade-Chamberlain, most notably to their London rivals Chelsea or Liverpool. On Wednesday, Oxlade-Chamberlain’s management company tweeted a deal was agreed with Liverpool. For Liverpool and even Chelsea, this is a great deal. They get a squad player who adds depth. In Oxlade-Chamberlain, they’re getting a player who can fill many different roles for them, but mostly can come on for the last 15-30 minutes of a game to provide fresh legs and help see out the game.

For Oxlade-Chamberlain, the move makes almost no sense. Squad players at top European clubs usually move for one of two reasons: they want to play more matches or, rarely, because they were offered more money somewhere else. It’s hard to imagine the Ox will be getting more than the £180,000 a week that Arsenal offered him at Liverpool, and certainly not if Chelsea swoops in for him.

As for playing time, whether it be Chelsea or Liverpool, Ox wouldn’t be walking into the starting XI, far from it. Whichever club he ends up at, he’ll be a squad player fighting a losing battle for a place in the team. In fact, considering that Arsene Wenger was the Ox’s biggest fan, he would have certainly started more games at Arsenal than either of those clubs.

Up until Liverpool got involved in this transfer you could have argued that Oxlade-Chamberlain would have rather just been a squad player on a team competing for trophies (Chelsea) rather than Arsenal. However since Liverpool’s ceiling is likely one of the League Cup or the FA Cup (perhaps both) that’s not much of a difference from what the Ox had at Arsenal the past few years.

This whole situation just shows you how deep Arsenal’s troubles go. Ox isn’t leaving for money, he’s not leaving for playing time and he may not be leaving for a better chance to win (more) silverware. He’s leaving because he wants to get the heck out of Arsenal.

Arsenal’s top players used to leave the club due to what they perceived as a lack of ambition. Now, their squad players feel the same way. They’re ready to flee the team even if it doesn’t improve their personal situation — in a World Cup year no less — because they have no faith in Arsene Wenger.

Right now, the only thing you hear around the Gunners are players wanting to leave, which makes you wonder who would even want to come to Arsenal? That’s a problem the Gunners will have to solve, and quick, if they don’t want to completely fall apart this season.