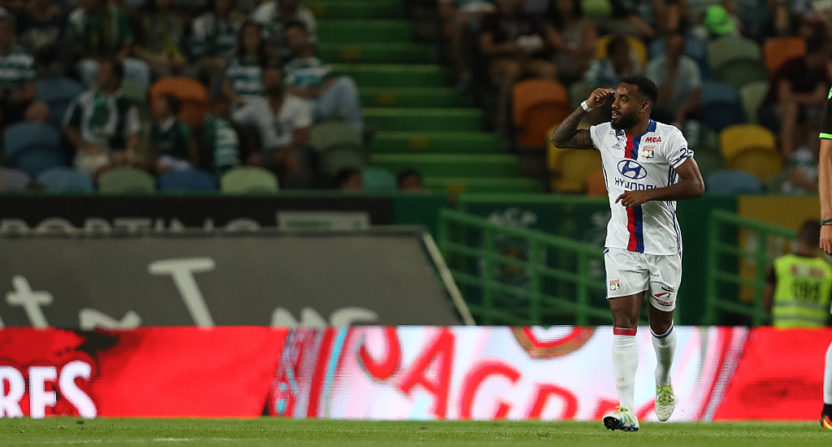 Without the prospect of Champions League nights this season, Arsenal needed something to go their way if they hoped to get back into the top four come May. The signing of Alexandre Lacazette from French club Lyon happens to be a stroke of good fortune for the London club.

With his impressive goalscoring record in France, Lacazette provides Arsene Wenger with a proven number nine, who can play a much more mobile game than someone like Olivier Giroud. There is little doubt that Lacazette’s presence on the pitch makes this good business for Arsenal. But, it might be his impact in the boardroom that might bring the biggest benefit.

? We're delighted to have @LacazetteAlex here – and we're sure you are too

Leave your messages for our new striker using #LacaNewSigning ? pic.twitter.com/9d2kAqq8mU

Starting with Lacazette the footballer, for a second. It’s easy to see why Arsenal was willing to shell out a club record £52.7m(if all incentives are met) on the French international.

Lacazette scored 35 goals last season in 42 appearances. His compatriot, Giroud scored 17 in 41 games for the Gunners. While not as talented in the air as Giroud may be as well as playing in Ligue 1 instead of the Premier League, Lacazette is still an all-around better striker. He is four year’s younger than Arsenal’s current center forward. The new signing is faster and more mobile than Giroud as well. A converted right winger, Lacazette fits nicely into the mold of the modern striker who can go and get the ball. He’s not simply a target man.

Wenger seemed to understand last season that having this kind of attack down the middle would be beneficial. With Giroud being used as more of a plan B off the bench, Wenger deployed Alexis Sanchez in a more central role quite often last year. The Chilean made 24 appearances as a center forward for Arsenal. He scored 17 goals and added 9 assists. With Lacazette on board, Wenger can turn to a goal scoring striker who isn’t playing out of position.

If Arsenal can keep the likes of Sanchez and Mesut Özil around, then the Gunners have a fearsome front three. There is little doubt that Lacazette is a brilliant signing from a tactical perspective. He’ll be the main man up front for Wenger. Goals will come for the 26-year-old, but it could be the impact he has behind the scenes that could provide the biggest boost.

A month ago, it looked all but certain that Sanchez would be leaving Arsenal this summer. Manchester City and Bayern Munich looked ready to battle it out over the 28-year-old’s signature. However, Bayern seems to have cooled their interested and Arsenal want to do everything in their power to keep him from going to a league rival. Signing Lacazette could change things.

Sanchez wants to win trophies and his ambitions lay far beyond the FA Cup. In his time with the club, Arsenal have been reluctant to spend big on the kind of superstars that could fill in around their Chilean goalscorer. Lacazette’s substantial fee show’s Arsenal is capable of spending big when they need to.

Arsenal fans have long critiqued the club for being cheap, and whether or not that’s the case, the squad has struggled for results. Robin Van Persie, the Gunner’s last outstanding striker, left town to win a Premier League title with Manchester United. Recently it seems that Arsenal was not seen as a destination for the biggest names.

Sanchez and Özil showed that Arsenal can still compete for marquee names, however. That said, it’s been a struggle to fill in around the clubs two big attacking players. Now enter Lacazette, and the London club has a trio of big names to pressure opposition defenses. It’s now about keeping them together. Arsenal will have to show they are willing to keep spending though. Sanchez is going to want a sizeable raise, and the club will need to spend money on defense if they want to be pushing for a league title.

Bringing in Lacazette is a good move for the club. He fills a need on the pitch and shows that despite missing out on the Champions League, Arsenal still have plenty of name recognition to make a splash in the transfer market. Lacazette isn’t going to be the one signing that returns Arsenal to England’s elite, but the pressure on the French star will be immense.

For a beleaguered club, like Arsenal, the pressure will be on too. Wenger needs Lacazette to fulfill his promise, and he needs to use that as the strongest possible recruiting pitch. If none of that happens, then Arsenal will be right back to where they started, as they watch the top four leave them in the dust.