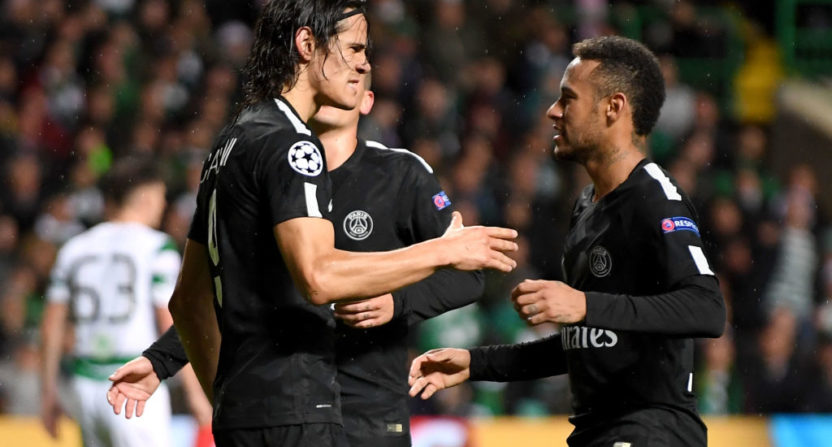 Believe it or not, it only took about a month for major drama to develop in Paris Saint Germain’s efforts to buy a Champions League trophy.

Squabbles amongst the squad were bound to develop as PSG spent hundreds of millions of dollars in bringing in Brazilian superstar Neymar from Barcelona as well as Monaco’s young starlet Kylian Mbappe. PSG spent a world record fee in activating Neymar’s 222 million Euro release deal and then followed it up by a complicated loan deal (trying to survive Financial Fair Play regulations) and will eventually spend 180 million Euros on Mbappe.

And in spite of a perfect start to the seasons, tensions appeared to flare on the pitch over the weekend between one of those new stars and one of PSG’s stalwart strikers.

Uruguayan star Edinson Cavani was PSG’s main man last year, scoring an incredible 49 goals in 50 games. And he’s been used to having to share the spotlight in the past, playing alongside the likes of Zlatan Ibrahimovic. In his four plus years in Paris, Cavani has 139 goals in 206 appearances. And now you can add to those stats a very public dispute with new signing Neymar over who in fact is going to be taking penalty kicks and free kicks.

It all went down in PSG’s Ligue 1 game against Lyon on Sunday, which PSG won 2-0 it has to be said.

First, Cavani went to take a free kick only to have the ball taken away from him by veteran right back Dani Alves. The Brazilian came over from Juventus this season on a free transfer and just so happened to hand the ball to his fellow countryman Neymar. Watch as Cavani momentarily actually tries to wrestle the ball away from Alves in disbelief before he hands it off.

Cavani wants to take a PSG free kick, but Dani Alves has the ball and he wants his BFF Neymar to take it ? pic.twitter.com/JZQzg6Teu4

To add to the confusion, Alves said after the game that it was his intention to take the free kick himself, but as the video shows, he didn’t exactly have to have it ripped out of his hands by Neymar. That kerfuffle was followed by another disagreement over who would take a PSG penalty kick.

Nobody told Cavani that Neymar gets to take PSG penalties now ? after this, Neymar might get first dibs next time! pic.twitter.com/S1cB8obYr2

Unfortunately for Cavani, he ended up missing the penalty. It probably didn’t help his concentration given he may have been nervous that Neymar would run up from behind him and take the kick for him.

PSG manager Unai Emery said afterwards that the players were supposed to set things straight on the pitch (which probably wasn’t a good idea in the first place given the massive egos and wages on hand). He then went full-on “don’t make me pull you into the principal’s office” mode.

“I have told them to sort it out between themselves,” the Spaniard declared during his postmatch news conference. “I think that they are capable of doing that and that they will both be our kickers.

“If they cannot reach an agreement, I will decide for them. I do not want this to become a problem for us.”

Unfortunately for Emery, it clearly already is a problem. Do you know why? Multiple outlets are running with the shocking breaking news that Neymar has already unfollowed Cavani on Instagram. Because that’s how people deal with their problems in the real world these days – passive-aggressive moves on social media. Just ask Kevin Durant. Cavani has said publicly there isn’t a problem with Neymar, but Instagram follows speak louder than words.

Before you wonder whether any of this matters, recall that an MLS team actually traded one of their star players after their own penalty kick drama. Columbus Crew SC leading scorer Kei Kamara was traded to New England after an ugly penalty-related dustup with Federico Higuain.

They should waltz through Ligue 1 this year even though the big spenders failed to make it five titles in a row last year when Monaco played the role of spoiler. (Signing Mbappe from their French rival will certainly help ease their domestic quest.) In spite of this drama, PSG have won their first seven games of the season by a score of 26-3, including a 5-0 thrashing of Celtic in the Champions League. Neymar could be running around the pitch trying to tackle Cavani whenever he has the ball and PSG might still not lose a game in Ligue 1 this year.

The good news is that PSG has a few months before the Champions League knockout stage, which is the only place where their season will truly be judged. That could mean Emery and company has plenty of time to get these dynamics worked out and appoint someone as the free kick taker so it’s clearly communicated to the squad. (In all honesty it should happen tomorrow if it hasn’t happened already.) The bad news is that things could go from bad to worse from a chemistry and locker room perspective. We’ve seen it numerous times over the years no matter the sport where a high-priced luxury team of superstars fail to gel together and are defeated by a team whose total is greater than the sum of its parts.

Of course, it’s highly unlikely either Neymar or Cavani could be shipped out of Paris anytime soon. (Although stranger things have happened – see Irving, Kyrie.) However, it’s a situation that still deems watching throughout the season. If PSG were to fall short of their ultimate European goal, expect that anything could happen.