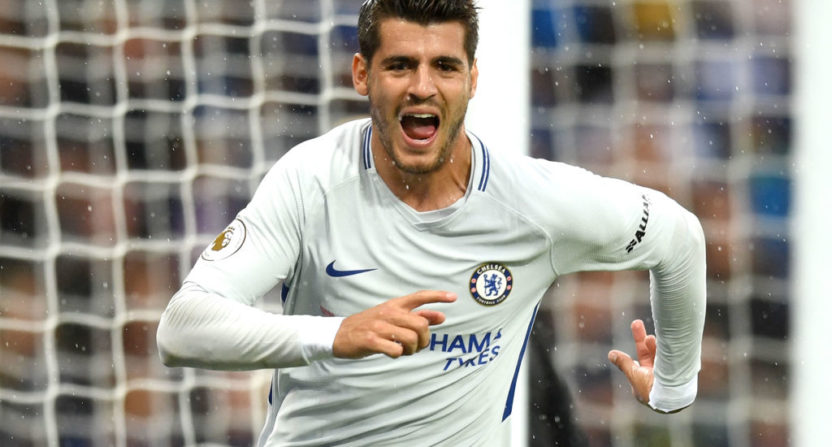 Chelsea FC and racism has been periodically linked over the years. British police reported that they deal with racist behavior from Chelsea fans than any other English team and their most notable incident showed a few  Chelsea fans pushed a black man off a stopped train in Paris while chanting “We’re racist, we’re racist, and that’s the way we like it.”

Now, racism and Chelsea seemed joined together during their 2-1 win to Leicester City. After scoring Chelsea’s first goal, visiting Chelsea fans showered newly signed striker Alvaro Morata with a song that contained an anti-semitic term. After the game, Morata and Chelsea were quick to denounce the chant and requested it not be sung.

The chant in question contains the line, “He comes from Real Madrid, he hates the fucking yids.” In soccer, the term “yid” is often used as a derogatory term against Tottenham and their fans because Tottenham has a sizable Jewish fanbase. While some Spurs fans use the word in a positive light as a way to diminish the hatred others use it for, it’s still a controversial term to use and especially not something meant to be said in a positive way by a rival team’s fans as was the case here.

In the postgame press conference, Morata and Chelsea immediately denounced the chant. A Chelsea spokesman said, “The language in that song is not acceptable at all. Alvaro has requested supporters stop singing it.”

“The club and the players appreciate the fans passionate support away from home, of course, but the language in that song is not acceptable at all.”

“I’ve spoken to Alvaro about it. Alvaro does not want to be connected with that particular song in any way and both the player and club request the supporters stop singing it with immediate effect.”

Those involved in the train incident were banned from games for five years and while it’s unknown whether or not Chelsea will do anything (if they’re able to), it should be easier to rule given it was an away game. Instead of figuring out who participated in a full stadium, you might be able to figure out who participated in the chant in a supporters section with a thousand or so people. That remains to be seen.

On top of it being anti-semitic, this chant is incredibly lazy. Morata doesn’t have any history of being anti-semitic so what they said isn’t even true. Also, they’re trying to insult Tottenham and were playing Leicester. Oh well, I can’t be shocked. Chelsea fans chant about Steven Gerrard slipping in games when they don’t play Liverpool while casually forget their beloved captain John Terry did the same thing in the 2008 UEFA Champions League Final, the thought process of some Chelsea fans is about as backwards as their racism.