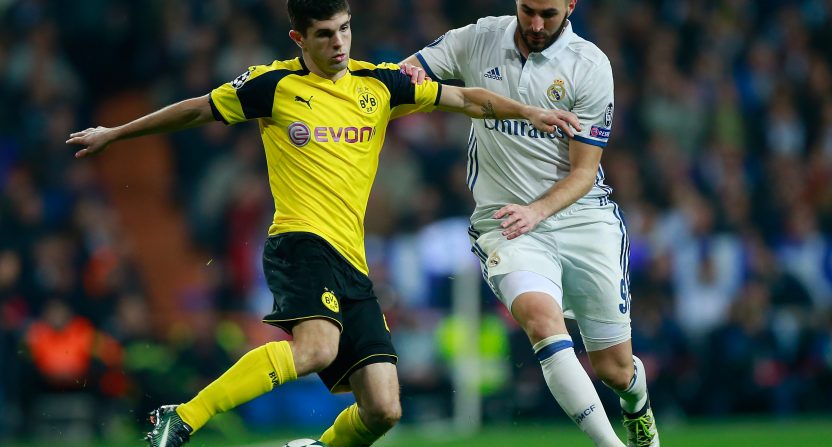 As the first half of the Bundesliga comes to a close, things are pretty much how most people expected. Bayern Munich is in first, Hamburg is hanging around the bottom of the table and a number of young Americans are making quite a name for themselves.

Among the World Cup winners and international stars, the Bundesliga is home to one of the largest collections of American talent in Europe. With varying degrees of coverage, it can be hard to keep track of many of the Americans abroad.

The Bundesliga now lays dormant until after the new year. As a result, it seemed like a perfect time to look back at the German Hinrunde and see how many of these US internationals have got on. We’ll start with the obvious, America’s golden boy.

A magical touch and finish from the USMNT Player of the Year gives Dortmund the winner in the 89th minute! https://t.co/4tNrjPTTMZ

At this point, everyone knows what they are getting with Christian Pulisic. He’s easily the best American playing anywhere in the world right now. On numerous occasions this season, the Pennsylvania native has been Dortmund’s best player. Pulisic has one assist as well as three goals this season, including a late winner against Hoffenheim on December 16. It was only Dortmund’s second win since September.

Pulisic has had bad luck with the team aspect of the sport recently. His troubles with the Men’s National team are well documented, and Dortmund has been woeful since the start of October. Pulisic has been doing his best to keep his teammates afloat, and his talent doesn’t hide in the big occasions. The US Men’s Soccer Player of the Year has looked like a veteran in some of the biggest matches. While the rest of his team fell to pieces in a November loss to Bayern Munich, Pulisic was dominant.

Pulisic’s first half is one of pure talent that unfortunately didn’t have the supporting cast to go with it. With Peter Stöger now in charge, the club has looked much stronger. That should benefit Pulisic nicely in the new year.

The big hype around Weston McKennie has less to do what he’s done, and more about what he could do. While that can be dangerous thinking (See: Julian Green) the 19-year-old has been getting his fair share of playing time in one of Germany’s best clubs this year.

Schalke 04 have had a huge season so far, sitting in second at the halfway point. It has been a much-needed improvement on last year’s tenth place finish. McKennie has been an important part of this resurgence. He’s not playing every match, but he’s added depth to Schalke’s midfield. He is still 19 so there have been some low lights. He missed a sitter vs Augsburg and lasted only 30 minutes as Dortmund overran the midfield in the Revierderby. But the good has overshadowed any negatives.

Despite still searching for his first Bundesliga goal, McKennie has impressed his coaches. As Schalke try to remain in a Champions League position, the teenager should play an important role in the second half.

This isn’t the way John Brooks envisioned his season going. The American defender has been little more than a spectator for Wolfsburg this year. After coming over in the summer for a record American price, he was expected to help Wolfsburg bounce back after a dreadful season.

Brooks was bought to replace Naldo who left Wolfsburg in 2016. The Brazilian’s absence last season nearly saw the Wolves relegated. Brooks’ reputation as a strong defender was a smart purchase, but his injury trouble has kept him sidelined.

The 24-year-old has only made seven appearances this year. He hasn’t scored in any of them but he’s been solid each time he has been fit. His passing has remained one of his strong suits. The club has played better with him in the lineup. Wolfsburg has one lost once in the seven games Brooks has made an appearance. Conversely, the club only has one win the ten matches without Brooks.

Like Brooks, Fabian Johnson has been dealing with injuries all season. Now 30, it’s looking like Johnson’s best days are behind him. Johnson has only featured in five games for Borussia Mönchengladbach. With only one goal this season, it’s looking like he’s going to have a hard time getting back into the squad.

When fit, Johnson has had to deal with competing with younger players like Nico Elvidi and Thorgan Hazard. Both Elvidi and Hazard are under 25 and occupy positions that Johnson has played in the past. If Johnson can get healthy he would certainly bolster Gladbach’s depth, which could seriously help them get back into the Champions League. All is not lost, but Johnson needs to use the winter break to get back in shape.

Things are bleak once again in Hamburg. If it weren’t for 1. FC Köln, Hamburg would be sitting at the bottom of the table. Bobby Wood hasn’t done much to help alleviate that problem. In 11 appearances and nearly 1000 minutes of game time, Wood has one goal. It’s not as if Wood isn’t getting any chances. He’s averaging 1.4 shots on target per match. That isn’t great, but it should result in more than a single goal. His finishing hasn’t been there this season.

To be fair to Wood, the finishing isn’t there for anyone in Hamburg. André Hahn is the club’s leading scorer with a massive two goals. Wood is going to have to be one of the players that steps up if Hamburg remains the only club to participate in every single Bundesliga season.