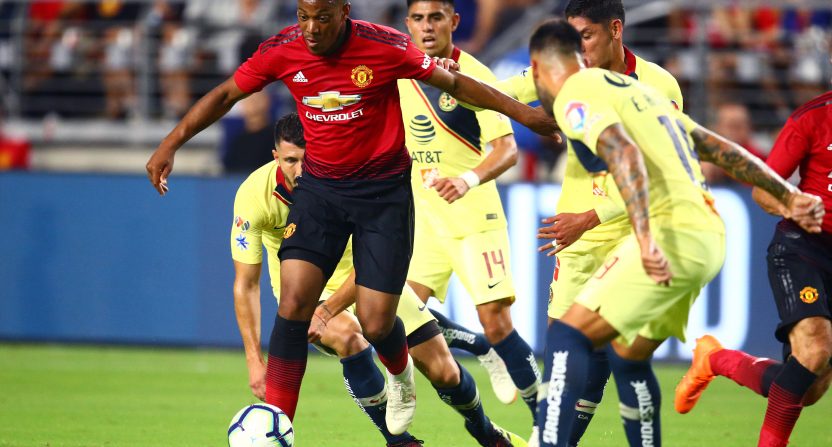 The Premier League season kicks off on Friday and so far the summer transfer news has been a lot more smoke than fire. With very few notable new arrivals to the Premier League it’s hard to predict who is going to be this year’s breakout star.

Sometimes instead of looking for something new, we should look at what we already have. Manchester United are doing exactly that this season. The result will be a breakout season from Anthony Martial.

Ole Gunnar Solskjaer looks set to deploy Martial as a center forward this year, the same position he played when he arrived at Old Trafford. Whether that’s as a lone striker or paired with Marcus Rashford remains to be seen.

At 19-years-old, Martial was a bright spot in an otherwise dreary Louis van Gaal season. The Frenchman scored 11 league goals for a team that only scored 55.

That summer, Van Gaal left and was replaced by Jose Mourinho, a manager who famously doesn’t work well with young players.  Mourinho and Martial’s relationship couldn’t have gotten off to a worse start. He immediately stripped Martial of his no. 9 shirt, giving that to new signing Zlatan Ibrahimovic.

Mourinho’s concern that the pair of teenagers weren’t ready to lead United’s line was valid. Moving for a player like Zlatan as a temporary solution was a good idea. But Mourinho never even gave Martial a chance to play as a striker, and a year later he moved for the much younger Romelu Lukaku.

The message was clear. Martial’s future was on the wing.

There is concern among United fans that the club doesn’t have a ‘proven goalscorer.’ The club is looking to sell Lukaku but the idea that they aren’t replacing him is false. What United are doing is swapping left wing Anthony Martial for striker Anthony Martial.

They’ve done this before. From 2007 to 2009, Wayne Rooney was often shuttled out wide to accommodate Cristiano Ronaldo. He scored 12 league goals in each of those seasons. When Ronaldo left United didn’t replace him, they simply moved Rooney to the no. 9 role and he scored 26 goals.

Playing Martial on the wing does have some benefits, but it’s clear that he’s at his best in front of goal. He gets a lot of touches in the box and gets a lot of high percentage shots. His conversion rate is one of the best in the Premier League, making him one of the most efficient goal scorers. 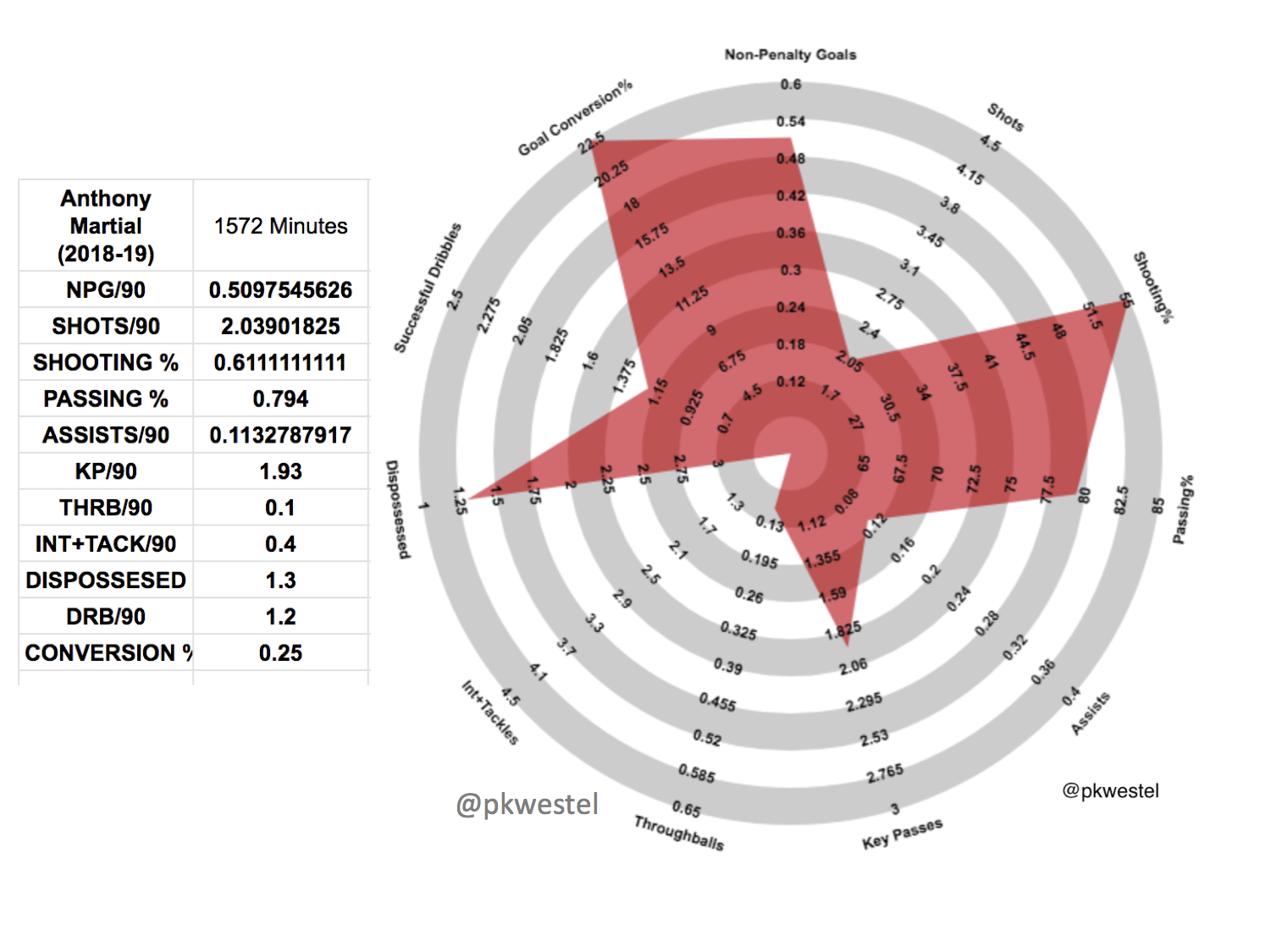 Moving Martial to a more central role will put him in front of goal more often. The idea is he’ll get more touches in the opponents box and significantly increase the amount of shots he gets. For a player that converts shots at a high rate, logic says that should translate into more goals.

Not all fans are sold on the idea of Martial moving back to the middle. They deem him as lazy and unable to make the runs required of a striker.

It’s true Martial’s runs haven’t been there in the past few years but can you blame him? Jose Mourinho is a very strict tactician. He doesn’t give players freedom to run all over the pitch. If Martial tries to make a run in behind and United turn the ball over, he’d be out of position, which doesn’t fly with the defensive minded Mourinho.

Considering that Martial was one of the most scrutinized players under Mourinho, if he didn’t do exactly what the coach asked he didn’t play. Therefore it’s understandable that he still had his conservative tendencies in the early parts of Solskjaer’s reign.

As for Martial’s attitude and work rate, there’s no question that it was a problem towards the end of last season. There were even reports that Solskjaer was looking to sell him this summer (a move which was ultimately blocked by the Glazers).

Martial’s attitude and work rate aren’t going to be an issue this year and there’s one major reason why.

Go back to the 2017/18 season. Martial was on fire, scoring 11 goals and adding eight assists from the left wing over the first four and a half months of the season. His form earned him his first French call up in over a year. He was firmly in Didier Deschamps’ plans.

Then United signed Alexis Sanchez and Mourinho jettisoned Martial to the bench. He started just four more games all season, picking up one assist and was left off the French squad for the World Cup.

That summer, he sat on his couch watching France win the World Cup.

Martial is motivated to get back to the national team. He knows that Solskjaer can help him get where he wants. He can help him be a better striker. That’s his ticket to fighting for European glory with France next summer.

Solskjaer is ready to show his faith in Martial (as of Thursday morning, just two days before the season, United still hadn’t released their squad numbers, an indication that they may be waiting for Lukaku to leave and return the no. 9 shirt to Martial). Martial will be ready to repay him.

In 2006, Sir Alex Ferguson sold Ruud van Nistelrooy to Real Madrid after the striker scored 26 goals the previous season. Ferguson didn’t look to bring in replacements. He trusted that 19-year-old Cristiano Ronaldo, who scored nine goals the previous year, was ready to take his place.

Martial isn’t Ronaldo, but he’s a tremendous talent. United are ready to show their faith in him, and he’s ready to reward them for it.