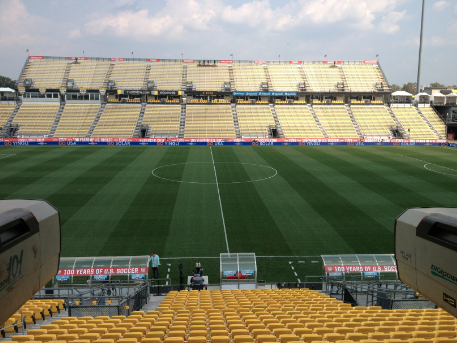 Columbus Crew Stadium (now Mapfre Stadium for sponsorship purposes) is one of the great landmarks in American soccer. Built in 1999, it was the first soccer-specific stadium in MLS, a historic leap for the fledgling professional league.

Over the years, Crew Stadium has also become the spiritual home of the United States Men’s National Team, hosting the all-important World Cup Qualifier against Mexico for the last five World Cup cycles. Until a loss in the 2018 cycle, Crew Stadium maintained a mythical quality about it as the USA had won four consecutive qualifiers against Mexico all by a 2-0 scoreline. Columbus has also hosted games at the 2003 Women’s World Cup and several important games for the USWNT as well.

Crew Stadium has a very proud history, but its present is becoming sadder by the day all thanks to absentee owner Anthony Precourt.

As Precourt goes all in on his efforts to move the Columbus Crew to Austin, Texas, what has happened at Crew Stadium under his watch (or lack thereof) should trouble all American soccer fans.

First, the local CBS affiliate in Columbus reported on several health code violations found at concessions stands throughout the stadium. This included discoveries of “mouse droppings” as well as drainage issues. Then there were delicious soft pretzels covered with a wet towel to prevent them from drying out. After the violations were documented, the stadium later passed a follow-up inspection.

Second, this past weekend Crew Stadium hosted its annual “Rock on the Range” music festival. Columbus Navigator shared pictures from one Twitter user who documented several issues in the stadium’s Upper 90 Club. The area that’s supposed to be a luxurious section of the stadium is covered with water damage and leaks in the ceiling. The attendee noted the shambolic nature of the stadium and how it had a negative impact on visitors to the festival.

This is the same Upper 90 Club that was described as a “surreal scene” when it was decked out for Precourt’s introduction as the Crew’s new owner back in 2013.

1) I had a great time at #RockOnTheRange this weekend. Absolute blast. But I was embarrassed by the condition of the Upper 90 Club. Water stains all over the ceiling and floor, and the ones right above the doorway to the bathroom were actively dripping brown water onto the floor, pic.twitter.com/BRwXHLsUYT

2) and onto anyone who tried to walk by. People paid a huge amount of money to have access to the “luxury” of the Upper 90 Club this weekend, and this is what they were treated to. Also the draft beer wouldn’t stay cold because the keg room downstairs wasn’t holding the correct

3) temperature. Not to mention the questionable status of the food coming out of the kitchen. We get visitors from all over the country, and even some from out of the country for this event, and it was appalling to see how @APrecourt has let Crew Stadium fall apart.

4) He has literally just let it start to crumble around us. @austintexasgov @MayorAdler this is the slumlord you’re considering getting into bed with. @MayorGinther we can find a new, local owner who can represent us better than this. #SaveTheCrew

Perhaps it’s not fair to expect Precourt to roll up his sleeves and grab a sponge to help clean up these messes, but that would involve an actual commitment to the team and the stadium that he still indeed owns. (Maybe he could use one of those #MLS2ATX astroturf scarves that Crew fans are footing the bill for instead of a sponge.) Nevertheless, as long as Precourt is the owner of the team and the stadium, he’s the one ultimately responsible for its current appalling condition.

Sure, Crew Stadium has never been perfect. And it’s been passed by in the last 20 years by other state-of-the-art stadiums built around MLS. Even before Precourt bought the team, the stadium scoreboard famously caught on fire.

However, given its importance to the history of American soccer, Crew Stadium should at least be treated with a baseline level of respect and decency. Sadly, that is something that Precourt refuses to give ever since the plan to move the team to Austin was publicly revealed. The #SavetheCrew movement has been called a “shadow front office” by the Ohio Attorney General for putting more effort into working for the franchise than the entirety of Precourt Sports Ventures. With the above evidence in place, that is painfully obvious to see.

It’s sad and pathetic to see PSV totally abandon their responsibilities to the patrons of Mapfre Stadium, whether they come for Crew games or other special events. Unfortunately, it’s not a surprise given how brazen Precourt and Co. have been in their pursuit of Austin. This is after all the same ownership that lashed out at their own fans in Columbus, blaming them for the obstacles that have arisen in their dream move. While Crew Stadium is in disarray, PSV executive Dave Greeley tries to sell Austin on their shell game by telling them Precourt had his bachelor party there. Seriously.

When Precourt bought the team from the Hunt Family in 2013, he called them “great stewards” and cited the “tremendous history” of the Columbus Crew franchise. From these recent testimonies, it’s clear that Precourt is nowhere near that standard as an MLS team owner. And both he and the league should be held accountable for the shame that the attempted relocation of the Columbus Crew continues to bring to American soccer.