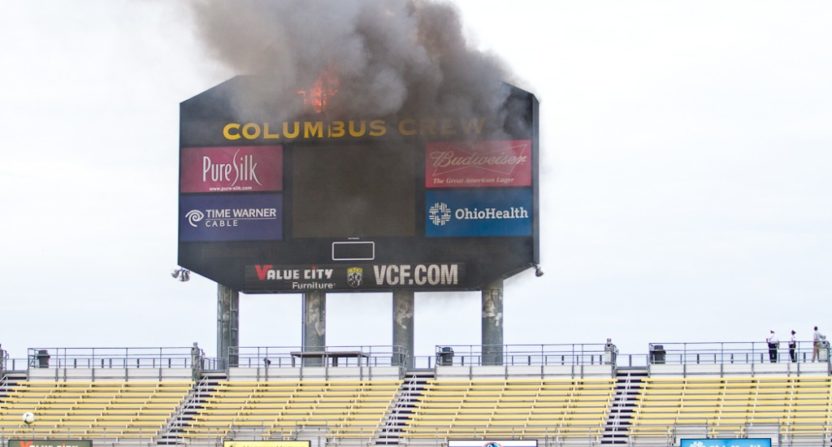 Late last night, it was revealed that Columbus Crew SC owner Anthony Precourt looked into and decided to move to Austin, TX. This morning, Precourt confirmed the reports and is looking into a possible move to Austin.

“Despite our investments and efforts, the current course is not sustainable,” Anthony Precourt, chief executive officer of Precourt Sports Ventures and chairman of Columbus Crew SC, said. “This Club has ambition to be a standard bearer in MLS, therefore we have no choice but to expand and explore all of our options. This includes a possible move to Austin, which is the largest metropolitan area in North America without a major league sports franchise. Soccer is the world’s game, and with Austin’s growing presence as an international city, combined with its strong multicultural foundation, MLS in Austin could be an ideal fit.”

MLS Commissioner Don Garber supported Precourt’s search for a new stadium whether that is in Columbus, Austin or elsewhere.

“As attendance League-wide continues to grow on a record-setting pace, and markets across the country seek to join MLS, Columbus’ situation is particularly concerning,” said MLS Commissioner Don Garber. “Despite PSV’s significant investments and improvements on and off the field, Columbus Crew SC is near the bottom of the League in all business metrics and the Club’s stadium is no longer competitive with other venues across MLS. The League is very reluctant to allow teams to relocate, but based on these factors, we support PSV’s efforts to explore options outside of Columbus, including Austin, provided they find a suitable stadium location.”

It seems both are holding out hope that Columbus could still be saved. When the Hunt family sold the Kansas City Wizards, there was talk about moving them to different places if they didn’t get a stadium. It helped that the team was sold to local owners so they gave it their all to get a stadium in KC but when they did, the Wizards became Sporting KC and four trophies and over 100 consecutive sold out games later, the rest is history.

That could be the case for Columbus but Precourt doesn’t have local ties so it’s not as personal for him to stay and it seems Precourt wants public money from Columbus for his stadium, which isn’t going to happen. Also, when you see fan reaction to the news, whatever hope there was to keep the Crew in Columbus may have ended with this news.

I mean really, the replies to this tweet seem to appear that the bridge (or scoreboard) has been burned for Precourt and MLS in Columbus.

You sign an awful TV deal, secretly talk w another city, refuse to sell the team to CBus businesses, then blame us?

Social media staff, please know that I’m not yelling at you when I say this. You guys are good.

EAT ALL THE DICKS

What has he done besides buy the club? Worst marketing &TV deal in the league and you blame the location of the stadium? This was a work.

y yall gotta do this before the playoffs

Smoke and mirrors, have the moving trucks already been hired? #Crew96 #CrewSC

Let's see. The team was mediocre & u signed a TV deal with TWC that limits the viewing audience and you blame the fans and stadium? Fuck you

Precourt has been lying this whole time. He signed a shitty TV deal and refuses to sell to Columbus. Crew has just been a project to him. pic.twitter.com/6kEuw0SHCH

The irony of this photo showing balls when the owner doesn't have any.

You have some gall hectoring me to renew my tickets (albeit unsuccessfully) knowing you were going to leave.

@APrecourt Stop trying to placate people. We are all aware there is no room for a stadium downtown.

@APrecourt just sell the team dirt bag. that team has done more for the City than your stupid ass

you’re saying bye unless Austin doesn’t buy you a stadium. then, you’d stay in CBus until you find another way out. Go to hell @APrecourt

The rest kind of follow the same format. The timing is definitely something because the team has started to renew season tickets for next year (the likely final year in Columbus) and is set to be in the MLS Cup Playoffs. Many say that maybe attendance would be better if they won games but while they currently sit 5th, they do have a chance to get the 2nd seed and a first round bye so it’s not like the team is terrible. It seems like a predetermined effort to move and nothing will keep that from happening.

I’m not going to tell any Crew fan how to react to something like this. If fans choose to boycott the team, MLS and soccer in general, they are well within their right. I would hope they don’t but I don’t really blame them if they did.

If there is one thing I would suggest to fans would be to choose exactly where to direct your hate. If you want to hate Anthony Precourt for moving the team or hate Don Garber for letting it happen, hate them. But take it out on those who are going to financially benefit from this deal, rather than employees working day-to-day in the offices. You yelling at the ticket rep or the social media person may make you feel better and feel like you made your point to “the man” but most likely the people within the team who most interact with fans are not only losing the team that they love, they’re probably out of a job too. Maybe some will be able to relocate to Austin but uprooting your life and moving to another part of the country may not be ideal either. And it’s probably still too far away for any of them to know if their job is safe so a lot of people in Columbus Crew offices are uneasy about their future.

So when your ticket rep calls about going to games next season, take a breath and maybe not take out all your anger on the person who is doing their job for however long they’re able to. They probably feel your pain as well because their team is leaving as well. And then if you ever get a chance to talk to Anthony Precourt, go nuts and unleash your outrage onto him.