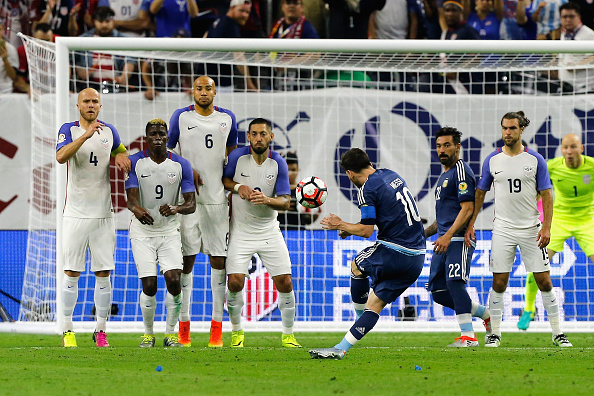 Jurgen Klinsmann came in to Copa America Centenario trying to erase the moniker of the United State men’s national team as the underdog. His team’s biggest chance to do just that came on Tuesday night as they took on No. 1 in the world — Argentina.

That chance was erased quickly, though, as the American defense was pushed hard from the opening kick and never got its footing. After DeAndre Yedlin hammered a ball out to safety beyond the end line, Argentina took a short corner kick and Messi went to work.

Following a great pass off the short corner from Ezequiel Lavezzi to Messi, Lavezzi watched the USMNT defense suck in and Messi did the same. It resulted in Lavezzi on a free header about eight yards out and Brad Guzan catching himself in no man’s land.

Just three minutes in and the underdogs were behind on the scoreboard, 1-0.

It was more of the same throughout the first half, with Argentina running possession and running the USMNT ragged when they did have any of the ball at their feet.

Messi was the pest he has been his entire career throughout the half as well and produced a few incredible chances for his side. However, it was his own foot that did the damage thanks to the USMNT taking him down about 30 yards out.

What resulted was Messi giving us perhaps the best free kick of his illustrious career.

It also just so happened to mean that Messi became the all-time leader in international goals for Argentina, netting his 55th career goal for La Albiceleste.

Simply put, the USMNT defense had no answer for Messi and the rest of the team couldn’t find a way to get any sustained possession or semblance of togetherness going either.

It left many wondering if it was Argentina just being that good or the Yanks simply not having the mettle to stand with the world’s No. 1 team.

The second half…well, the USMNT didn’t give up in spirit.

However, it did give up another early goal as Gonzalo Higuain was put through on goal and only an unlucky bounce off the initial save by Guzan gave the Argentine a second crack. He put that one away in the 50th minute and it was 3-0.

For the USMNT, a glimmer of hope came with the halftime sub of Christian Pulisic for forward Chris Wondolowski. The 17-year-old came in to insert more energy and attack for the red, white and blue and he did just that.

His pace down the left wing gave Argentina a few moments of worry, but ultimately nothing would come from his efforts down the win and in the box. Instead, few other options opened up and passes to a streaking Pulisic were often off target or intercepted en route.

Captain Michael Bradley was often a victim of the latter and it was indicative of his night and tournament to date. He couldn’t find connecting passes most of the night and his first touch often let him down.

All of it culminated in Argentina’s final goal of the game in the 86th minute of action, as a bad pass out of the back in the middle was also mis-timed by Steve Birnbaum and Messi was spot on to pounce on the ball in the middle of the field.

Messi looked up and hit a streaking Higuain in stride for an easy goal past Guzan and a 4-0 scoreline.

Simply put, the USMNT came in to the tournament hoping to shred the underdog card and it came out of it playing like a team that should’ve rightfully been thought of as just that.

There’s still one more match for both teams, as the USMNT takes on the loser of Colombia and Peru in Phoenix, Ariz. and Argentina looks to take on the winner and end a long drought of major international competition championships.

A performance like this certainly will send a message to either of their South American opposition coming up in New Jersey this weekend.