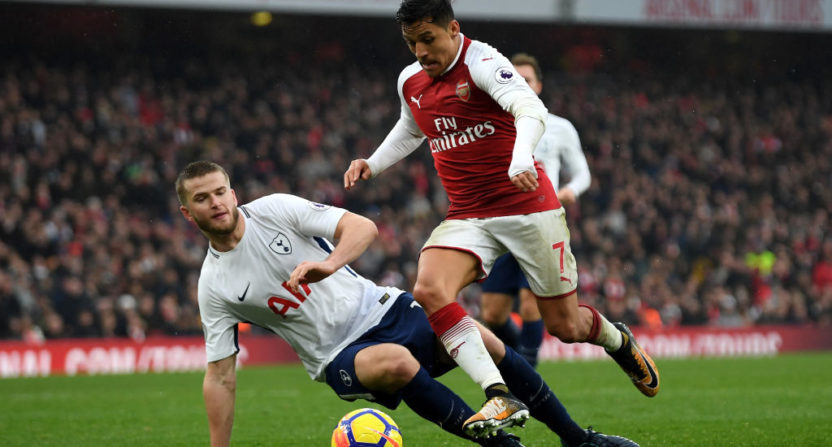 In North London derbies since about 2008 or 2009, Tottenham always came in looking to prove something against their bitter rivals from down the road. They wanted to let Arsenal, the better team, know that they were always ready to pounce. It made those games intensely competitive, and allowed inferior Spurs teams on paper to finally draw even with their rivals on most days, and on a few, finally beat them.

But since Mauricio Pochettino arrived, the paradigm shifted. Spurs have become the team with the target on their back, and Arsenal are suddenly the team hungry to remind their rival that they need to remember about their old friends down the road. Tottenham this year are the team that already proved themselves by comprehensively beating Real Madrid in the Champions League, and Arsenal were the one scraping to a draw on a Thursday night against Red Star Belgrade. It was all setting up for Spurs to stamp their dominance in North London. That is, until Arsenal channeled what their hated rivals used to give them fits for years.

Arsenal showed a desperation that Arsene Wenger teams almost never showed, even in Derbies. They came out hungry to prove something, even though many thought they were the inferior team on paper. Arsene Wenger started Alexis Sanchez, Mesut Ozil and Alexandre Lacazette all at the same time, and it befuddled Spurs just a little bit. Ozil for one may have had his best game in Arsenal colors, both in terms of creativity and defensive workrate. For a player that was consistently drawing the ire of Arsenal fans, it was a seminal performance. Defensively, Arsenal looked solid and stout, and made Spurs look weak and rattled. It’s as if the expected roles were reversed.

The situation of the season and the table made Arsenal desperate to not get left behind as Spurs continued to charge up the table and in Europe, and they played like it. They wanted to remind North London, and England, that they still have something to say at the top echelon of the Premier League. It’s a desperation, a determination that Arsenal fans wanted their team to show in big games for years and they never did. In derbies past, it’s been the reason why better Arsenal teams were held and/or lost to Tottenham.

That isn’t to say Spurs weren’t motivated to win; Pochettino clearly understands the importance of this rivalry in particular and with the cohort of Tottenham players that are now mainstays, they understand more than ever what this game means, especially now that their team might be in the ascendancy. But what they didn’t expect was how desperate Arsenal was to show that they still belong and that they don’t want to be left behind. Spurs played as poor a game as they had in a while, and plenty of that was Arsenal leaving everything on the pitch in a game they knew defined the rest of their season for better or worse. It didn’t matter that both Arsenal goals, particularly Mustafi’s, were marginally offside, and the foul that lead to the Mustafi set piece chance wasn’t much of a foul. Arsenal played the game as if their reputation depended on the game and it showed.

It will leave Spurs with a bitter taste in their mouth knowing how poorly they played in a fixture they have dominated for three years, not just on the pitch but psycologically. Even in three straight 1-1 draws at the Emirates, Spurs came away happier, and carried that into games at White Hart Lane. That changed today, and while it hasn’t thrown Tottenham’s rise off course, it certainly put a dent in the mystique that may be building on one side of North London.

Unlike what had been the established norm for the past 20 years in North London, Spurs are the team on the rise and Arsenal is the team trying to find itself. That hasn’t changed in spite of what happened today, but what Arsenal proved today is that they are still around, they still care, and that they aren’t going quietly. Maybe Spurs needed that reminder to not take this for granted, but they certainly received a wake up call.

By channeling what their most hated rivals did for years to try to prove themselves, Arsenal proved the same to Spurs. It’s certainly a role reversal, but one those on the red side of North London’s chasm won’t mind having channeled this one time.