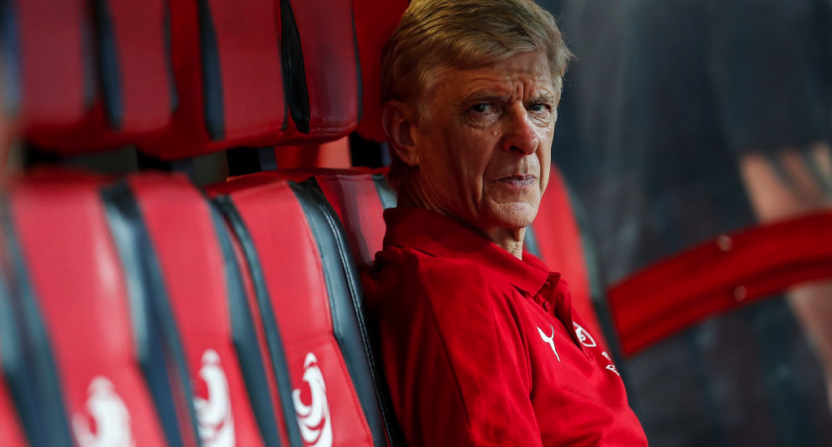 Right around the time that Premier League fans on the east coast of the United States were waking up Friday morning, news broke that Arsene Wenger would be stepping down as manager of Arsenal after 22 seasons. The move has been a few years in the making as the #WengerOut movement among Arsenal fans has gotten louder and louder in recent seasons.

Despite the fact that Arsenal fans have been trying to run Wenger out of town for a few years, nostalgia predictably kicked in as soon as the news broke. Arsenal fans flocked to social media to say their thanks to Arsene Wenger for all the good years he gave the club, and despite not having much to cheer about in recent years, there is certainly a lot of success to thank him for.

Now I hope you’re sitting down because there’s a hot take coming here. The reason that the league looks so different is because of Arsene Wenger. In fact, the meteoric success of the Premier League can very easily be traced back to Arsene Wenger.

You could make a reasonable case that Arsene Wenger is the most important person in the history of the Premier League.

Bill Barnwell is an Arsenal fan so it’s not surprising that he has this take. For those familiar with my work, you would know that I am most certainly not an Arsenal fan. That’s why, as an avid weekly attendee of the church of Sir Alex Ferguson, when I first saw it my immediate reaction, and possibly yours too, was “Um, haven’t you ever heard of Sir Alex Ferguson, Bill?”

But then I thought about it some more and it turns out Bill is right. Sir Alex Ferguson was certainly more successful, but it’s hard to find a person more important than Wenger.

And then there were the players. These days footballers are nearly perfect specimens where every part of their bodies is monitored nearly 24/7. When Wenger took over at Arsenal, footballers were still, well they still fit that stereotype we used to have of English footballers. Guys who went out and worked hard during the game but certainly didn’t shy away from hitting the pubs after the games or practices.

Wenger changed that. All of it. Upon taking over at Highbury, he changed the way Arsenal players trained. He stressed healthy eating and modernized training tactics in order to get the most out of his players. He immediately began signing a large influx of foreign players, and began to change the style in which Arsenal played.

Suddenly Arsenal were the most exciting team in England. They were playing a style unseen before in the Premier League and the league couldn’t handle it. Wenger had immediate success at Arsenal. In his first full season, they won the League and FA Cup double. They would repeat that feat again four years later. In his first decade at the club, Wenger won the league three times and the FA Cup four times, a level of success that was unheard of in recent years for anyone that wasn’t Manchester United.

It can be argued that Wenger’s success is what made Sir Alex Ferguson and Manchester United even better. Prior to Wenger, no one had really challenged Ferguson’s Premier League supremacy. Wenger’s style of play, and success that came with it, forced Ferguson to adapt to a new league. The fact that he was able to is a testament to his greatness but it actually took him years to fully accomplish that.

In the meantime, Manchester United and Arsenal began battling it out at the top of the league. From 1997/98 through 2003/04 the two teams won every Premier League title and five of the seven FA Cups (they would then meet in the 2005 FA Cup final where Arsenal won on penalties).

More importantly, the two teams battled on the field. When Arsenal and Manchester United met in the early ’00s it was an event. In the same way that Larry Bird and Magic Johnson were credited with saving the NBA in the 1980s, Manchester United vs. Arsenal – Ferguson vs. Wenger – is what put the Premier League on the global map at the turn of the century.

Would the Premier League have taken off in the United States if it weren’t for Wenger’s Invincibles and the battles with Manchester United? We’ll never know the answer to that but we do know this, Manchester United vs. Liverpool never had a pizza throwing incident heard round the world. And while Barcelona vs. Real Madrid may be the biggest game in the world, it’s hard to say that the whole of La Liga has really taken off stateside the way that the Premier League has from top to bottom.

From a US perspective, it’s unfortunate for Wenger that the Premier League became truly visible and popular in the US only after 2004. Not enough Americans saw or remember his finest moments.

It was because of Wenger’s success at the Arsenal that opened the door for Jose Mourinho’s dominant Chelsea teams. It’s because of Wenger that the league looks the way it does, with a massive amount of international players and unfortunately very little English talent.

In a cruel twist of irony, it was Wenger’s success that was ultimately his greatest flaw. He changed the game for the good, but unlike Ferguson, once the rest of the league changed with him and caught up, he couldn’t adapt to it. He didn’t have another move in his pocket and eventually teams like Chelsea, Manchester City, and even Tottenham were able to pass him by.

The last few years have been sad for Arsene Wenger. But for anyone in America who wakes up every Saturday morning and easily watches the Premier League on NBCSN, we ultimately owe that to what Arsene Wenger did at the turn of the century.