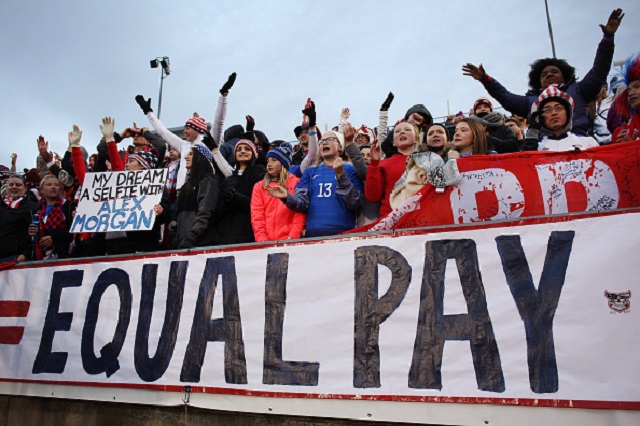 Fans in the stands for the U.S. women’s national team two games against Colombia over five days held up signs in support of the players’ standoff with U.S. Soccer over equal pay.

And as if to make emphasize that point, the Lady Yanks dismantled their opponents twice, by a cumulative score of 10-0, on Sunday and last Wednesday. Against the very same Colombia team that had given them trouble in their round of 16 game on their march to the 2015 Women’s World Cup title.

Then, to further drive home their message, co-captain Carli Lloyd penned an essay in Monday’s New York Times to lay out their case once more. “The simple truth is that U.S. Soccer projects that our team will generate a profit of $5.2 million in 2017,” Lloyd wrote, “while the men are forecast to lose almost $1 million.”

The U.S. women want to be paid the same as the men’s national team.

And U.S. Soccer must know that its position is fairly well indefensible. How, in this day and age, and with the added scrutiny, do you justify paying women less than men for doing the same work, after all? That just doesn’t fly anymore. Thankfully.

The groundswell of support for the United States women’s national team in the wake of its gender discrimination complaint with the federal Equal Employment Opportunity Commission has been staggering, yet also kind of predictable.

This is exactly the sort of thing that animates people online, the modern court of public opinion, and soon enough, Trevor Noah and his Daily Show followed up, leaning on several bits of wrong information — the wage gap isn’t as big as the disproved numbers he quoted suggest — yet nevertheless making salient points and sound arguments. But if this was a scandal that was tailor-made for the Internet Age, the injustice stands all the same. Simply because the clamor was somewhat misinformed — this case is ever so complex, courtesy of U.S. Soccer’s opaque finances, which are intertwined with Soccer United Marketing, a division of Major League Soccer — and its conclusions simplistic didn’t mean that the outrage wasn’t right and just.

The United States Soccer Federation, admitting that it was surprised by the filing, scrambled to put out a response. A hasty statement missed the mark. And on a call with a few reporters, president Sunil Gulati argued that the women’s pay should in some way be correlated to the revenue they earn. This has become the federation’s defense.

This line of reasoning rests on shaky ground. Not least because the numbers on which team drives the most revenue are disputed — U.S. Soccer says it’s the men; the women says they do. The USSF’s own financial statements, meanwhile, read that the senior men’s program also racked up three times as many costs in 2015 — a Women’s World Cup year, no less.

There’s one major problem with this argument. A deep and unassailable flaw.

U.S. Soccer is a non-profit.

It’s supposed to do the right thing because it’s the right thing to do. That’s the point of a non-profit. A pursuit of revenues certainly isn’t anathema to that mission, as it helps fund the whole thing and, in this instance, grows the sport. The federation has an obligation to the sport to handle its financial affairs responsibly. But paying the women’s team less, as U.S. Soccer acknowledges it does, is simply wrong. And if the federation’s mission really is to “promote and govern soccer in the United States in order to make it the preeminent sport,” as it claims on its tax-exempt return, what kind of message does it send when it’s also saying, by paying women less, that the female side of the game is somehow less worthy?

The federation points to its role as a leader in developing the women’s game. And it certainly is that. But the next stage in that process is to compensate them fairly. We can quibble over what the women actually generate in terms of revenue but what’s plain is that they are far more successful than the men and have certainly made a larger cultural footprint in our country. In that regard, they bring greater prestige and recognition to the federation, which in turn, helps it spread the good word of soccer.

Even if that isn’t necessarily reflected in dollars and cents — and we don’t know that it isn’t — that’s worth something too. Worth a lot, in fact. Then there’s the probability that revenue is a red herring anyway. If the men’s program drives more revenue, that’s partially because it gets more investment — again, three-to-one in 2015 — allowing them to generate more money. To say that the men should earn more because they make more money for the federation is, in a sense, circular logic, because they also make more money thanks to the added investment.

Yet this all remains beside the point.

U.S. Soccer isn’t a business. It doesn’t pay taxes like one. And so it doesn’t get to make the argument that revenues are the final truth on how its employees are compensated. Non-profits exist to do what’s right.

And in this instance, what’s right ought to be obvious.