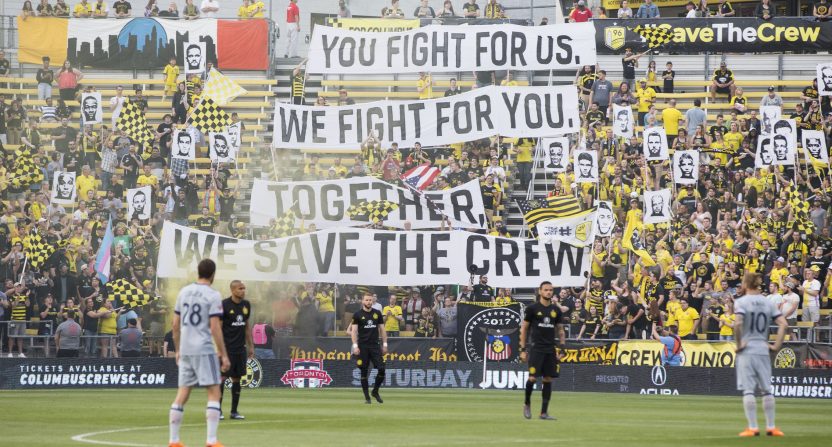 Cleveland Browns owner Jimmy Haslam and local investors led by real estate developer Peter Edwards are on track to enter into MLS as new owners of the Columbus Crew, bringing to a hopeful end one of the most dramatic recent sagas in American professional sports.

We are still waiting on the press conference where Jimmy Haslam is wearing a Columbus Crew scarf and the renderings are released for a new downtown stadium. But that appears to be a matter of when, not if. All of the pivotal players — Haslam, Major League Soccer, and the local Columbus business community through the Columbus Partnership — released statements that indicated a deal was on its way.

Most importantly, it seems as if the details of the complicated game of millionaire musical chairs have already been worked out.

1) The “new” Crew owned by Haslam and co. will technically be an “expansion” team as new investors in MLS with operating rights in Columbus. MLS’s expansion fee is $150 million.
2) In spite of the “expansion” label, the existing franchise (players and infrastructure included) will remain intact in Columbus under new ownership. A new downtown stadium will likely be part of the deal as well.
3) The Scrooge McDuck of MLS, Anthony Precourt, will be free to pursue his queso-filled dreams in Austin with his slice of the MLS pie in tact. However, Austin FC will for all intents and purposes be the expansion club and may not begin play until 2021.

The news came as suddenly as the original news of the team possibly leaving did almost a year ago to the day, although the emotions couldn’t be more divergent. When the news broke that the Columbus Crew were exploring relocation to Austin, Texas it was a punch to the gut for a fanbase that has been a pioneer in supporting American soccer. Columbus was the first to build a soccer-specific stadium in MLS, and has served as a spiritual home of the United States Men’s National Team. The potential relocation came as a shock to everybody in the city and around Major League Soccer.

Likewise, the Friday announcement that the Crew were going to stay brought another jolt to Columbus. But this one sent fans into a euphoric state of celebration. Everything had been very quiet on the #SavetheCrew front over the last month, which perhaps was a sign that there was some serious negotiating happening behind the scenes. But to the public, the revelation that the Cleveland Browns owner was leading the charge to save the Crew was simply stunning.

It’s the sweetest bit of poetic justice. After all, it was the relocation of the Cleveland Browns and the creation of the “Modell Law” in Ohio that gave Columbus a fighting chance to keep its soccer team. That lawsuit and the threat of ongoing litigation had to be a driving factor in coming to an agreement on a settlement like this. Local government officials have insisted that the suit will continue until the ink is dry on a new ownership structure for the Crew, which is probably wise. Other cities and states around the country would be smart to put similar protections in place for their constituents when public funds and community assets are at stake.

And if the deal does get finalized as it has been floated out there, it is nothing less than a complete and total victory for #SavetheCrew. Columbus Crew fans could not have asked for anything better in this package. An owner with NFL credentials who dwarfs anything Precourt could bring to the table ten times over, local investors who are committed to growing the fanbase and going all-in with the Crew, and a new downtown stadium. Most importantly, the synergy and energy present between ownership, local leaders, and the fanbase will mean that the New Crew simply cannot fail.

How did it happen against all odds? How did #SavetheCrew beat the system when it seemed like the system had the deck stacked against them?

#SaveDtheCrew does not happen without A) the incredible efforts of #SavetheCrew, B) the Modell Law, C) the widespread support from across the soccer world, and D) a billionaire owner and local ownership that stepped up to the plate and convinced MLS that it could not say no to keeping the league in Columbus. All of those factors combined to give this story the ending that it truly will deserve.

For the last year, #SavetheCrew has worked day and night for their team. Of course, their work isn’t over until the deal gets finalized. And if Haslam and company are smart, they will realize they have a fanbase that is willing to go to lengths never before seen for their team. Can you imagine how amazing it will be to actually see ownership work together with this incredible force? The possibilities are endless.

#SavetheCrew showed the best of sports: the power to bring people together. And they showed fans around the country and around the world they do indeed have a voice that matters and they can make a difference in their community. And that’s a victory that may be just as important as Saving the Crew.