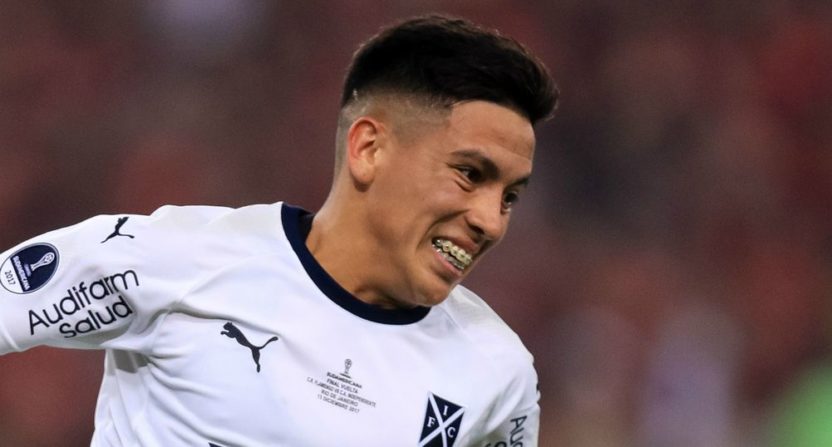 If you told any MLS observer 10 years ago that a club would pay $15 million in transfer fees for one player within the next 10 years, they’d think you were nuts. But then again, no one saw the way MLS would rapidly expand, nor Atlanta United spending money even Toronto FC and LA Galaxy are blushing at. After protracted negotiations, today Atlanta United confirmed the worst kept secret in the league that they have acquired young Argentine winger Ezequiel Barco for that astronomical sum.

This transfer smashes the old outgoing record, which was Toronto FC paying $10 million for Michael Bradley from Roma a few years ago. That didn’t quite blow MLS’ transfer structure out of the water because Bradley was a unique case, and one most everyone thought would never be replicated, until Atlanta United came in that is. To buy two players: Miguel Almiron and Barco, they’ve spent $23.5 million in transfer fees, which is more than some teams have spent in transfer fees for their entire history. Plenty of clubs have financial clout, but few were willing to wield it like Atlanta has. And now, the rest of the league is going to have to catch up.

Rumors have had New York Red Bulls spending $6.5 million on an Argentine winger of their own, but that deal has yet to be completed. With GAM and TAM, clubs have spent big to acquire players inside the league as well, including Dom Dwyer’s move to Orlando and Philadelphia’s swooping for David Accam. But even with GAM, TAM and the numerous mechanisms that MLS salary rules allow, spending $15 million on a transfer fee alone is a watershed moment for the league.

MLS has tried desperately to keep the league on an even playing field for years with their arcane salary budget rules that enforce parity, while trying to add a few outs so that bigger teams aren’t entirely shackled by the restrictions. Everyone has basically stayed in line, with the exception of Toronto FC and a few big contracts from other teams for aging European stars. Atlanta is a team who has come in and rewrote the rulebook. Even LAFC, who haven’t exactly shied away from spending cash, aren’t coming close to what Atlanta United is pulling off, although Atlanta has a one year head start.

One of the fears MLS has had for years was a league sorting itself based on spending eventually, even with the artificial parity. Perhaps it warmed some hearts to see perennial big spenders LA Galaxy flop last year, but consider that since 2011, only Sporting KC has become an MLS champ and also be considered a “low spending” team. Otherwise, it’s been the Galaxy, Timbers, Sounders and TFC, all who don’t mind flashing their cash. Getting to MLS Cup is one thing, but winning it turns out to be another story entirely when big money is on the line.

How will the league react? In the past, they’ve actually told teams they can’t spend huge money on certain players (Paul Mariner wanted to give a DP contract to Olof Mellberg, for instance, and the league told him “no”), but now, they’re opening up the doors to the wild west. Salary budget rules do exist, but if Atlanta can put together what they have without running afoul of league “rules”, other teams could certainly do the same. The question is whether other teams will be willing to do so.

MLS has plenty of teams that are willing to spend, but then there are teams like New England, Chicago, Columbus, Colorado and Philadelphia among others who either don’t have the financial clout that the big boys do, or just don’t want to spend that kind of money. They risk getting left behind fast in a league that is becoming more polarized based on financial resources than ever before despite the league’s best effort to ensure that doesn’t happen. Barco isn’t destined to spend a long career with Atlanta United because Europe will come calling, but unless other teams can start producing players worth those astronomical fees, or their owners invest more, they’re going to get left behind and fast.

How good Barco is becomes irrelevant, largely because the club spent the fee to begin with. Pandora’s box has now been opened, and what’s inside will change MLS in ways not seen since the Designated Player was introduced. Will clubs be forced to spend beyond their means for players to compete, or will a stratification emerge between the have’s and have-not’s in MLS as its appeared in the rest of the world?

Ezequiel Barco’s mammoth move changes the league, and the next question is how everyone adapts to that change.