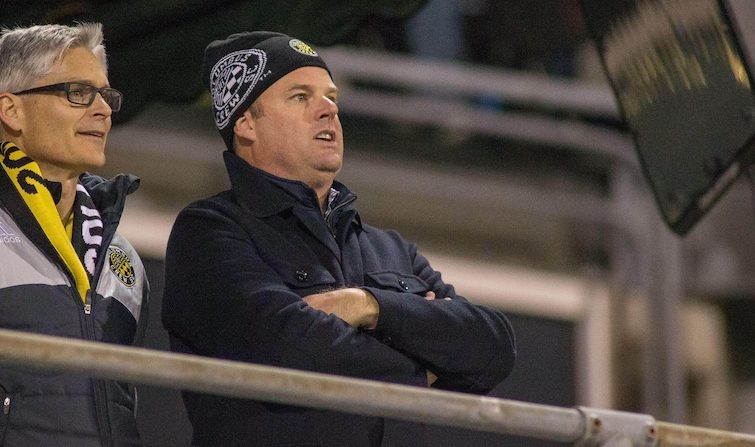 While most of the attention of the #SavetheCrew movement has been focused on the efforts of the local fans in Columbus and the state’s lawsuit over the Modell Law on trying to keep their team, the most important factor for the Crew’s future may just be what actually happens in Austin, Texas.

It’s almost been forgotten about amongst the legal wrangling in Ohio, but what about Austin’s receptiveness to Precourt’s overtures?

With a stadium study done and a proposal from Precourt Sports Ventures to Austin, the table is set for crunch time negotiations. But as that time draws near, resistance is starting to become public in the Texas capital.

Austin city Council member Leslie Pool (whose district is home to the proposed McKalla Place stadium site) sees the PSV proposal that has the team receive tens of millions in tax breaks while “renting” the public land for a measly $1 per year as a bad deal for the city.

Of course it’s a bad deal for Austin, which is one of the reasons why Precourt has tried to hammer through an agreement with the city before everyone learns of the finer details. PSV has imposed a totally artificial deadline of the end of June to come to an agreement with the city in order to start play in Austin in 2019, which is ironic because it’s their lack of official relocation notice that is creating problems for them in the lawsuit with the state of Ohio.

To her credit, Pool sees right through it, comparing the tactics used by PSV in Austin to that of a used car salesman in an interview with the Columbus Dispatch. Columbus Crew fans would probably argue that the comparison is actually an insult to that profession of selling used cars.

“They’ve pointed to boondoggles, that you’re being hoodwinked when people create a false sense of urgency, that you have to do it now because if you don’t do it now then this deal is going to go away,” Pool said. “That’s a time-honored approach for a used-car salesman. ‘This car isn’t going to be here at this price tomorrow.’ I’m constitutionally reluctant to be pushed like that. That’s not fair and it’s not a public process in my mind.

“That’s not how a governmental entity should be making policy or decisions for the taxpayers.”

Pool argued that PSV, based on its proposal, is attempting to privatize public land.

“They want all the benefit from it — the gate fees, the merchandise, concessions, advertising, you name it — and they don’t want to pay property taxes and (want to) keep all the revenue,” she said. “They want to privatize this public land and then require the city of Austin taxpayers to shoulder that tax burden and pay for those benefits for them. They haven’t given me any reason except that it’s soccer, which I don’t think really rises to the (acceptable) level. That’s a concern.”

Almost on cue, Precourt Sports Ventures President Dave Greeley lived up to Pool’s criticism of the ownership group. Somehow, Greeley reacted to Pool’s comments by thinking it was a good idea to double down on the totally artificial deadline. In a quote to the Austin American-Statesman, Greeley confirmed that Austin really does have a truly once-in-a-lifetime opportunity that will disappear if they don’t act now and ignore all the fine print.

“We appreciate and respect all of the process,” PSV President Dave Greeley said. “If the city seriously wants to consider an RFP process, they should. We would just tell them that we want MLS to Austin in March of 2019, and the reality is that there is time sensitivity attached to this.

And you really wonder why this is going poorly for Precourt?

One reason for Precourt’s rushed timeline may be potential competition in the marketplace. With a USL team that has local ownership and a stadium plan already in place at the Circuit of the Americas aiming for a 2019 start as well, it makes Precourt’s uncertain situation in Austin all the more desperate.

What may be most alarming was that Pool also openly questioned the character and integrity of both Precourt and MLS. The attempted relocation of the Crew has brought a constant stream of negative publicity to the league and we’ve covered the unconsiconable conduct and deplorable deception from Precourt throughout this saga in depth. It’s not just Columbus, though, as the city of San Antonio even came out and basically said MLS acted unfairly and unethically in their expansion process and the secret “Austin clause” given to Precourt.

“I am learning some things about the reputation of the owners and frankly about the leadership, if I can be blunt, of MLS as an institution that gives rise to serious concerns on my part that they would be a group that we would want to enter into this kind of big-stakes financial deals,” she said. “I don’t know if I would want to partner with folks who have that kind of a reputation of pulling up stakes and moving a team. It’s not in the dead of night like some of the football teams that have been moved, but it has had similar repercussions and it’s clearly unfair to the people who have given their heart and soul over to the brand and the team.

Even the most ardent #SavetheCrew supporter would agree that Austin is a great city that deserves a major pro sports team. The question now for Austin is whether or not Precourt is the right person to make it happen. If mistrust of Precourt is making inroads into Austin and causing hesitation in partnering with PSV/MLS, it could be a fatal blow to the attempted relocation process.