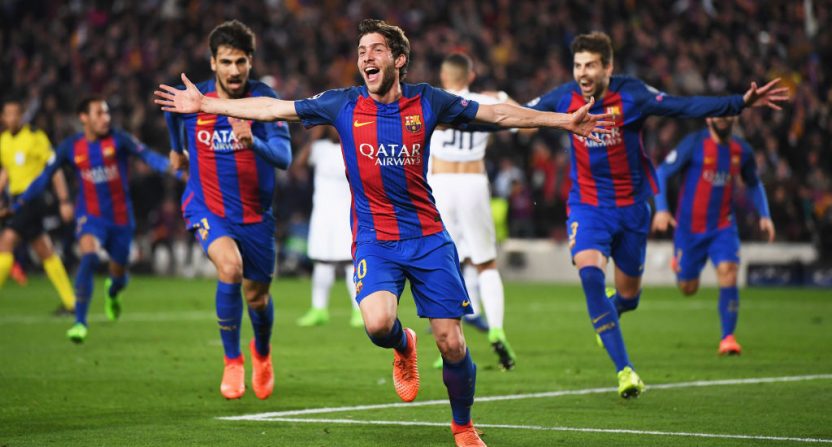 In the weeks leading up to Barcelona vs. PSG, everyone saw Barcelona as the team who could maybe pull off an unprecedented 4-0 deficit. But even for Barcelona it would be massively tough to overcome that. There’s a reason why nobody had ever done that in the UEFA Champions League.

But after an incredible comeback, subsequent setback and three more goals in the final minutes, Barcelona pulled off the unbelievable in a 6-1 thriller (6-5 aggregate) to advance to the Champions League quarterfinal.

Barcelona got things started as early as they could. It wasn’t the prettiest goal, but Luis Suarez was able to get the final touch and got the scoring started in the 3rd minute.

This didn’t really make PSG nervous. The French champions were still up 4-1 on aggregate and still had things in control. It wasn’t until a 40th minute own goal by Layvin Kurzawa from an Andres Iniesta back heel that got them a bit nervous entering halftime.

Things got worse for PSG when a penalty resulted in Barcelona’s third goal of the day. All of a sudden, it was 4-3 on aggregate with 40 minutes left and Barcelona had the power of Camp Nou behind them.

Then in the 62nd minute, it seemed like the bottom fell out of Barcelona. A defensive lapse allowed Edinson Cavani open and unleash a stunning volley with the outside of his foot while open in the box. That goal was huge for PSG, giving them the tiebreaking away goal and a 5-3 lead on aggregate. So a one goal deficit from Barcelona turned into a three goal deficit with just a half hour left.

But that didn’t deter Barcelona. They sure left it late but the 88th minute seemed like the right time for the Spanish champs. Neymar scored a free kick, then Suarez won a penalty that allowed Neymar to score again in a matter of a couple minutes. Now with five minutes of stoppage time, this all of a sudden became a 5-5 slobberknocker and PSG had their backs up against the wall.

Then, quite possibly the most unlikely of heroes, defensive sub Sergi Roberto got on the end of Neymar’s hopeful ball in the box and pulled off the historic win. After everybody thinking they could do it, to thinking they couldn’t, Barcelona escaped with a 6-5 aggregate win on literally the final kick of the game.

A lot has happened in between these two games. Barcelona manager Luis Enrique announced he would step down after this season. But at the same time, Barcelona had won every La Liga game over the past month and sit a point ahead of Real Madrid while Real has a game in hand.

Now that Barcelona arguably faced, and passed, their toughest test in years, this should get Barcelona back on track for the treble race. They lead La Liga, are in the Copa del Rey Final against Alaves and advance to the final eight in Champions League, a tournament where they were the favorites. After PSG, Barcelona may not be the favorites to win anymore, but they have proven to everyone to never count them out.