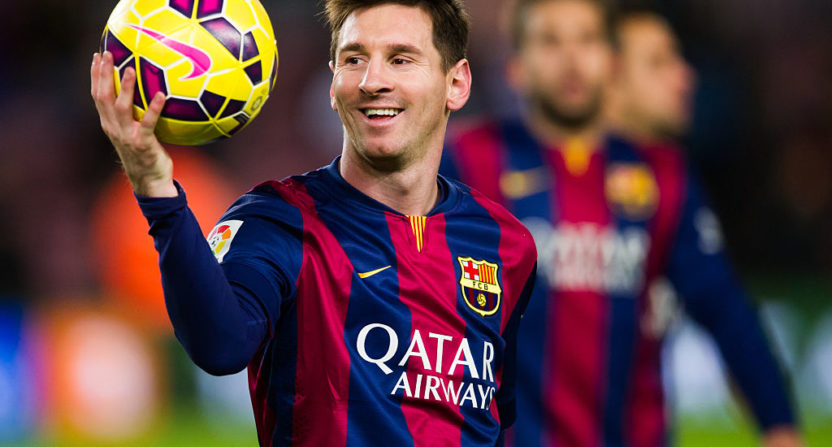 When you have one of the top players in the world, you do whatever you can to keep him on the roster. Barcelona has done that by working out a three-year contract extension with Lionel Messi that will keep him with the club until 2021, according to reports Wednesday morning.

Messi was entering the final year on his contract, so Barcelona wasted no time and made sure he wouldn’t be tempted by the rest of the soccer universe. According to a statement from FC Barcelona, the deal will officially be signed in the coming weeks. Messi will be paid quite well, and it will be difficult for Barcelona to separate from him in the next few years, as the reported terms of the new deal include a €300 million release clause.

Lionel Messi has extended his Barcelona contract until 2021, with a €300 million buy-out clause.

“The Club is very happy with both the renewal and the commitment of Messi, the best player in history, who has played his full professional career at Barça and has led the team to an era of extraordinary success, the likes of which has never been seen in world football,” a club statement said.

Messi has been quite the prolific scorer during his time with Barcelona, which started in 2004. In 583 games, Messi has scored 507 goals and recorded 37 hat tricks, all while helping the club win four Champions League titles.

Messi’s contract news comes shortly after the latest headlines surrounding Messi’s legal and financial trouble have come to light. Just recently, Messi was reported to allegedly be hiding tens of millions of euros of money behind his charitable efforts. But Barcelona has taken a stance in defending their international superstar before, like the time they ignited a social media campaign to gather support for Messi amid a tax-evasion scandal.

And now the support will continue for at least a few more years.