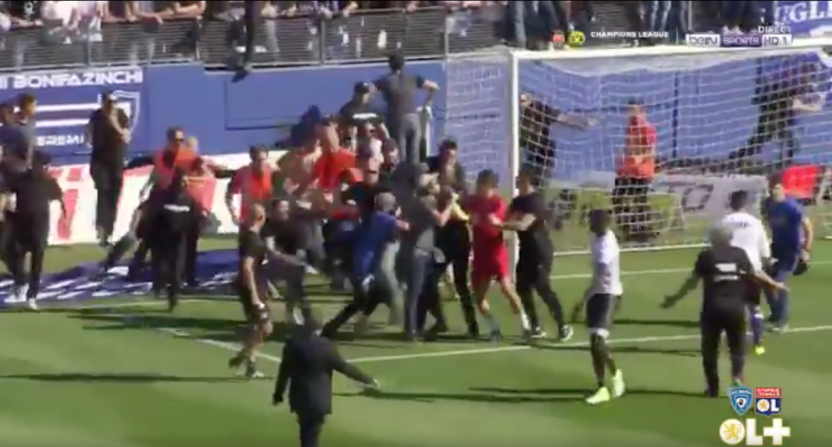 Olympique Lyonnais has had a terrible week. On Thursday, Besiktas and Lyon fans fought in the stands before their Europa League quarterfinal, causing Lyon fans to go on the pitch as Besiktas fans threw fireworks and other things from the upper level. After a delay, the game started and Lyon won 2-1.

Despite Lyon’s Twitter account claiming that players didn’t feel like going out to play, the game started after an hour delay and ended 0-0 after one half. A second confrontation between Bastia fans and Lyon players caused the game to be abandoned altogether. And since it’s so late in the season, there is a very good chance the game (or at least the second half) won’t be made up. Lyon is mathematically eliminated from Champions League qualification anyway but they currently sit 4th, two points ahead of Bordeaux for Europa League qualification. Bastia remains in last and sit three points away from safety. This could cause them to relegate out of the top French league.

The first confrontation started while teams were warming up. According to Lyon, Bastia players were throwing balls at goalkeeper Mathieu Gorgelin as he was warming up. Gorgelin and Memphis threw the balls back and that resulted in Bastia players to storm the pitch. Bastia fans have grown a reputation after one fan racially abused Mario Balotelli and another fan hit Lucas Moura with an object in separate games earlier this season.

There didn’t seem to be any injuries but it sure continued a terrible week in soccer when it comes to safety. From Ross Barkley being punched in the face at a club to the Dortmund bus attack to Leicester fans fighting with police in Madrid to the Lyon-Besiktas fight to Panamanian midfielder Amilcar Henriquez being murdered, it’s been a week to forget.